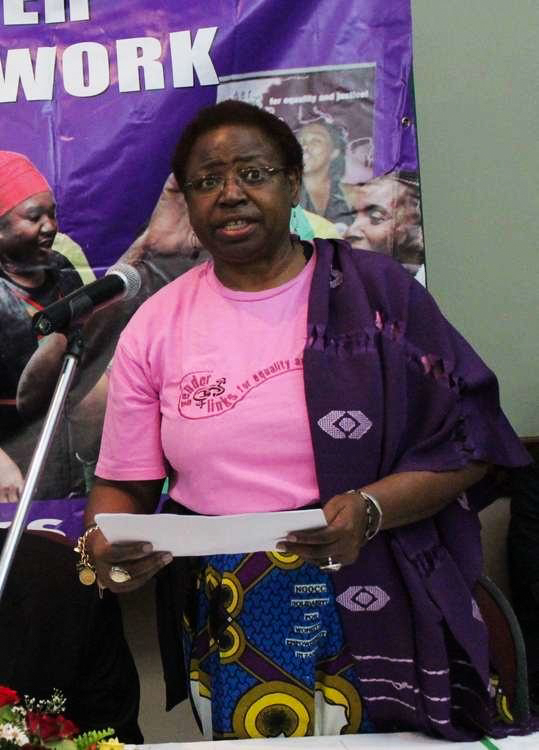 Sara Hlupekile Longwe is an internationally renowned feminist activist from Zambia. She visited Oberlin Feb. 16 to give a talk titled, “Organizing to Tackle Women’s Issues in Lusaka Zambia,” which detailed her experience with gender disparities in Zambia as well as her experiences creating and organizing women’s collective action groups there. She is known as one of the foremost figures in Zambian activism, often referred to as the founder of the women’s movement in Zambia. She is the author of the Longwe Framework for Gender Analysis, a radical guide to planning and enacting gender-based equality work, and in 2003 was awarded the Africa Prize for Leadership. Longwe’s visit kicked off Oberlin’s 2018 Global Issues Symposium, which will run until April 27.

How did you first become interested in gender activism?

I had been a school teacher for just under three months. I was pregnant, already in my fifth month, so I applied for maternity leave. Then I discovered the difficult struggle that women go through when they are doing wage employment.

I discovered that all married women in [civil] service at the time were temporary employees. So, if you are a temporary employee, you are not entitled to go on leave or anything. Although I had applied for unpaid leave, I discovered I could not be given leave because I was married and therefore was a temporary employee. And I discovered that actually it wasn’t just me; that was the norm. So, if you were employed while you were single, as soon as you got married, you became a temporary employee and whatever benefits you had, you didn’t keep. You didn’t get housing, you didn’t get laundry facilities, and you got taxed more because a woman’s wage was seen as extra. And married women who were working in civil service did not receive a child allowance. Even with unmarried women who could not receive child allowance, it was always paid through the father of those kids. So, if your husband didn’t work for the civil service, then you missed out on the allowance.

So I did a bit of research because I was very surprised — I knew that Zambia had ratified the [International Labor Organization] convention of paid maternity leave for 90 days, and I discovered that they hadn’t implemented it. I had to resign and then I came back to teaching as a temporary employee. So I said, “Okay, because I’m married I’ll always be a temporary employee anyway, so now, let me be a part-time teacher,” but I was persuaded to be a full-time teacher and with my colleagues we decided to fight. Why should women be temporary employees or worse?

What was going through your mind when you discovered all of these injustices in the education system?

Well, I knew all along they were wrong, and because I have been fighting injustice in my own family, in my upbringing, I know that if you speak out, you are listened to. And if you have more people listening to you, you make more headway. I discovered that I should get maternity leave if Zambia ratified the ILO convention. So when I didn’t, I said loudly and clearly to all my colleagues, “I’m not teaching anymore because of this,” and they all explained to me, “Didn’t you know?” I said, “No, I didn’t.”

I managed to find friends who also said, “We can’t have this.” So, we formed a research group because finding the data for discrimination was difficult. And in the 1970s we couldn’t register because any organization that’s talking about women’s rights was seen as trouble, and then you never got the registration. So after this, we started to continue working as a loose group and gave ourselves a name. By then, I had gone back to work as a teacher and as a group we decided: we need to come up with a submission to the inquiry on improving civil servants’ work conditions and we need to do research.

I remember doing my own research to find out why I couldn’t have maternity leave and I discovered all those discriminatory things that I didn’t know before. So I took a week’s leave from my teaching and did the research and we made the submission. A year later, most of the things we complained about were changed: permanent employment, paid maternity leave for 90 days, and married women could get loans.

As time went on, people started making organizations, thematic ones. In 1980, it was a few groups max, maybe one or two. But when it came to 1985, we had several more organizations. We formed a committee so that we can collectively look for money, so that we can collectively decide what are the issues and divide among ourselves so that when we go to the international conferences on women’s issues, people can go to different sections and speak out and join forces combating the discrimination that is in our country. When we came back from a conference in Nairobi, we decided: We can’t continue working in silence. Let’s make an umbrella group of women’s organizations.

We registered our organization as the Zambia Association for Research and Development. From the name you can’t tell whether it’s a women’s movement or not. We had to camouflage our feminist intention because once they got a wind of it, you would get de-registered. The feminist thing was not in the title, but was in our constitution and in our objectives and [it] decided who became a member. And our membership, we had to open it to men as well, you see? So, it wasn’t just a women’s organization. In that way, we were able to camouflage our true purpose.

When you first started out, just noticing this one injustice of not being able to take maternity leave, did you ever imagine that you would be part of something that could grow to this scale?

Yes. We were optimistic, and that’s what we’re aiming at because in developing countries, you stand out like a sore thumb when you are speaking about issues on gender inequality. And of course, you get labeled and mimicked. Eventually we realized that inter-organization, inter-regional, and global coalitions or interaction were the best way forward because governments, even in our own country, will just accept gender inequality. But when they are out there at these meetings, they camouflage it, they say, “we have no discrimination.” That’s why we shadowed them and the organizations like IWRAW. If a human rights report is being given, the U.N. will ask in that country — the civil society — “What’s your report?” We then give our shadow report. In the country, they won’t accept feminist or gender equality or gender issues, to be candid. But now that we are in the 21st century, we can finally say what it is really we are fighting.

We can even now proudly say, “I am a feminist.” Although they will still call you names, you can explain: Feminism is about fighting inequality between males and females and bringing about tranquility and happiness. What’s wrong with that?