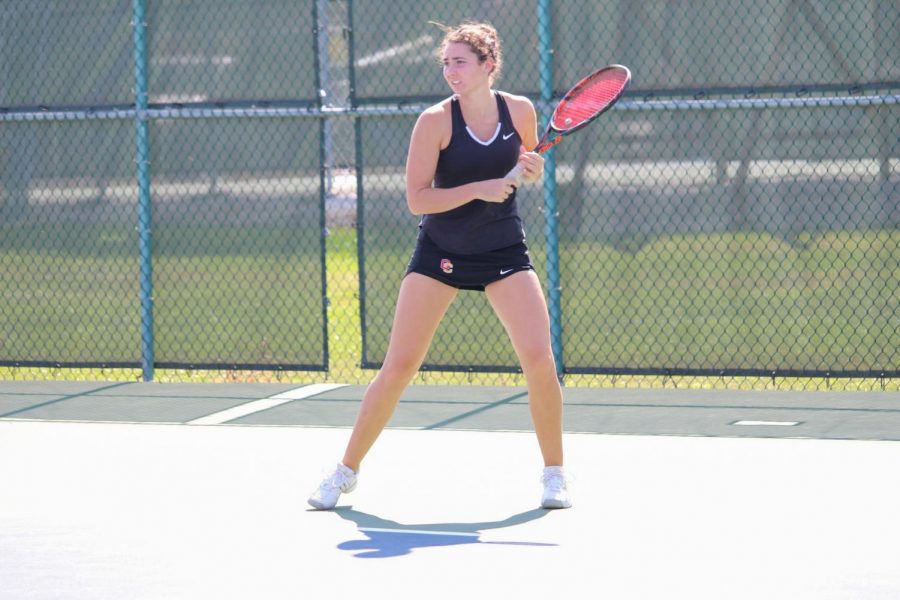 Sophomore Lena Rich prepares to return a serve at the Intercollegiate Tennis Association Central Regionals in September. Rich and her doubles partner, senior Mayada Audeh, had a decisive 8–4 win Saturday against Kalamazoo College.

The Yeowomen tennis team traveled to Michigan for back-to-back games against the Hope College Flying Dutch and the Kalamazoo College Hornets last weekend. Despite dropping the first match 3–6 to the number 21 ranked Flying Dutch, the Yeowomen closed out their road trip with a 6–3 win against the Hornets, raising them to 5–5 for the season. As they continue preparing for North Coast Athletic Conference play in April, the Yeowomen also look to improve on their third-place finish in the conference tournament last season.

“We are playing at a really good level right now,” Head Coach Constantine Ananiadis said. “We’re fit, strong, and — although our match against Hope College [was around four and a half hours long] — we’re used to this kind of stress. I wasn’t too worried about making it through the Saturday match against Kalamazoo College.”

Against the Hornets, the Yeowomen started the match strongly, winning two of their three doubles games. Without top player and senior Sarah Hughes, the remaining doubles players had to step up to the challenge. First, sophomores Rainie Heck and Delaney Black earned an 8–6 win to begin the day. Senior Mayada Audeh and sophomore Lena Rich then had a decisive 8–4 win.

In singles, however, the Yeowomen got off to a slow start. Heck played in the top spot for the first time this season, replacing the injured Hughes, but was unable to capitalize. She dropped her match in straight sets, 6–3 and 6–0. However, the Yeowomen were quick to bounce back, as Audeh and fellow senior Jackie McDermott won their matches in the number two- and three-spots, respectively. Black also delivered with a win at the number-five spot, but in the end, it came down to first-year Maja Shaw Todorovic — who was put in the lineup to replace Hughes. Her 6–1, 6–2 victory at the number-six spot gave the Yeowomen the match 6–3.

Black said Sunday’s win was a testament to her team’s resiliency this season.

“We played two close matches with a couple of injuries and a few lineup changes, [and our performance showed] just how strong we are this year,” Black said. “We’re facing strong opponents outside of our conference and getting a good look at some different styles. This way, we’ll be ready for whatever the conference tournament has in store for us.”

The Yeowomen did not fare as well against the Flying Dutch Saturday. Hope College proved why they’re one of the top 25 teams in the country by winning two of the three doubles matches, including a game against McDermott and Hughes, then continuing to dominate in singles as well. Rich and Black managed to earn singles wins, but their efforts were not enough, and the Yeowomen fell to the Flying Dutch 3–6.

While the Yeowomen have just a .500 record this year, Todorovic is excited to be on the team, both for their competitive drive and their camaraderie.

“I’m so close with my team members,” Todorovic said. “They’re so welcoming and don’t make me feel like the only first-year on the team at all. Honestly, I don’t even think of the seniors as seniors. They’re just three more of my closest friends.”

The Yeowomen have seven more matches — including four in Orlando, FL, over spring break — before conference play kicks off. But before then, they will have to focus their energy on today’s match against the University of Rochester Yellowjackets at 6:30 p.m.

Moving forward, Ananiadis is more concerned with his team’s progression than their place in the standings as they approach conference play.

“We really don’t pay attention to our record,” he said. “Every year we play a super tough schedule — including games against several national ranked Division III schools, as well as games against Division I and II schools. It’s all about the process. Are we better than we were in the fall? Are we better than we were last month? Last week? Yesterday? That’s how we evaluate ourselves.”