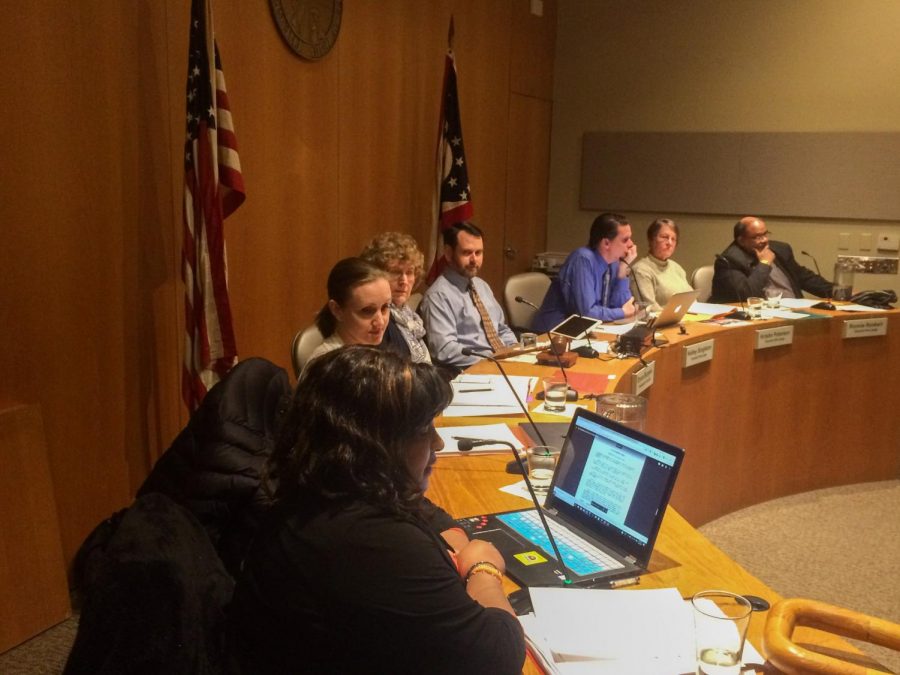 City Councilmembers discuss the NEXUS pipeline settlement prior to voting. Council voted unanimously against NEXUS, a shift from the previous vote of 4–3 in favor of the settlement last month.

Oberlin City Council voted unanimously to reject a proposed settlement with NEXUS Gas Transmission Monday night. The council was previously split on accepting a deal with NEXUS, voting 4–3 for the deal at the previous meeting on Feb. 20.

The meeting contrasted with earlier hearings on the settlement. At the Feb. 20 meeting, students both picketed and directly addressed members of council, but on Monday those in attendance were silent and reserved. Students held signs and provided emotional testimony on the pipeline’s impacts, but were also conciliatory towards counselors.

“We recognize that the chanting in the last meeting was perceived by some as disruptive and disrespectful towards the council,” she said. “We hope it is obvious that our intention is never to foster divisions within the Oberlin community or exacerbate tension between the College and town. … We regret how our actions may have been perceived by some members of the community.”

Relations between protesters and sitting counselors remained strained, however. Councilmember Ronnie Rimbert voiced his displeasure at what he described as unfair threats to those who had voted for the settlement.

“I resent the subsequent threats that not only proposed a referendum on council decisions, but also a recall of councilmembers with whom students disagreed,” he said.

Rimbert continued by questioning whether students protesting the settlement knew about the work and positions held by the councilmembers they were criticizing.

“Where were [students] when we fought to establish an Indigenous People’s Day instead of Columbus Day, or raised the minimum wage for our lowest paid hourly workers?,” Rimbert said. “My point is that I resent being characterized in such a limited fashion by those activists who came to our last meeting and labeled me and others with little knowledge of our work to improve and protect the quality of life in Oberlin.”

Councilmember Kristen Peterson also expressed disappointment with the February meeting’s protests. “I am saddened by the suggestions, either implicitly or explicitly, some by those who don’t know me and some by those who do, that I lack integrity or principles,” Peterson said.

After this week’s vote, as students approached councilmembers to thank them, Councilmember Kelley Singleton also refused to shake hands with College senior Christopher Kennedy, a student who had been leading protest chants a week before, even though Singleton shook other students’ hands.

Although protesters and energy activists took the unanimous vote against the settlement as a victory, councilmembers repeatedly said that they believe the pipeline is inevitable and fully expect tree removal crews from NEXUS within the month.

With NEXUS primed to take control of the contested land, the vote became symbolic. “We had learned that afternoon that they had filed to take possession of the property,” Council President Bryan Burgess said, in The Morning Journal. “It kind of defeats the purpose of having an agreement if they jump the gun on it.”

“There is no doubt in my mind that we have lost our long battle with NEXUS and the Federal Regulatory Commission over the pipeline,” Rimbert said. “The pipeline will go in.”

Peterson echoed Rimbert’s thoughts on the contruction’s inevitability. “However the vote goes tonight, this vote will not stop the pipeline,” she said.

Councilmembers explained at the public hearing before the vote that a major consideration for accepting NEXUS’ offer was the company’s promise to bury the pipeline 10 feet deep, thus allowing the city of Oberlin to construct a new water main three feet deep. The water pipeline would have provided greater access to adequate water pressure in East Oberlin and aid the area’s future urban development.

With the fate of NEXUS resolved, the question of how to facilitate further development in East Oberlin remains.

While protesters appeared to leave Monday’s meeting satisfied with Council’s vote, it is apparent, according to councilmembers, that the city has lost its fight with NEXUS. What remains to be seen is how the community will react when the pipeline actually arrives.