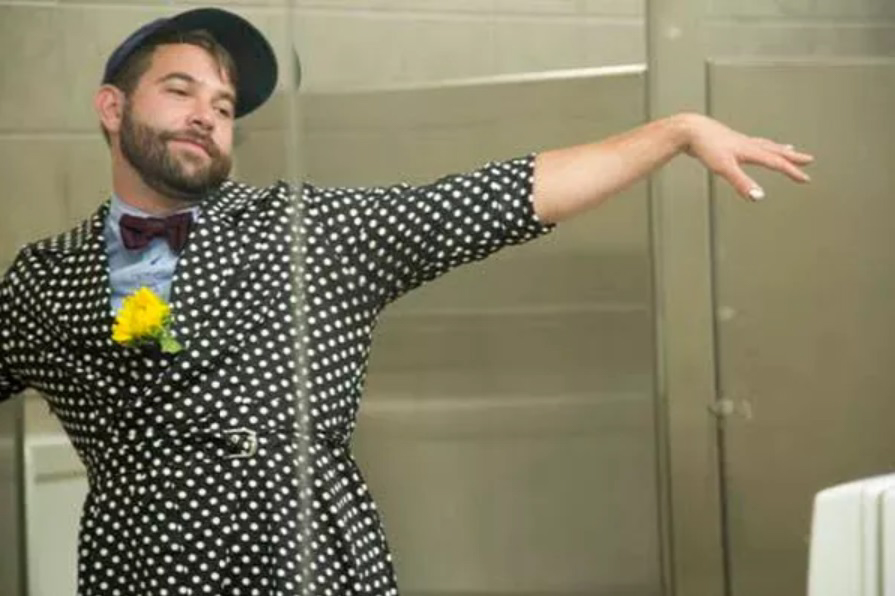 sam sax, OC ’09, is the author of four chapbooks and the 2017 poetry book Madness, winner of the National Poetry Series. He is also the poetry editor at BOAAT Press. sax has received fellowships from the National Endowment for the Arts, the MacDowell Colony, and Lambda Literary. His poems have appeared in The New York Times, Poetry Magazine, Buzzfeed, PANK, Tin House, and more. His latest collection, Bury It, winner of the James Laughlin Award from the Academy of American Poets, is forthcoming from Wesleyan University Press in 2018.

Can you tell me a bit about how and when you first came to writing poetry?

I did a lot of theater. I was a playwright, because my brother was an actor, and I sort of got into that world that way. I also tried out other performance styles. I was in a poetry group in high school, but mostly that was just a way to mess around with friends. It was at Oberlin, where there were these weekly open mics that my friend ran at Agave, I think, so I’d go to those weekly events and sort of have to channel all these multidisciplinary things that I was doing into this one poem form, which ended up being a lot more compelling. I hadn’t planned on it being my life until I graduated, and then I ended up getting in a car with some friends who were on a poetry tour and ended up traveling around the country for a year doing readings. It was at that moment — when I saw how communities are built around literature, and how transformative a poem can be to someone’s internal and external material life — that I decided I wanted to dedicate my life to it, and it became my focus and passion. But it was a slowly evolving act for me.

You just recently published a full-length book, Madness. What has that experience been like for you, having published it, and has that changed anything about your relationship to your writing?

A book is something I’ve wanted for a very long time. For a while [I had] very unrealistic expectations about what a book would do for my life, and then no one would pick up my book for many years. Then I ended up writing a second book, which was Madness, which then got picked up immediately through the National Poetry Series. At that point I had pretty low expectations about publishing, and a pretty dismal understanding about how the publishing industry works for poetry. But since then, it’s been great. The person who picked my book is named Terrance Hayes, and we’ve become friendly through that. I guess I’d been touring well before having a book, but it opens certain doors academically, where I’m doing readings at certain institutions, and opened up certain speaking options that weren’t there beforehand. But I don’t know if it’s changed my writing. I think it’s important for me to write away from the idea of the work being in the world or being published. It’s nice to have a book out there, but it’s still important for me to write many things that won’t be seen.

I think what sort of helped with that process is that being a second book. There’s a lot of pressure on a first book of poems in a way that I think tends to dead someone’s writing process, so I think having it be a longer process or practice of writing, there’s less stifling of it. And my next book is coming out in the fall, so I think being able to immediately hop into another project has also made me feel a little anxious about what this book is doing and the effect it has on my writing life and on the world.

How much does identity inform your poetry in Madness? Can you speak to how that informs your process, especially in these larger collections?

Entirely. I feel like I’m always writing from my particular position in relation to the world, so being hyper-aware of that makes for the most compelling and honest work I can make. Everybody has, obviously, multiple identities, and I think it’s important for me to follow the path that they all lean towards. It’s important for me to write about Judaism and queerness and whiteness and masculinity, and that affects my particular vantage on how I look at history and how I move through the world. All of the historical work that goes into this work is rooted in that as well — being the grandson of a Freudian analyst and negotiating mental illness — it’s all sort of tied in.

You mentioned earlier that you’ve done slam and spoken word. How does the relationship between doing that, and also writing poetry for the page, work for you? Do you find them to be very similar or different?

It sort of happened organically. I came to writing through performance, and through seeing how transformative a poem can be when spoken. And then I started making chapbooks to sell on tour, so the publishing part of it became a necessary outgrowth of the spoken gesture of the poem. And then I turned to the page a little more and saw how poems in space offer voice on page in the same way that moves me about spoken poetry. So I’m thinking about Terrance Hayes’ “Wind in a Box” or “Teahouse of the Almighty” by Patricia Smith or Essex Hemphill’s “Ceremonies” — they’re all books that I read early or that showed me what’s possible on the page. I think some poems work better in the air, some poems work better on the page, but for me it’s more interesting to make work that is able to sing across multiple media — in the ear, in the eye, in the brain, in the mouth. Yeah. I think it also prioritizes the necessary urgency of the spoken gesture.

In line with that concept of urgency, what role do you think poetry is playing or has to play in today’s political climate, and do you think it can remain apolitical? Are there obligations artists have to respond to what’s happening in the world?

I think the political import and impact of poetry is first and foremost representation and empathy. Poetry very much can be alive, and I think that in order to mobilize people or mobilize bodies they have to be alive for it to sink in. I think that’s the primary effect — seeing that your experience in the world is not singular, seeing that your struggles and the immaterial qualities of your life are experienced by other people is one of the most powerful things a poem can do. It can help people feel the lives in and around those conditions. I also think it’s a useful tool for accessing the potential of our world, where you can imagine a better world in the writing. I think there’s some freedom in a poem to speak back … or through to power in ways that are suppressed in other forms. Which is why I think, historically, poets are often the first people assassinated or incarcerated by repressive and fascist governments. I don’t think the work that poetry is doing now is different from what it has been doing historically in various policed and repressed communities in the United States and elsewhere. It continues to serve that similar function.

Well, I think there’s something about performing — an audience can be a really excellent editor. Seeing how the poem lives and works in the air really helps you hear what the poem is doing on the page, and also seeing how it’s going to affect folks, right? Often you write in isolation, and you don’t know what kind of work your poem’s going to do until it does the work. I’ve read a poem before where I’ve seen people wince at moments that I’m not trying to have them wince at, and that’s really telling, you know? Or, they wince at moments where I want them to wince. And that’s affirming for the poem that I’m making. I think having a regular audience is really useful. I don’t have a regular spot I go to anymore, but I think hearing your work aloud can be really helpful.

Do you have obsessions that you write about and can you talk a bit about how they manifest in your work if you do?

Often my body will have a response to the world that I don’t understand, either disgust or pleasure or desire, and I’m like, “Oh, why am I feeling this way?” I think those tend to be the moments that I try and write myself into, whether it’s my feelings around Zionism, or anal pleasure, or these larger embodied and historical topics that root around at me. I use the poem as a way to navigate how I feel and situate myself in and around it. I think generally my writing is invested in desire, and where that comes from, like how identity is constructed and inherited. Mental health and addiction come up a lot; grief tends to be the major circling point. I think also the questions seem to be evolving, thank goodness, so it’s not a singular area of interrogation.