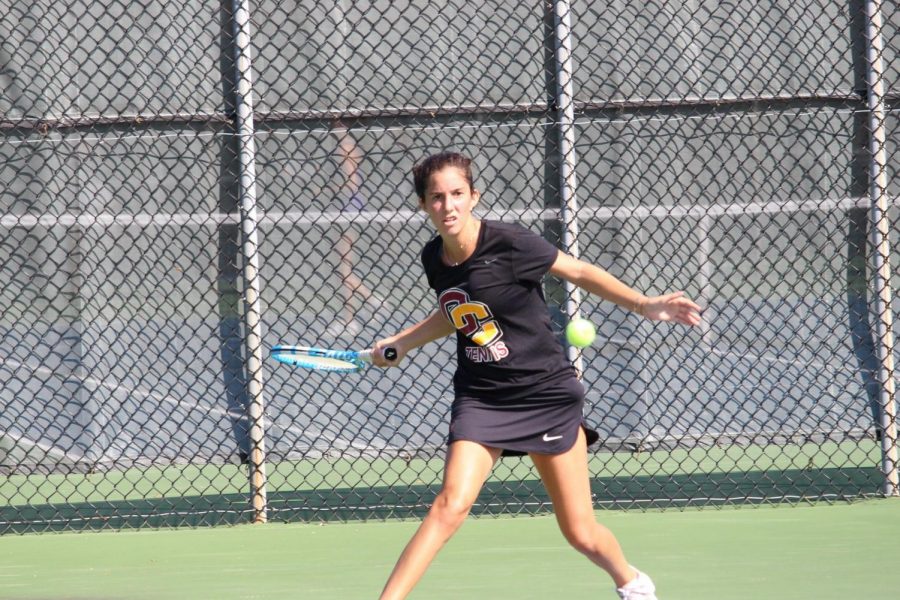 Senior Mayada Audeh warms up for the ITA Central Regionals, hosted by Oberlin in September. Over spring break, the Yeowomen won all three of their matches, giving them a six-game winning streak heading into conference play.

The women’s tennis team doesn’t pay much attention to their record or national ranking, despite boasting an impressive 10–5 record. The plan is the same every year: gain a competitive advantage over North Coast Athletic Conference opponents by scheduling tough opponents before conference play begins.

The Yeowomen collected three hard-earned wins during their spring break trip to Orlando, FL, which should give them a boost of confidence and some momentum as they look to build on their six-match winning streak tomorrow against Division II Tiffin University.

On the first day of competition, the Yeowomen played a little below Head Coach Constantine Ananiadis’ expectations, despite beating Hamilton College 6–3. They had some help from their opposition, as the Continentals forfeited the No. 3 set in doubles play and No. 6 set in singles play.

Ananiadis said he would like for his team to be more consistent, especially when conference play begins April 6.

“We need to play more consistently if we are to challenge for the conference championship,” Ananiadis said. “One day we play good singles, the next good doubles. One day the top of our lineup carries us, the next it’s the bottom that comes through. Our only chance to beat [teams like Kenyon College and Denison University] is if we play good tennis from the start of doubles and to the end of singles.”

The team faced challenging competition against Grinnell College, but used the toughness and experience they gained in the beginning of the season to finesse a victory. After two hours of doubles competition, Oberlin gained a 2–1 advantage. Hughes and sophomore Delaney Black won 8–4 in the top flight, and McDermott and sophomore Rainie Heck won a close matchup at No. 3, 9–8 (7–5).

On the third and final day of competition, the Yeowomen concluded their successful spring break campaign in a 7–2 win against the St. Lawrence University Saints. McDermott highlighted the day as she collected her 100th career victory — a career milestone that Audeh has also reached in her final collegiate season. McDermott said she wasn’t aware that the victory she and Heck earned in doubles play at No. 2 would go down as her 100th until her dad told her.

“My dad signaled to me that that was my 100th, and I was really excited because it’s a nice milestone to hit, but it was really nice to be playing with Rainie when it happened and to have worked through a really tight match with her,” McDermott said.

Hughes and Black needed a tiebreak to win their doubles match 9–8 (7–5). According to Hughes, the cheering and encouragement of her teammates helped the duo persevere.

“I think Delaney and I found that support from our teammates allowed us to pull out the win,” Hughes said. “We were getting unnecessarily nervous throughout the match, especially because of the harsh wind conditions, so it definitely helped to take a step back during the tiebreak, relax, and focus on things we could control, like our movement and attitude.”

For her efforts on the court all week, Hughes was named NCAC Women’s Tennis Player of the Week. She extended her winning streak in singles play to four and in doubles play to five.

Despite the successes Hughes and McDermott earned individually while in Florida, the two are focused on being good teammates.

“Before my collegiate career comes to a close, I hope that as a team we not only compete to our best ability, but that we also keep in perspective what’s most important,” Hughes said. “It is so important towards the end of a long season — and especially when results seem to matter the most — to keep our calm and be grateful for each other and our sport.”

McDermott insists that her personal success wouldn’t be possible without the help of her team.

“All the success I’ve had at Oberlin is only possible because of my teammates,” McDermott said. “The player that I am now is someone who I never would have even imagined I could be before I got here. I definitely attribute that to my teammates pushing me every day and my coaches taking such a special interest in developing me as a player.”

The Yeowomen look to continue their winning ways as the Tiffin University Dragons come to Oberlin tomorrow at 2 p.m.