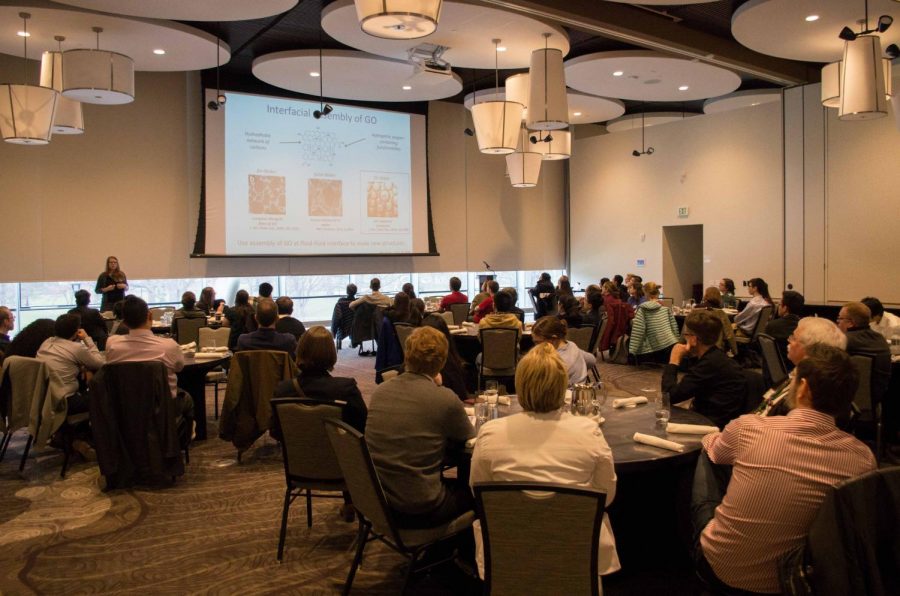 Oberlin Chemistry students presented their research findings for the annual Meeting-In-Miniature Wednesday. This event, both a presentation symposium and networking opportunity, was sponsored by Oberlin’s Department of Chemistry and Biochemistry, and the Cleveland branch of the American Chemical Society. Oberlin, the host of this year’s event, gave seven students the opportunity to feature their work alongside graduate and undergraduate students from local institutions.

College juniors Alyssa Altheimer and Cecilia Wallace were the only students of the seven presenting as a team. The two researched with Associate Professor of Chemistry and Biochemistry Jason Belitsky in his lab, examining melanin, the biological pigments found in skin and hair.

“This is the first time we’re presenting, but I went [to the Meeting-In-Miniature] last year at Cleveland State University,” Altheimer said. This Wednesday was the first time Oberlin has hosted the event since 2012.

“I feel like we’ve both gotten a lot more excited about kind of the wonders of melanin and the interesting sort of background that drives everything we do,” Wallace said. “It’s kind of cool to really, really dive into the specifics of one area instead of just learning the general stuff in class.”

The projects students presented reached across many different fields within chemistry and biochemistry. College senior Arden Hammer presented her research in material science in the same section as students researching organic chemistry. She is optimistic about the mix of different topics the symposium covered.

“All of the cool ideas later discovered are the result of talking to someone at a conference and them suggesting something that made you have a spark,” Hammer said. “Hopefully something like that happens at the Meeting-In-Miniature, especially since there are so many fields in chemistry all coming together.”

“Organizing an event like this I think requires being able to think long-term,” Hua said. “The thing about the symposium is that we only let undergraduate and graduate students in local institutions present, so this is a good experience for a student because you rarely get to do it at a larger platform.”

Aside from encouraging students to share their own work, the Meeting-In-Miniature also invited Emily Pentzer, the Frank Hovorka Assistant Professor of Chemistry at Case Western University, to give the plenary lecture. Pentzer’s lecture touched on the work her lab has done, including the creation of new materials for supercapacitor electrodes and the importance of communication and collaboration.

“Some of our projects have really started with just conversations over coffee,” Pentzer said. “Collaboration can really help kind of get outside of that box of what’s normally done and have more creative and inventive ideas, and ideally those will lead to better performance and properties.”

“I think it’s always helpful to get that sort of outside perspective that maybe will bring something to my attention that I haven’t thought of before,” College senior Mikaila Hoffman said.

Hoffman, a Chemistry major with a concentration in Cognitive Sciences, presented her research on the formation of cocrystals, crystalline substances made of caffeine and malonic acid. Both Hoffman and Hammer’s research served as their senior Honors projects. After graduating Oberlin, Hoffman is looking to continue on to graduate school.

“The sort of exercise of having ownership over a project, being involved in the experimental design of the project and really the heavy lifting of actually doing the research and then also writing it up and presenting on it seemed like a really excellent opportunity to develop those skills going into grad school,” Hoffman said.

“Part of what made me change my mind was realizing how focused research can be and how focused grad school would be, which was appealing to me at certain points, but also in other ways I wanted to do more than just work on a single project and then make a thesis about that,” Walsh said.

Walsh added that she believes that opportunities such as Meeting-In-Miniature help make science more accessible.

“I think science can be really frightening sometimes,” Walsh said. “I think it’s really cool that, with conferences here, friends can come by, or even in previous years, like presenting in Cleveland.”

Having the Meeting-In-Miniature at Oberlin presented an opportunity for local researchers and Oberlin students to learn and collaborate. Hoffman said she believes Oberlin is a good fit for this kind of event.

“If anyone’s wanting to do chemistry but is intimidated by the sort of the reputation that surrounds chemistry, this is a really good place to get past that,” she said. “I think there’s a lot of great people here who are willing to help and really wonderful ways.”

Oberlin, among all of the liberal arts schools in the U.S., has one of the highest rates of students continuing to earn Ph.D.s in STEM fields.