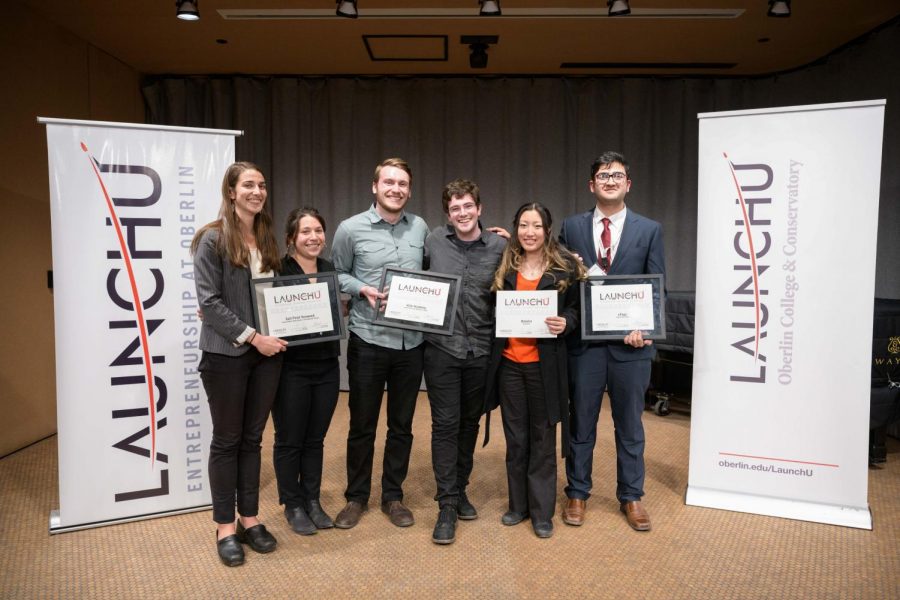 The sixth annual LaunchU program — Oberlin’s startup accelerator, boot camp, and pitch competition — came to a close March 10, as 10 teams of startup companies competed for a pot of $37,000. Three of the four winning businesses were made up of current Oberlin students, while one team consisted of alumi.

The program began with a 12-day, 12-hour “boot camp” of sorts in January that offered a variety of resources and trainings to educate the novice entrepreneurs on key aspects of succeeding in business, such as training on marketing, intellectual property law, branding, finance, business forecasting, how to build and work with a team from a start-up perspective, website building, and more.

Initially, 31 participants were involved in the program with a total of 21 independent ventures. 17 ventures made it to the first pitch competition in February, and 10 advanced to the final round in March. In the end, the first, second, and third place teams received monetary awards, as well as an honorable mention.

This year’s first-place pitch was Salt Point Seaweed, a Bay Area seaweed harvesting company founded by Tessa Emmer, OC ’11, a former Environmental Studies and Economics double major; Catherine O’Hare, OC ’11, a former Biology major; and Avery Resor, who did not attend Oberlin. The fledgling company walked away with $20,000 to help launch their business.

“We only go out to about our knees or our hips and just use scissors and harvest these varieties in a way that they can regenerate — we are really careful to follow ethical harvesting practices,” O’Hare said. “And then we dry it out in the sun, and we have a commercial kitchen where we do a lot of the processing and making our products.”

While their respective studies did not directly translate to entrepreneurship, both Oberlin alums noted the impact that their Oberlin educations had on their current career path and this venture.

“Being a student at Oberlin, the expectation among that community there, and with all our Oberlin community past there too, is that we care about the impact of what we’re doing and trying to do it in a way that thinks about our impact at every level — social and environmental,” Emmer said. “That responsibility carries with you past Oberlin, for sure.”

According to O’Hare, the pair of Oberlin alums got involved with LaunchU in the hopes of obtaining the means to sustainably expand their business, while remaining true to its mission.

“We had been looking for accelerators like [LaunchU] and thinking about it, but we’re such a unique company that it felt like we didn’t fit into the totally normal tech startups that are in the Bay Area. We’re kind of in this funny middle ground,” O’Hare said. “So, when we saw … LaunchU, it felt like a great fit, and I was really excited to come back to Oberlin.”

Bara Watts, the director of LaunchU, called the businesses to come out of the program this year “uniquely Oberlin,” noting how an Oberlin education situates people to come up with creative, socially conscious ideas.

“Because we’re a school without a business school program, our students and alumni come in with a mindset more focused on a broader set of issues,” Watts said. “They start from where the issues are and what the problems are and work backwards for where to deal with it — the business aspects, which is actually a very exciting and a very different way of pursuing start-up businesses. And because of that, I think we have some really interesting companies and products that have come out of it.”

Emmer discussed how this type of incubator program can help unseasoned startups, particularly when the contestants don’t have a business background.

“I think that regardless of where you are in your business, the frameworks that you work with in this type of incubator program in terms of understanding who your potential customer is, how to put together a business plan, how to put together your financial projections, what it means to actually be sustainable financially — having the tools to think through that that is huge,” Emmer said. “Those tools stay with you, and then you know some of the questions you have to ask yourself early on, which aren’t necessarily intuitive.”

Salt Point Seaweed plans to use the money to create a seaweed farm on land, rather than manually retrieving it from the ocean.

This will allow them to increase the amount of seaweed they are able to produce, as well as reduce the amount they are taking from the ocean so as to promote more sustainable practices.

The second place prize of $10,000 was awarded to College seniors Bryan Rubin and Benjamin Steger for their startup Virtu.Academy, an online music lessons service that connects Oberlin Conservatory students to middle and high school students across the state of Ohio. The website is currently in the pilot stages, but has already hosted a few lessons, and is welcoming its first paying customer later this week.

“You can scroll through a list of teachers, and all teachers you know are going to be really good quality from Oberlin, Julliard, whatever — and then a student can book a lesson with them, their calendar is synced up with the site, so you just click a time they’re free and both people click the link to the room and you’re in a video-chat with a teacher,” Steger said.

The pair hopes to expand the company to access different teachers from prestigious conservatories across the country, as well as low-income students, those in remote areas, or those who for other reasons do not have easy access to musical education.

“A big part of the whole idea is also to make it more accessible, so being able to teach free lessons to underserved communities, and starting already, a bunch of teachers have volunteered — or said they would volunteer — their time to teach lessons for free, so it’s a good thing for both students and teachers,” Rubin said.

The money they received from LaunchU will help the pair develop their platform more quickly, and enable them to start implementing features of the streaming service that are more unique to the services of Virtu.Academy.

While the company is still in its early stages, it has already received a lot of positive feedback.

“The one thing that really hit us — we started the pilot program and we just called a few random band directors in Ohio, and the first person that responded said that this is an opportunity that he’s been wanting for his students because his school is over two hours away from any music teacher,” Steger said. “The band director was really frustrated because none of his students were taking private lessons, so he became really excited about this idea and he’s been sending us a bunch of students and all the teachers from Oberlin have been teaching them.”

College senior Hassan Bin Fahim secured third-place, receiving $5,000 for his website creation platform, UPage, which aims to empower people in developing economies where the internet is relatively new, so that they will be able to build a website for themselves easily and affordably.

The program is still in the developing stage, but Bin Fahim projects that the final product will be a platform that is simple, local, and affordable so that users may be more inclined to complete their projects and utilize them for a variety of purposes.

Bin Fahim has high hopes for the venture, partially based on what he has learned through LaunchU, which is the program that initially brought him to Oberlin.

“I ended up coming to Oberlin because of LaunchU,” he said. “I’ve been involved with LaunchU since my freshman year. I participated my first year with a similar version of my current company — just an earlier version of the idea — but I was a freshman at that time, and all the feedback was, ‘focus more on your company, think about your Oberlin experience, try to get more experience, and then try to pursue this full-time.’ For my sophomore and junior years, I was interning with the program and helping run it, and my senior year I participated again.”

Bin Fahim plans to continue to develop uPage full-time once he graduates from Oberlin.

“The money from LaunchU is really helpful because it allows me to hire people and start the development process,” he said. “I’m hoping to raise more money and then be able to pursue this full-time after I graduate.”

College first-year Katie Kim received an honorable mention and $2,000 for Bobalin, a boba stand she sets up in Tappan Square on Sundays, which she hopes will eventually become a college-operated service for students.

“My number one goal is just to have boba on campus,” Kim said. “I never expected any of this LaunchU stuff to happen, but it was an incredible experience and one that I’ll definitely take past Oberlin and past Bobalin — and it looks like I’m establishing that. I’m working with my mentor, Bara Watts, and she’s been really helpful in talking with people in the administration.”

Although Bobalin’s future is up in the air right now, Kim is hoping to partner with the College to get the service into a dining hall or Azariah’s.

“Right now, it’s a matter of interest and the College being interested in this idea, but I’ve gotten some support from members of the administration about having it in Azariah’s, and that would be a huge step in my goal — where I could have it made in a food-safe kitchen, and have regular hours and students would regularly go there,” she said.

Though the LaunchU competition is over, the Creativity and Leadership program still has a number of funding opportunities for students interested in funding a project, interning over the summer, or launching a venture.