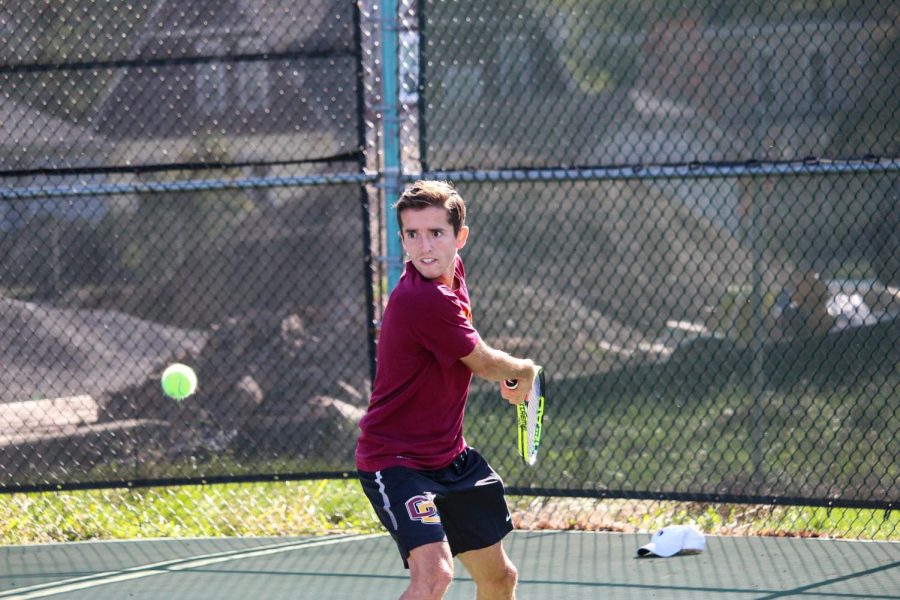 Four seniors who helped the men’s tennis team rise to become a formidable force in both the North Coast Athletic Conference and the region celebrated their Senior Day Saturday against the Ohio Wesleyan University Battling Bishops, winning 8–1. Following the Senior Day ceremonies, as the Yeomen hoisted “fatheads” of their senior leaders, they convincingly swept doubles and eventually earned their second conference win, improving their overall record to 7–7.

As parents, grandparents, and friends looked on from the bleachers next to court one inside Philips gym, Oberlin honored Michael Drougas, Manickam Manickam, Robert Gittings, and Levi Kimmel.

Drougas has had a particularly storied career with the Yeomen, consistently playing in the top of the lineup and winning 65 percent of his collegiate matches to bring his wins total well over 100.

“Playing tennis at Oberlin has been a tremendous honor and joy,” Drougas said. “Four years of collegiate tennis has required significant determination and hard work, so Senior Day was a nice day to celebrate the achievements of all of our seniors. Having my family at the match made the day even more special and meaningful.”

Drougas added that his other senior teammates felt the same way.

“The senior class and our families have become close over the past four years, and so it was very special to have everyone together for Senior Day,” he said.

The seniors played together on court, with Drougas teaming up with Manickam in the number two doubles spot and Gittings and Kimmel working together at number three.

Manickam and Drougas got off to a bit of a shaky start, which Drougas attributed to Senior Day jitters. But after being down a break early in the match, the senior pairing eventually fought back to close out the Battling Bishops 8–5.

“I was nervous at the beginning because I really wanted to win the match for our team and for Manickam,” Drougas said. “Once we settled down, we began to play better. Winning is fun to begin with, but it is even better when you win with your best friend, so it was a special victory.”

Close friendship also aided the doubles chemistry of Gittings and Kimmel, who bested Ohio Wesleyan in a convincing 8–3 win in the number three spot. Kimmel, who kept up the volume throughout the match, has become known as a driving force of the team’s lively presence since he transferred to Oberlin in his sophomore year.

“Levi has been a great addition,” Head Coach Eric Ishida said. “He has a great positive energy. He is always working hard, having fun, and being intense all at the same time.”

Ishida said that Gittings shares a similar intensity, but with a more calm demeanor. Gittings has been a mainstay of this season’s doubles lineup and a consistent starter in singles, and Ishida noted that he continues to work to improve.

“Robert has a very diligent work ethic and is always toying with his game to get the most out of it,” Ishida said.

Gittings and his classmates have helped the tennis program do a complete turnaround. As recently as six years ago, the Yeomen finished in 8th place in the NCAC and struggled to compete with regional powerhouses. Over the last four years, they have slowly climbed the regional rankings and finished third in the conference last season. Oberlin currently holds a national ranking of 39.

“This group in particular really pushed us to the next level,” Ishida said. “They helped change how we go about practice and how we do things every day, which eventually, over time, has really increased our level of play and rating within the conference.”

Manickam attributed the team’s success to the friendship they share.

“The four of us are really close,” Manickam said. “I feel very lucky to have Michael, Robert, and Levi as teammates and classmates. On court we bring very different talents, but I think that’s what makes us so unique.”

The team’s sophomores have also played a role throughout the season in propelling the seniors’ efforts. At number one doubles, the sophomore duo of Camron Cohen and Stephen Grupposo holds at a 8–2 record. Cohen’s height and slamming put-away volleys, paired with Grupposo’s imposing serve, have propelled the pairing to win seven of its last 10 doubles matches.

Cohen also seems to be in the midst of a breakout year in singles and holds a winning record in the number five spot. Another sophomore who has upped his game is Zachary Vaughn. Playing primarily in the middle of the lineup, Vaughn earned a 7–2 record at the number three spot. Ishida praised both sophomores for stepping up to fill important roles on the team.

“Camron has really put the time in and shown the dedication to improve,” Ishida said. “He’s been a pleasant surprise for us at five singles. Zach, moving up to three, is just a fantastic singles player, and he’s bringing a lot of easy wins to the team which brings everyone around him a lot of confidence. ”

The Yeomen recently returned from their spring break trip to Orlando where they finished 2–1, beating Division III foes Hamilton College Continentals and Grinnell College Pioneers but falling to the Division II Washburn University Ichabods. With four matches remaining in the regular season, the Yeomen will travel to Wooster, Ohio, tomorrow to take on the College of Wooster Fighting Scots. While preparing for the NCAC Championships, which will be played at a neutral site in Indianapolis, IN, April 27– 29, Ishida said he hopes his team will focus both on presence and physicality.

“We want to focus on Oberlin as much as possible, improving ourselves every day,” he said. “We’ve had a lot of talks about our footwork and preparation. We feel like that’s one thing we can control that gives us an edge against conference teams, in big- time matches.”