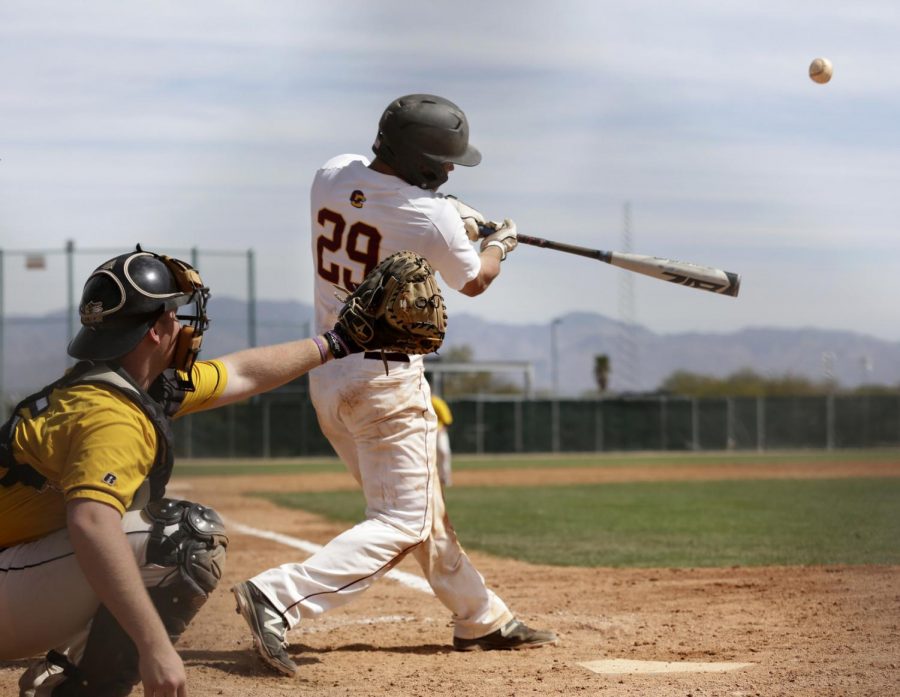 After losing their first five conference games of the season, the Oberlin baseball team earned a 6–1 victory in the second half of their doubleheader against the DePauw University Tigers Saturday. Although the team currently holds an 8–16 record, the Yeomen are confident in their chances of making it to the North Coast Athletic Conference Tournament for the fourth time in six years.

In the first game of the twin bill, junior starter Zach Steer kept his team in the game by giving up four hits, two walks, and three runs while fanning five batters in 5.1 innings of work. However, the Yeomen offense wasn’t able to give Steer any support, managing just four hits off of DePauw ace Grant Rademacher. Juniors Jack McGowan and Ian Dinsmore and sophomores Amari Newman and Max McGee earned a hit each. The sole Oberlin run came in the ninth inning, when Newman ripped a double to right center, scoring sophomore pinch runner Jack Derwin.

In the nightcap, the offense came alive as seven different Yeomen accounted for hits. Junior Brendan Mapes and senior Sam Harris — who missed the first four conference games due to injury — each went two-for-four.

McGee, the second hitter on the lineup card, earned a walk in the first inning and was moved into scoring position after Mapes singled into right field. McGee then advanced to third when senior Quin Butler hit a grounder back to the pitcher, who threw Mapes out at second base. McGee was able to score when Butler got himself into a rundown between first base and second base during the next at-bat.

Nobody crossed the plate again until the sixth inning, when the Tigers scored one run on three hits. However, that run was insignificant when the Yeomen offense responded in the ninth inning by scoring five runs. Mapes hit an infield single, Butler walked, and senior Milo Sklar smoked a single into left field to score Mapes. Newman then hit a two-RBI single to center field and advanced to second on a throwing error. The Yeomen added two insurance runs when Harris singled to right field.

Despite their slow start, the Yeomen have plenty to be happy about, and hope their first NCAC victory will give them some momentum going into the second half of their season.

A big piece of the puzzle is hitting. So far this spring, the Yeomen have collectively hit .252, which is significantly lower than last year’s team batting average of .313. The team knew that replacing sluggers Justin Cruz and Brian Carney — both OC ’17 — would be nearly impossible, but luckily two players have stepped up while some of the Yeomen’s big hitters from last year are still trying to get hot.

Sklar spent his first two years at Oberlin as a member of the bullpen. As a first-year, Sklar appeared in a team-high 19 games and collected a team-high 35 strikeouts, playing a huge role in Oberlin’s first-ever championship finish in the NCAC Tournament. As a sophomore, Sklar led the Oberlin pitching staff in appearances again with 15 and recorded the second-lowest ERA in the NCAC at 2.63. In those two years, Sklar went up to the plate once.

Sklar turned himself into a utility player for the Yeomen as a junior, breaking the program’s single-season saves record with seven saves and gathering 30 hits in 93 at-bats, resulting in a .323 batting average. This year, Sklar leads the team in several offensive categories, hitting .366 with a .563 slugging percentage, 14 runs scored, 26 hits, 18 RBIs, two triples, and two home runs.

Like Sklar, McGowan was a bullpen pitcher during his first two years on the team before heading to the outfield, where he played in high school. McGowan currently boasts the team’s second-best batting average at .346. However, McGowan credits his teammates and hitting coach for his success.

“It was a slow curve at first when it came to getting used to facing college pitching,” McGowan said. “I owe a lot of my success to working with [Assistant] Coach [Brandon] Jossey, Brendan Mapes, and Quin Butler for countless hours over this off-season in order to catch up to where I needed to be.”

In an overall athleticism competition the team held in the offseason, Sklar and McGowan both finished in the top nine.

“We are lucky that Milo and Jack are two of our most athletic players,” Jossey said. “I personally think it’s a good reminder of how important athleticism is in any sport. Those two have put so much time in in the weight room in their careers, and you can see it paying off now.”

Harris, the team’s starting shortstop, and Mapes — who starts every game behind the dish — are heating up. Harris has continually put pressure on opposing defenses, leading the team with 13 walks and 11 stolen bases. Mapes — who was an All-NCAC First Team selection and ABCA All-Region Second Team selection after a sophomore season in which he hit .403 — has hit the ball hard all spring. However, baseball is an unforgiving game, and Mapes’ batting average does not reflect the type of contact he has been making. Even so, Mapes leads the team with a .350 batting clip in conference play.

Defensively, the Yeomen are statistically similar to the team they were last year. In 2017, the team held a .948 fielding percentage, just .002 percent higher than the team’s fielding percentage this year. The pitching staff last year boasted a 5.46 ERA, while opposing pitchers held a 5.42 ERA against them. This year, the pitching staff has a 7.39 ERA, while opposing pitchers have a 3.72 ERA against the Yeomen offense.

Oberlin’s rotation has been solid up to this point. Steer, who was named NCAC Pitcher of the Week two weeks ago, leads the team with a 4.02 ERA. Gear has yet to lose a game in his four starts, boasting a 3–0 record. Senior Sean Kiley — who was an All-NCAC Second Team selection last year after posting a team-low 3.67 ERA — is beginning to play like himself, as he leads the pitching staff in strikeouts with 41. Sklar, who has started two games and appeared in seven, follows Kiley in this category with 23 strikeouts. In conference play, Sklar has been brilliant through six innings, giving up just three hits and no runs. Juniors Steve Kellner and Alex Amorello have been key members of the bullpen this year, combining for 23 appearances.

“Those guys make my job fun,” Mapes said. “They are all super competitive guys, and that’s fun to work with. Each one totally understands their strengths as a pitcher and knows how to use it to find success against any hitter we see.”

The Yeomen expect to kick it into gear moving forward. Last year, the team had a slow start in conference play but got wins when it needed to.

“We need to get back to our identity as a team — win games with aggressive hitting and smart baseball and capitalize on mistakes when the opportunities arise,” McGowan said. “It’s do or die at this point in terms of achieving our goal for the reason: making it to and winning in Chillocothe, [Ohio] at the NCAC Tournament. I have a whole lot of faith that guys will step up when they need to and get the job done.”

Jossey said that the Yeomen will start getting big wins if they begin competing for their teammates.

“Everyone needs to do their job for the betterment of the team,” Jossey said. “If we get a lot of guys showing up every day with a selfless mentality, I believe we will be very happy when we look back at the final stretch of the season.”

The Yeomen look to begin a winning streak tonight as they take on the Wittenberg University Tigers in Springfield, Ohio. The first pitch is scheduled for 5 p.m.