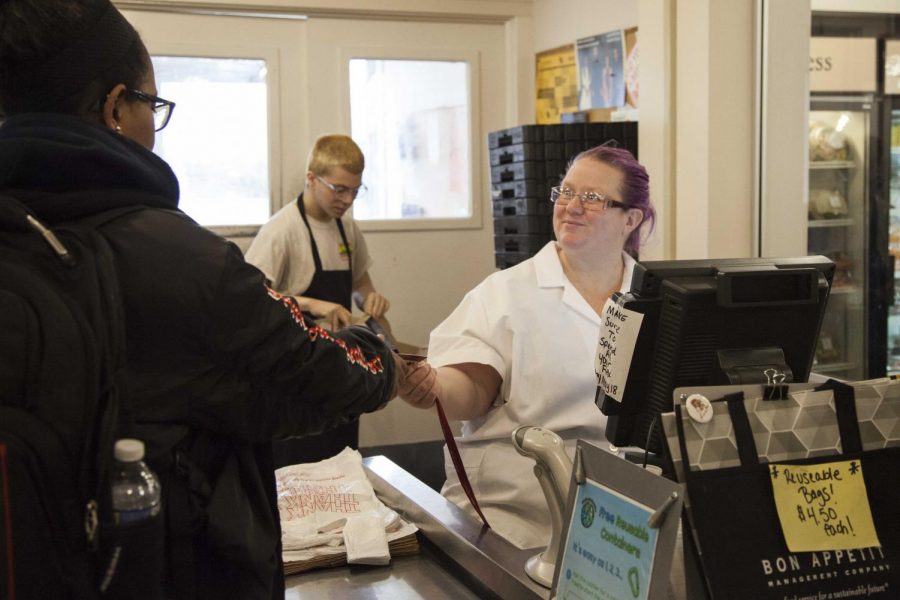 DeCafé employee Allison Trimble hands back a student’s ID after swiping at the cash register. Five CDS UAW employees will be let go at the end of the semester due to Dascomb Dining Hall’s closure and other changes in CDS.

Campus dining staff first learned of Dascomb Dining Hall’s impending closure at President Carmen Ambar’s respective financial presentation. Currently, 19 members of the United Auto Workers — the union that represents Campus Dining Services, custodial, and facilities staff — work in Dascomb, in addition to between 50 and 75 non-union, non-student workers. Although workers had expressed anxiety over what Dascomb’s closure would mean for their job security, it wasn’t until a week ago that UAW representatives learned that the administration would eliminate 13 union positions.

Vice President and Dean of Students Meredith Raimondo met with UAW Chair Milton Wyman; Grill, Cashier, and Cook Denise Capers; Dascomb Chef Jake Reed; and Bon Appétit managers to address CDS workers’ concerns about their future at the College last Wednesday. During the meeting, UAW representatives discovered that 13 of the 19 union positions would be cut, prompting Capers to voice her disappointment that the UAW was not consulted before the administration decided to close the dining hall.

Wyman said that of the 13 positions, five are already vacant, so the UAW will not fill them before the year ends. He added that this leaves eight currently-occupied positions at stake. Although Wyman said that the UAW — which has 175 campus-wide and 75 CDS members — can move three of the unionized Dascomb staff into custodial positions, five unionized workers will still lose their jobs. The positions in jeopardy do not count student or temporary workers; Wyman said that he and the administration are not certain how many of those respective positions will be cut.

Raimondo added that as the administration finalizes fall CDS work schedules, remaining positions will be prioritized for UAW members with seniority. She added that position cuts are an inevitable piece of keeping the cost of dining plans down with coming CDS changes.

“I continue to hear Oberlin students critique the cost of College dining plans,” Raimondo wrote in an email to the Review. “The two major costs in dining are food and labor. Oberlin CDS workers, many of whom have had long careers devoted to student welfare, receive good wages and benefits — one of the important accomplishments of labor unions on behalf of workers. Colleges where most or all of the dining employees are part-time, minimum-wage workers who receive no benefits can offer considerably less expensive meal plans.”

Wyman said that in a meeting with Raimondo, he learned that there are also plans to have the Azariah’s Café and science cart entirely operate by student employees next year. The cart is typically ran by one UAW worker, two temporary workers, and a few students. Wyman added that as he continues negotiations with Raimondo, he will try to maintain at lease one the UAW position at Azariah’s and cart each.

GCC Matt Kubach said that when he started working for the College six years ago, Stevenson served up to 1,100 students during any one mealtime, and that that number has dropped significantly in recent years — sometimes dipping to 400 students. He added that this is because DeCafé started accepting board meals, to which DeCafé worker Allison Trimble attributed to a 40 percent increase in DeCafé attendance compared to last year.

Kubach noted that despite attendance changes at Stevenson Dining Hall, the staffing has largely remained the same — adding that as dining becomes more hectic at Stevenson because of Dascomb’s closure, work conditions at Stevenson will likely become more demanding.

“What I fear is that they’re not really going to feel a need to bring more people over specifically for the meals,” Kubach said in regards to the prospect of a potential increased workload. “But if there are certain changes, like adding sandwiches or grab-and-gos or stuff like that, maybe they can put a body or two there.”

Dining offerings and services will also change next year. DeCafé and Stevenson will offer breakfast, and Wyman and Kubach said that the build-your-own deli bar in DeCafé will close to expedite wait times. According to Raimondo, CDS is instead expanding the grab-and-go options in Stevenson and other lunch options for South campus, facilitating these changes by using the bakery space in South Hall basement for grab-and-go preparation. Wyman said this move will maintain four GCC positions.

“I don’t necessarily agree with some of the offerings because I think they’re not of the highest quality,” Kubach said. “That stuff bothers me, because that’s my face on that, and it’s not my idea. And the kids are looking at you, like, ‘Well this roasted vegetable wrap is soggy,’ and you’re like, ‘Well, that’s what we’re told to do — make a roasted vegetable wrap and make 500 of them and throw them in a hot box and keep them warm.’ Of course they’re going to get soggy; it’s awful.”

Wyman echoed Kubach’s concerns, adding that they further highlight many critiques that CDS workers have of Bon Appétit, the campus dining company which the College uses.

Many CDS workers have said that they would like for the College to stop hiring Bon Appétit, arguing that the dining company overbuys food, manages poorly, and does not allow for CDS workers’ input to improve food. GCC Adam Karloc said that Bon Appétit gets its recipes from Allrecipes.com and that the turnover rate of Bon Appétit managers at the College is high — adding that last year, Stevenson cycled through seven different managers.

According to Raimondo, Campus Dining suggested the College maintain its relationship with Bon Appétit after it reviewed CDS last semester.

“[Bon Appétit] are experts in providing educational dining services and have supported a range of College values, including attention to sustainability and local foods,” Raimondo wrote in an email to the Review. “They work closely with College administrators in Student Life and Finance and Administration. … Oberlin and other colleges that contract for dining management and services choose this option because such arrangements yield higher quality and more economical results than self-operated dining.”

Wyman said that he, UAW representatives, and Raimondo will continue to meet in the coming weeks to further determine and negotiate agreements to best protect UAW members as the College crystallizes its dining plans.