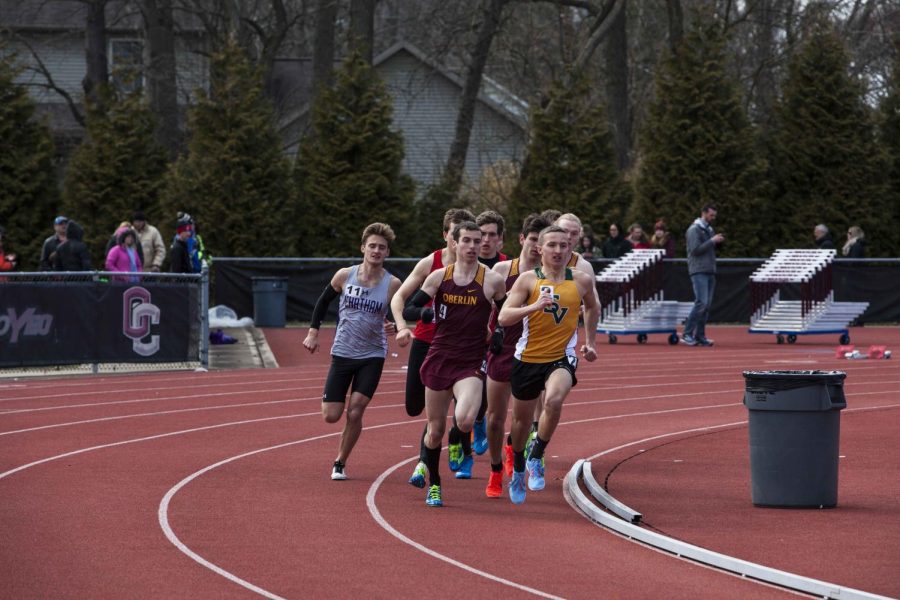 Distance runner Owen Mittenthal, who has enjoyed a successful senior season thus far. In the All-Ohio Championships Saturday, Mittenthal earned his team a point in the 1,500-meter, finishing the race at 4:07.00.

Under Head Coach Ray Appenheimer, Oberlin’s track and field athletes have consistently broken school records and earned personal bests by avoiding complacency and encouraging each other to be the best possible athletes, teammates, and leaders every single meet.

On Saturday, the No. 12 Yeowomen continued their dominance by placing first at the All-Ohio Championships with a grand total of 124 points. Seniors Lilah Drafts-Johnson and Monique Newton highlighted the day, combining for 48 team points. Their efforts earned them North Coast Athletic Conference honors for the week.

Newton also had one of her best performances to date, tossing the discuss 154-05.00 feet and the shot-put 47-05.25 feet. Those marks are first and second in the country, respectively.

Sophomore Jasmine Keegan had a solid day in the throwing events, taking fourth in both the discus (136-08.00) and shot-put (39-04.50). In the hammer throw, senior Ana Richardson placed first with a toss of 168-00 feet, which is sixth in the nation and just four feet and six inches short of the school record mark.

Sophomore Grace Finney, who was the NCAC Field Athlete of the Week after her performance at the Bob Kahn Invitational, earned a top-three finish in the pole vault, clearing 11-08.50 feet. Last weekend, Finney set the school record as she cleared 12-00.00 feet. That mark leads the conference and is 13th in the nation. If Finney can clear a similar mark at the NCAC Championships in two weeks, she should advance to nationals for the first time in her career.

“Right now I am trying to focus on staying consistent, keeping my form in meets, and moving onto bigger poles so that I can go for higher heights,” Finney said. “Conference is a good, competitive meet with a lot of positive energy from the whole team, so I know the most important thing will be to show up ready to compete and execute my technique.”

Sophomore standout Shannon Wargo, who competed at nationals last spring, came in third in the 1,500-meter race with a time of 4:41.70, a season-best.

The men’s team finished 15th overall with 20 points, but a handful of athletes had season-best performances. Junior Grant Sheely has his sights on a conference championship in the 3,000-meter steeplechase and a chance to compete at nationals. On Saturday, Sheely proved he is up for the challenge by finishing the event in 9:13.77 seconds, a first-place time that is just 1.46 seconds slower than the school record. Sheely’s time is currently the sixth-best in the country.

“I am super excited about my position right now and am really looking forward to improving it,” Sheely said. “I am not satisfied yet. I am going to keep working and keep fighting to cut seconds off my times. I look forward to racing again and am very aware of how few races I have left to accomplish my goals.”

In the hammer throw, junior Hank Sinn earned five points with a fourth-place toss of 166-11.00 feet. Junior Jahkeem Wheatley came in fifth place in the pole vault with a season-best leap of 14- 00.75.

Appenheimer said that the way his athletes build off of each other’s successes represents the way Oberlin functions as an institution.

“Oberlin is an aspirational place,” Appenheimer said. “The people who come here do so to work toward the best versions of themselves. That’s one of the things that makes Oberlin so special. Being surrounded by aspirational people, wanting to be challenged and to challenge everyone around you seems like it’s woven into the tapestry of this place. Our team is just one example of this on campus. Monique and Lilah feed off Grace and Grant’s hard work and achievements, and vice-versa. We’re lucky enough to have 85 student-athletes there every day who are committed to this and to one another.”

Sheely agreed that watching his teammates succeed is what drives him, but ultimately credited his coaching staff.

“Watching our amazing athletes like Shannon Wargo win a mile or Lilah Drafts-Johnson win a 400m hurdles, or even Jahkeem Wheatley win a pole vault gets me so amped up and makes me want to achieve what they just did,” Sheely said. “But I would be nowhere without Coach Ray who reins me in and makes me practice patience. He never lets me off the hook, keeps me focused, and keeps me running smart.”

Track and field looks to continue breaking records and gaining recognition in the conference and the nation as they compete in the Kenyon College Spring Invitational tomorrow.