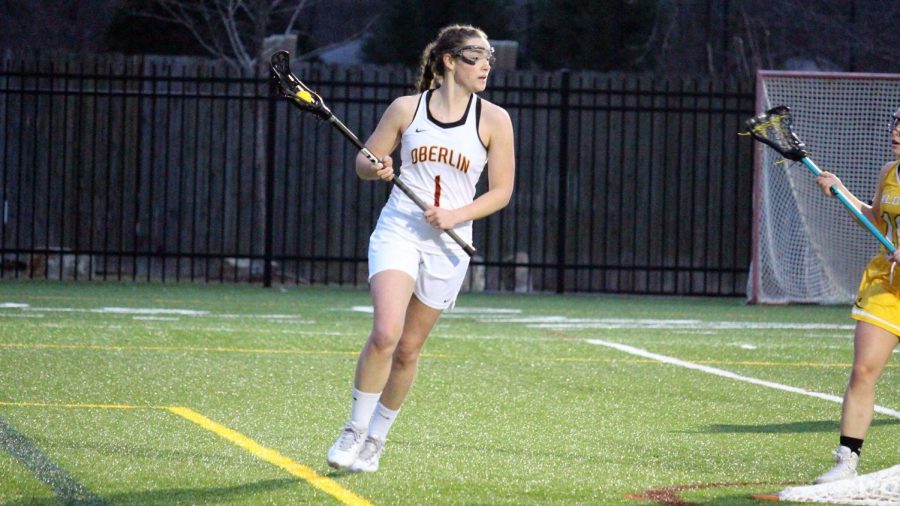 The women’s lacrosse team defeated the Ohio Wesleyan University Battling Bishops 16–4 Tuesday, bringing them to 9–3 for the season and a perfect 5–0 in North Coast Athletic Conference play. The win followed a 20–3 victory against the DePauw University Tigers last Saturday, as the Yeowomen currently sit at number two in the conference.

Head Coach Lynda McCandlish affirmed that the Yeowomen have taken this season game-by-game in their pursuit of a conference championship.

“I think the goal of every year is to improve every game, every day, and every practice. I think our team has done a good job of that,” McCandlish said. “After games that we feel like we could’ve played better, we’ve put in the work and went back to the drawing board to see where we could’ve done better.”

Against the Battling Bishops, the Yeowomen jumped to a 3–0 lead within the first seven minutes, including a goal from senior midfielder Natalie Rauchle. Rauchle has been a focal point of the Yeowomen offense since joining the team. Currently, she leads the NCAC in goals (63) and points (76), and is making a strong case to repeat as an Intercollegiate Women’s Lacrosse Coaches’ Association Great Lakes All-Region First Team select. She tacked on another four goals before the halftime break, giving the Yeowomen a 7–3 lead.

In light of scoring her 200th career point in the Yeowomen’s April 7 game against the College of Wooster Fighting Scots, Rauchle had her team to thank for her career accomplishment.

“It makes it really special that I was able to share it with the women on the team right now,” she said. “They’re definitely a huge part of how I was able to get to where I am now, and it’s definitely representative of the program we’ve built.”

After the first half, the Yeowomen’s defense stifled the Battling Bishops, holding them to just one goal over 25 minutes while scoring nine more of their own. Also contributing to the scoring barrage were senior midfielder Sydney Garvis and sophomore midfielder Eliza Amber, who netted two of their own. Garvis, who co-captains the team with Rauchle, won NCAC Player of the Week for her efforts against the Tigers and the team’s 20–14 win over the Alleghney College Gators.

“I was really proud to be named NCAC player of the week,” she said. “It’s the first time I’ve earned the honor, and I was really excited when I found out. I feel like a lot of the work I’ve been putting in has paid off in really great team wins like against Allegheny and DePauw. There is no way I could have done this without my co-captain Natalie Rauchle on the draw and our entire team working really hard.”

Garvis’s nine combined goals against the Gators and Tigers have been demonstrative of the Yeowomen’s dominance over conference teams this season. Outside of Rauchle’s superstar performance, the Yeowomen have seen outstanding seasons from Garvis, Amber, and first-year midfielder Leah Crowther on their way to a perfect 5–0 conference record. However, just like last season when they started the year on an eight-game winning streak and reached the postseason 13–1, it won’t mean anything if they can’t overcome the Denison University Tigers, who beat them in the championships last year.

“One of the challenges we faced in the championship last year was the time it took to adapt to their defense,” Garvis said. “We got down early and couldn’t come back. Since then, this season, we’ve worked hard to learn quickly and make changes as an offensive unit to adapt to whatever we team we face. By the time we play Denison on [April 28], we’ll be prepared.”

Denison is still a long way off, as the Yeowomen first have to prepare for tomorrow’s matchup against rival Kenyon College Ladies on Bailey Field at 1 p.m. After that, they have another game against the Hiram University Terriers before playing the Tigers the last weekend of April.

“The mentality of this season is the same as it is every year,” McCandlish said. “We want to win a conference championship. In the past we’ve been close, but we just take it every year and every game, and right now we’re focused on our Kenyon game tomorrow. Then we’ll take it game by game after that.”