NLRB Sides With OCOPE in Suit Against College 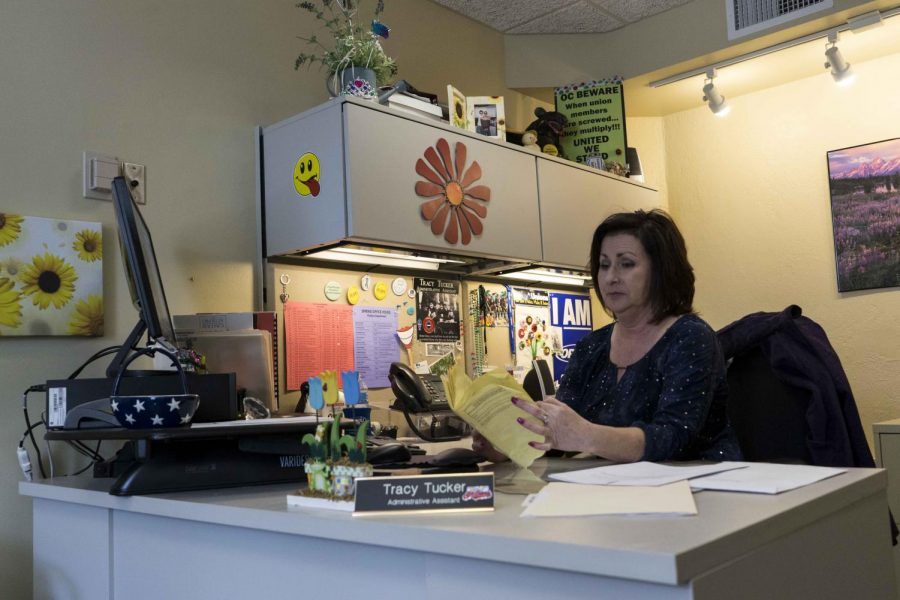 Tracy Tucker, the Oberlin College Office and Professional Employees Union President, reviews the mutual bargaining agreement signed by both the College and OCOPE. OCOPE recently won a settlement against the College for violating the contract.

The Oberlin College Office and Professional Employees union recently won a suit against the College with the National Labor Relations Board. The charges, filed in January, claimed that the College violated their mutually agreed-upon collective bargaining agreement by placing temporary workers, who make $14 an hour and receive no employment benefits or insurance, in OCOPE positions longer than is stipulated in the contract. The NLRB found the College in violation of the contract during arbitration.

This is the third time in four years that an OCOPE grievance has reached the level of arbitration — the most extreme step in a four-part process meant to resolve discrepancies related to the contract, which is negotiated by OCOPE and the College’s Human Resources department and was recently updated in 2016.

“We haven’t had to grieve these situations for quite a while because human resources effectively managed the hiring process,” said Diane Lee, OCOPE vice president and interlibrary loan specialist. “The College has stopped settling these grievances and forced us into arbitration, which costs us tens of thousands of dollars — particularly for the College.

Lee added that forcing unions to take so many issues to arbitration is a common union-busting tactic, since it forces the union to expend valuable resources on the grievances.

“It wastes an incredible amount of time because both sides have to prepare, there is all kinds of documentation needed,” she said. “We’re wasting time we could be delegating to our jobs and helping students and faculty, … but we have to be taken from that to defend our contract.”

Since the NLRB ruled with OCOPE, the College must both fix the discrepancies and post an NLRB statement around campus indicating the College’s failure to adhere to the union contract, which must be left posted for 60 days.

“They are causing the College to pay out in arbitration, not only financially but morally,” OCOPE President and Politics Department Administrative Assistant Tracy Tucker said. “I mean, the embarrassment of having to post this NLRB charge — that’s more of a black eye to the College than anything — it’s the humiliation point of it.”

Before this, OCOPE won a similar settlement for a grievance they filed in Februay 2017. The grievance came after the Voluntary Separation Incentives package — the faculty and staff buyout initiated in April 2016 that was meant to save the College money. 32 OCOPE members participated in the VSIP, and many of the vacated positions were not filled, which led to much of the work being distributed among non-union students, faculty, and other staff members — a direct violation of the bargaining agreement.

“The part that really resonates with me is the money that’s wasted,” Lee said. “Because the College has lost in all three of these major actions, and I don’t think there is a single person in HR that didn’t expect that to happen. It’s not new language, it’s not new interpretations — it’s things we have agreed on for years.”

President Carmen Ambar maintains that despite the NLRB’s accusations, the College admits to no wrongdoing.

“While we disagree with the factual allegations set forth in the National Labor Relations Board’s complaint, we continue to agree with the principle that sharing information with union leadership about the terms, conditions, and benefits of employment for its members in a timely manner is important,” Ambar said. “We also find affirmation by the NLRB’s settlement statement that notes nothing in the settlement agreement should be construed as an admission by the College that it unlawfully refused to furnish information to the OCOPE or that the College violated the National Labor Relations Act in any respect.”

For some students active in the field of labor justice, the settlement was a welcome victory.

“My greatest hope is that this victory can be a lesson for the College. If administrators had been able to recognize and admit their wrongdoings early on, the issues might have been resolved without arbitration,” College senior and SLAC co-chair Michael Kennedy said.

He added that the incident should be a point of shame for the College, which prides itself on its liberal policies and activism.

“Students, alums, and community members should be ashamed that OCOPE’s contract was infringed upon and that the administration did not take up responsibility for their errors until legally mandated to,” Kennedy said. “I hope this ruling pushes the College towards an approach of respecting and resolving the issues brought up by all employees.”