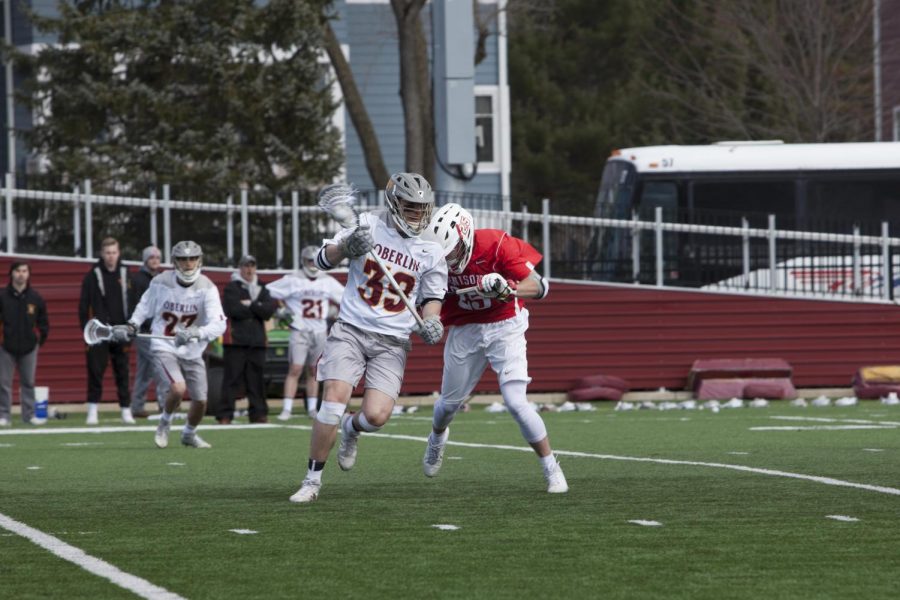 Senior attack Ian McCague drives to the net against a Denison University defender April 7. McCague enjoyed a successful senior season, ending with 16 goals and five assists for a total of 21 points at the Yeomen’s final game last Saturday.

The men’s lacrosse team ended their season with a 14–13 victory against the DePauw University Tigers last Saturday. The win capped off a three-game win streak that helped them finish on a high note after an overall disappointing season, hopefully building some positive momentum going in to next season. With an 8–7 record, 3–5 in the North Coast Athletic Conference, the Yeomen will not compete in the playoffs but have enough reason to be optimistic about next spring.

Senior attack John Sutherland, who scored the game-winning goal against the Tigers, was happy to end his career on a high note.

The Yeomen got off to a sluggish start against the Tigers. After letting up four unanswered goals in the first seven minutes, the Yeomen were lucky to finish the first quarter with a 5–5 tie behind the two-goal effort of first-year attack Tom Decker. In the second quarter, the Yeomen were much more explosive, scoring five more goals to give themselves a comfortable 10–6 lead going into halftime.

The Tigers returned to shut the Yeomen out for 15 minutes, scoring four in the third quarter and allowing none. The two teams then traded goals for the remainder of the final quarter — including a late score by senior midfielder Reese Koburov — until Sutherland finally helped his team break away, scoring the game-winning goal with just 35 seconds left. In what was Sutherland’s best season of his career, he netted 22 goals and dished out 11 assists. His performance against the Tigers also earned him his first career NCAC Player of the Week award in his final week of collegiate lacrosse.

Sutherland felt humbled by the award, and was even more thankful to his teammates.

“It was definitely an awesome feeling,” Sutherland said. “I’m obviously [happy] we won, but it was really nice to get recognized like that. If you look at the goals I scored, they were assisted. It wasn’t like I was going out there and doing it by myself. Every time I scored, there was someone who had to draw a slide or had the awareness to find me. I have the easy part; I just catch it and put it in the net.”

With a 13-man first-year class, the Yeomen are poised to take a shot at the playoffs next year, which has eluded them for the past several seasons. Their win against the Tigers was their first against a playoff team in four years. With huge performances from rookies like first-year midfielder Thomas Berle Carman, as well as returning sophomore goaltender Calvin Filson, the Yeomen will likely build on their three NCAC wins to make the tournament.

Junior attack Jay Messina said it will be difficult to see his senior leaders go but is confident that what they helped create in their last season will carry on for a few years to come.

“We have some really strong senior leaders [who will be tough to lose],” Messina said. “[However,] it’s a really good momentum swing going into next season. It’s really good for team morale — especially with such a large first-year class — having an above .500 season and win-type culture to push for next year. Our first-years are going to see the culture we’re trying to push and help continue that to make our seniors and alumni proud.”