The Oberlin Review • May 4, 2018 • https://oberlinreview.org/16315/arts/deborah-kamen-associate-professor-of-classics/ 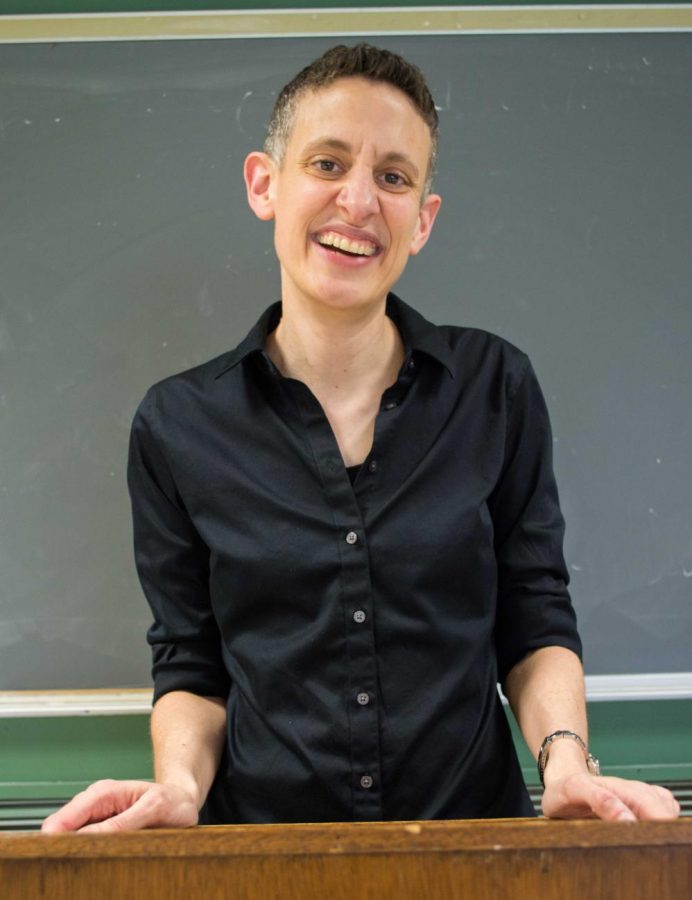 Deborah Kamen is an Associate Professor of Classics at the University of Washington. She is also an adjunct professor in Gender, Women and Sexuality Studies, and the graduate program coordinator at UW. She earned her Bachelor of Arts from Bryn Mawr College; a Master of Studies in Greek History from New College, Oxford; and a Ph.D. in Classics from University of California, Berkeley. Her interests include Greek and Roman social history, sexuality, slavery, and status. Kamen is widely published and her first book, Status in Classical Athens, is about social and legal statuses in Classical Athens. Kamen gave a lecture titled, “Your Mother Sells Vegetables! Status Insults in Classical Athens” in Oberlin yesterday, focusing on status insults, citizen status, and the difference between benign and offensive comic mockery.

Can you tell me a bit about how you got into Classics and your academic journey?

I started taking Latin in high school and fell in love with the language. I went to Bryn Mawr and I picked up Greek when I got to college. Originally, my interests were very much language based. I liked learning about languages, grammar, and got into literature. At a certain point, I discovered that what most interested me, and touched on my interest in general, was sort of social history, especially issues of status. When you read ancient literature, there’s a certain picture you get of the ancient world, which is all about “great men.” But I became interested in, you know, what about slaves, and what about women, and those who don’t have a voice? And so that kind of became a path I took.

What kind of sources did you use to write your book and articles?

One of the biggest sources [for the talk] is these Athenian law court speeches. We don’t have transcripts from trials from antiquity, but people would write speeches to deliver in court and then because they were models of … good rhetoric, they were copied and studied by students. So we’re lucky to have hundreds of these court speeches … from [which] we get a sense for what kinds of … language [was] used in court, [and] also glimpses of laws. And so you’ll cite a law that says, “You can’t call someone a murderer,” or whatever, and then that’s our evidence for that.

For this project I’m using comedy to a certain extent, so comic plays put on stage which are, at least for Athenian comedy, full of insults. Especially [in] Athenian comedy, it’s these prominent public figures who are kind of like Saturday Night Live [characters] or something like that, where they’re all taken down and insulted, in a joking, ribbing kind of way. It’s a great source for seeing what kinds of things people are insulted for and the language being used in those incidents.

Can you tell me how insult comedy today is different as compared to what it used to be?

That’s an excellent question. At least the biggest forum for insult comedy right now is late night television. And in that case, it’s usually just one person, talking about the news, giving it a funny or satirical spin, and then mocking some celebrities or politicians. This was a very established literary forum, which is a comedy you are putting on. You have characters who are based on [real people]. So in a sense, the only thing that we have that’s kind of similar is Saturday Night Live — actors playing famous people and then they come off as buffoons and whatever.

I think that’s probably the closest thing we have to ancient comedy. For the most part, I’d say most of what we consider insult comedy today is stand-up, or late night [shows].

What do you think is the connection between status insults and hate speech?

They didn’t have a concept specifically of hate speech in antiquity. To me, it seems like a parallel that could be drawn in that, to protect the interest and identity of certain people, certain laws were established to prevent language from being used. Now, they weren’t concerned about protecting foreigners or slaves. For the most part, they weren’t that concerned. But to the Athenians, people who they thought of as [having] very precarious status, … poor citizens, those people are a protected class in a sense. And so I’m trying to argue that the reason you’re not allowed to insult people by saying, “Your mother works in the market,” is because for those poorer people who can’t afford to defend themselves, they need extra protection, and that’s kind of like hate speech legislation. Now, again, [it] doesn’t exactly map onto our ideas, but what I’m trying to get at is that Athenians are so devoted to this ideal of freedom of speech.

What are people interested in Classics pursuing right now?

I think that really depends on the field — the subfield of Classics you’re in. I’d say within the last 10, 20 years, what’s become much more hot is studying the subaltern and studying marginalized individuals, marginalized voices. And that sort of continues to be expanded as people think to look for other categories of individuals. First it was just for women … and then it was … how the Greeks are talking about foreigners or their set of prejudices and assumptions. But currently I think there’s interesting work being done, say, in gender and sexuality, [like] was there a conception of something like the trans individual in antiquity. That’s, I think, the kind of direction that we’re moving [in] now, as categories and identities are multiplying, understanding of categories are multiplying, we’re starting to kind of turn to the ancient world and see how that illuminates things there.

What are you working on in the future?

I only am sort of giving a slice of this now, but [like] I said, there’s other aspects I’m really interested in. For example, sexual insults. The ways in which sexual insults can be used, not just to hurt someone’s feelings or make them feel un-manned, but in the case of democratic Athens, where, for example, a male prostitute is disenfranchised, even if he were born a citizen. Calling somebody, saying of some man that he is the object of sexual penetration or something, could actually jeopardize the citizen’s status. And so that’s the kind of stuff I’m looking at as well.