The Oberlin Review • May 4, 2018 • https://oberlinreview.org/16318/arts/ben-franklin-closes-poetry-month-with-oslam-reading/ 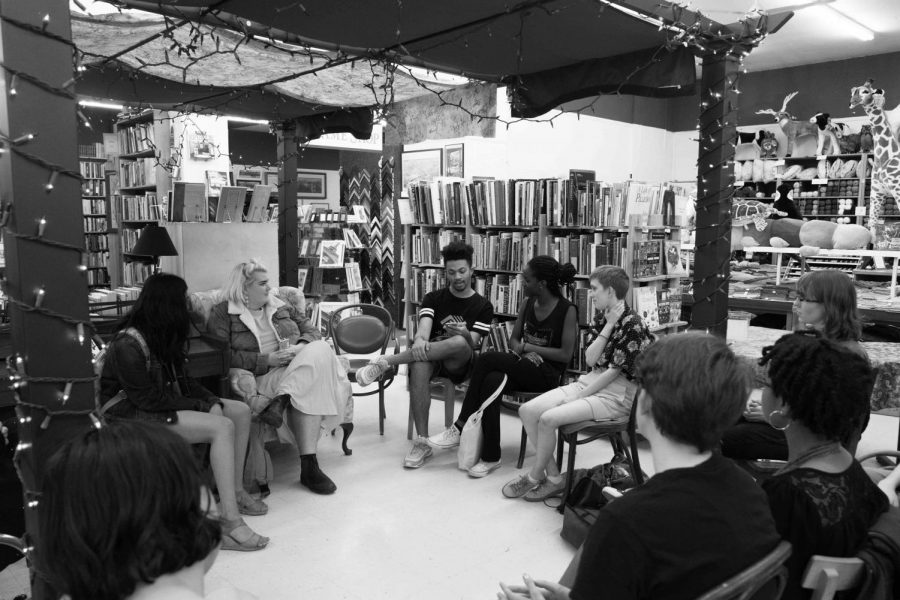 OSlam team members connect the College and town through poetry in the cozy, intimate mid-store gazebo in Ben Franklin Monday. The setting allowed performers and audience members to sit side-by-side in a circle. The poetry reading celebrated the end of National Poetry Month, and also featured some poetry from non-OSlam members.

Ben Franklin and MindFair Books hosted a small, intimate poetry reading featuring OSlam poets in their mid-store gazebo Monday. This wasn’t a regular performance with a large crowd and deafening applause, but more personal, as listeners sat beside speakers. The event was evidence of Ben Franklin’s efforts to overcome the alleged college and town divide. The reading, held in this particular space, welcomed students into the town, creating a warm atmosphere through a shared love of poetry. The store stayed open past normal hours for a flash mini-reading to celebrate the end of National Poetry Month, keeping the interaction succinct out of respect for the stressful time of year for students.

Ben Franklin often collaborates with MindFair Books to invite beloved authors and poets like Margaret and David Young to read their work to audiences. It has also hosted numerous musical events over the past several years, including a performance by Conservatory junior Aliya Ultan- Meyer on the cello and some live jazz performances.

“We were invited to come to Ben Franklin because the wonderful owner came to the sam sax [OC ’09] show, and she really liked our poems,” said Hanne Williams-Baron, a College junior and OSlam co-chair. “She invited us to come into her space because Ben Franklin is celebrating April, [which is] National Poetry Month, so they’ve been having a bunch of cool readings and events here.”

Ben Franklin’s original owner, John Cochrane, brought the store to Oberlin in September 1935 and most recently, Krista Long purchased it in 2001. Over the years, Ben Franklin has developed different avenues of business, such as supplying both new and used books, natural and sustainable products, and engaging in fair-trade merchandising.

Ben Franklin also supports local producers by sourcing goods such as honey, maple syrup, and beauty products locally. The store also prides itself on its initiatives to foster the literary community at Oberlin with poetry readings, workshops, and performances.

“I have been in Oberlin for almost three years,” Ben Franklin event coordinator Sherri Chavez said. “Working in the bookstore, looking at the rich poetry history that Oberlin has because of the College, and just because of the people who have lived here in this town, it just feels like something that Oberlin should continue to be known for.”

Chavez attended sam sax’s poetry reading at the Cat in the Cream on March 29. Several members of the OSlam team opened the event for sax, which caught Chavez’s attention.

“I think that the Creative Writing department here at Oberlin is wonderful, and we’re just thrilled to be a vehicle where people can come and share what they’re working on in an environment where they can feel comfortable,” Chavez said. “We hope to continue to build that here at Ben Franklin through our poetry group on Tuesdays and through other events we have throughout the year.”

The OSlam performers at Ben Franklin featured several members of the College Unions Poetry Slam Invitational team that went to Philadelphia this semester, including College sophomore Zite Ezeh, junior Sarah Ridley, sophomore Jalen Woods, and Williams-Baron. The OSlam CUPSI team competed in the preliminary rounds of the tournament before being eliminated.

Other OSlam members who performed at the mini-reading included College senior Jane Werntz and junior Naomi Liss. Performers showcased some of their new or previously unheard poems, reinforcing the admiration of poetry-fans on campus.

“I’ve been to some OSlam events and am always blown away by the poets and the writing that Oberlin students do,” College junior Cecilia Wallace said. “Something that I really like about Oberlin is that we have such an incredible Creative Writing program, really incredible spoken word artists, and that’s something that I like to just follow around and enjoy. I feel like a fangirl. I just follow people to events.”

The setting in Ben Franklin broke down the barrier between audience and performer, allowing both to sit side-by-side in a circle and share art. The space allowed non-OSlam members to share some of their poetry as well, so that all speakers could be vulnerable yet comfortable with their mostly unheard, new pieces.

“It was really cozy, and it was really sweet,” Wallace said. “I think Ben Franklin is a space that has really elegantly combined the Oberlin community with Oberlin College and with reading, and that’s something that I love about it.”

Ben Franklin is also promoting the first Oberlin Poetry Walk. Thirteen poems will be framed and displayed in 13 store fronts, until the next round of selections, submissions for which are due June 15. Students, faculty, residents, and anyone connected to Oberlin can participate in this event. It is for all ages — one of the youngest writers in the first selection is a sixth-grade student.

“Poetry Walk is designed to encourage participation from everybody,” Chavez said. “We’re hoping … to get word out to students through help from the College. It will be wonderful to help that be a bridge between the town and the College.”

Oberlin’s first Poetry Walk was kicked off with a reading of the first set of poems in the Firelands Association for the Visual Arts Gallery on Tuesday. Ben Franklin also hosted this event, and hopes to continue the tradition of sharing poetry through various events and happenings in Oberlin.