The Oberlin Review • May 4, 2018 • https://oberlinreview.org/16357/news/college-students-join-mcdonalds-boycott/ 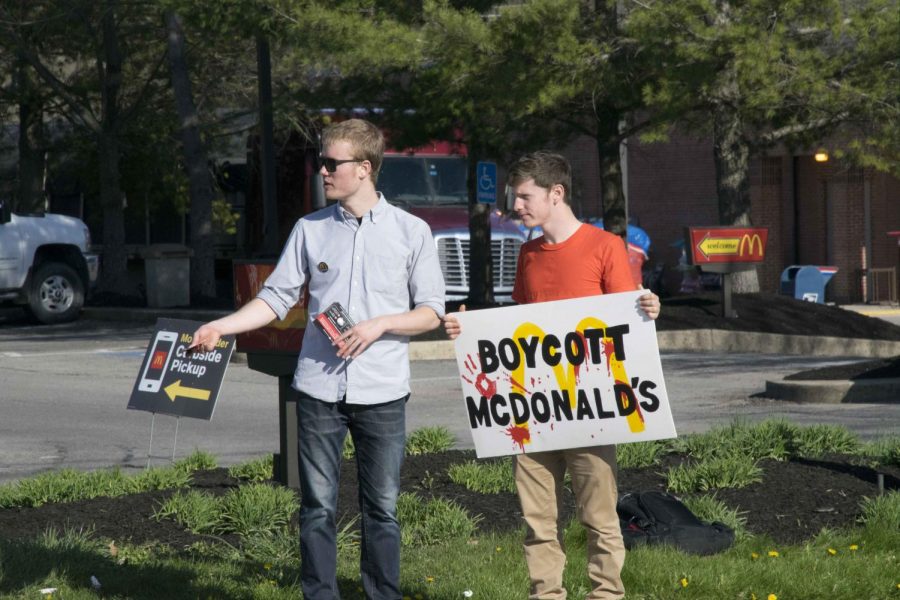 College junior Haven King-Nobles and College sophomore Leo Hochberg protest outside Oberlin’s McDonalds as part of a nationwide movement against the chain.

Members of Oberlin Animal Rights held a two-hour protest and posted flyers outside Oberlin’s North Main Street McDonald’s Monday to protest inhumane animal conditions and food sourcing as part of a nationwide campaign against the franchise.

Although OAR’s effort was a small, three-person protest, the national mission of the campaign is to exert pressure on McDonald’s and convince the chain to adopt stricter regulations for suppliers in their treatment of chickens.

“We’re working in conjunction with a nationwide campaign that’s asking McDonald’s to improve the welfare policies of their chickens,” said College junior and protest organizer Haven King-Nobles. “This nationwide coalition includes groups like the Humane League, … Mercy for Animals, Animal Equality, [and] Compassion in World Farming.”

“Generally, I was [satisfied with the protest],” OAR Liaison and College sophomore Lily Lu-Lerner wrote in a message to the Review. “We seemed to positively engage with those who were curious about our campaign, and as the protest went on, we were more able to communicate concisely and capture the interest of the public.”

According to OAR, activists have singled out McDonald’s for its refusal to meet industry standards in animal welfare policy.

“Many of McDonald’s competitors have already committed to the ask that we’re going for,” King-Nobles said. “Namely that they switch to higher welfare breeds, that their chickens grow slower, at a more healthy rate for their bodies, and also that they’re less crowded and they have cleaner, more natural conditions.”

“Chickens raised and killed for McDonald’s food are still selectively bred to grow unnaturally large, unnaturally fast,” one flyer reads. “Overcome by their own genetics, many die of organ and heart failure.”

The national campaign began after McDonald’s released what the Humane League categorized as an unsatisfactory public chicken welfare policy. The policy itself arose from months of dialogue between animal protection NGOs and the restaurant chain.

Unhappy with the result of the previous discussions, the Humane League and its allies ran an ad in The New York Times March 25 requesting that the restaurant franchise adopt more scientific standards for meat-sourcing. The campaign, I’m Not Lovin’ It, began two days later.

While the overall goal is to pressure McDonald’s to accept stronger animal protections, each protest also has its own independent goal.

“[Our] goal for today is two-fold,” King-Nobles said. “Primarily, we want McDonald’s executives or higher-ups — whoever supervises this restaurant — we want them to hear about this. The second goal, which I think is also important, perhaps less important, is that we educate individual consumers about it.”

The Humane League has said that the I’m Not Lovin’ It campaign is its biggest campaign yet and has planned for dozens of ads and events to pepper Chicago, where McDonald’s is based. Similarly, Oberlin activists see their protest as the start of a longer local campaign.

“I expect we’ll be out here as long as it takes,” King-Nobles said. “I’d love to get something going every week. I’d like to get to know the managers a bit more, get a bit friendly with them — hopefully they won’t hate us too much because we have nothing against them. We just want them to be aware where their food comes from and hopefully encourage their company to make more ethical decisions.”

For the Humane League and to local animal rights activists, the battle with McDonald’s is a crucial one to win in the fight for animal rights.

“This campaign as an effective way to improve the welfare of chickens,” Lu-Lerner wrote. “As always, I wish there were [something] equally effective to do more for the chickens, but since McDonald’s is a massive chain which sells an abundance of chicken meat, shifting their welfare policies would have an enormous and prolonged impact on the wellbeing of chickens.”

The conclusion of the NGO’s background information sheet sums up the strategy in its entirety.

“Ultimately, a policy from McDonald’s will lead to a complete overhaul of the American chicken industry, dramatically reducing the suffering of billions of animals annually. It’s time for McDonald’s to change.”

OAR meets weekly, is working to ban puppy mills in Ohio, and is planning a trip to an animal sanctuary May 12. Oberlin students are free to join.