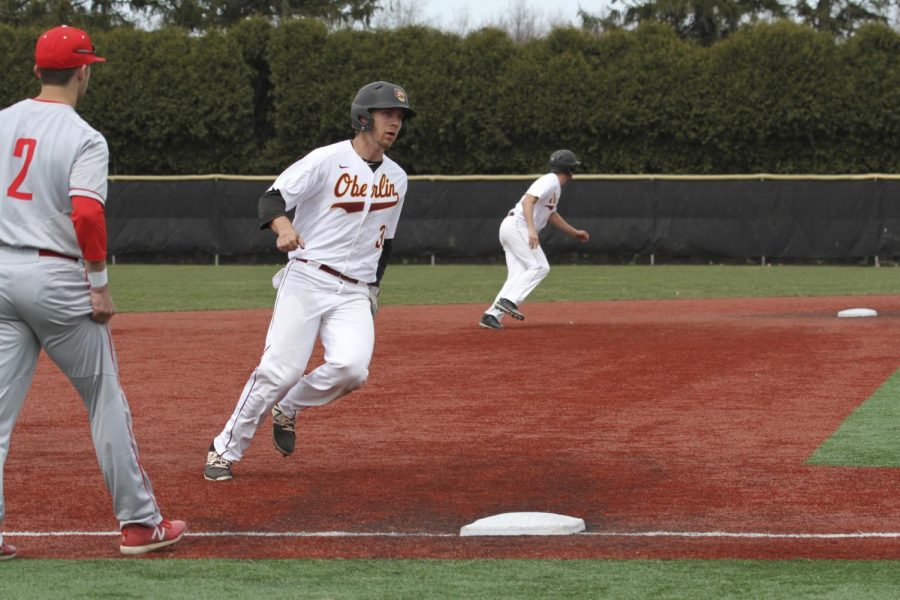 Junior third baseman Ian Dinsmore races around third base in an April 21 doubleheader against Wabash College. Although the team will not make its goal of earning a spot in the NCAC tournament, Dinsmore and his teammates look to end the season on a high note this weekend with doubleheaders against Hiram College and Cleary University.

The baseball team collected three more losses this week in what has been a disappointing season for the promising squad.

After making the North Coast Athletic Conference semi-finals last season, expectations were high for the Yeomen, but now — at 10–26 overall and 2–14 in the NCAC — returning to the playoffs is out of the question. The Denison University Big Red swept the Yeomen in a two-game series Wednesday, and their game against the Heidelberg University Student Princes Monday was representative of the season, as they let up a shocking 29 runs in their 29–13 loss.

Sophomore outfielder Jack Marsjanik recognized that the Yeomen are out of contention but still sees these last few games as a way to build some positive momentum for next year.

“At this point we’re really just trying to build up momentum and confidence going into next year,” Marsjanik said. “It was nice to see our offense come alive [against Denison], but unfortunately it wasn’t enough to get a win. Everyone is really looking forward to [Senior Day tomorrow], and hopefully we’ll be able to end our season on a positive note with sweeps of both [Hiram University] and [Cleary University].”

The Yeomen pitching staff had no answer for the rival Big Red’s offense in the Yeomen’s second-to-last conference series of the year. In the first game, junior pitcher David Gaetano let up three runs in the first inning, and the Big Red were able to cruise to victory from there.

The Yeomen offense lagged as well, only scoring one run through the first seven innings off an RBI single from senior first baseman Quin Butler. In the eighth inning, the Yeomen were down 7–1 but managed to close the gap to four when first-year right fielder Lawrence Hamilton took home off an error and Butler hit another RBI. However, the Big Red scored 11 runs through the final two innings in their decisive 18–6 win.

Assistant Coach Brandon Jossey said the NCAC’s transition into a round-robin schedule has been challenging for his team, but he was satisfied with how they responded in the second half of the doubleheader.

“This year we ended up playing every team in the conference twice in one day instead of half of the conference four times in two days,” Jossey said. “Typically, in the sport of baseball, games are spread out over the course of 2–3 days in order to get a look at how much depth the team has and to see how teams respond after a good or bad day. In a one-day matchup, one team might carry a ton of momentum and energy and have one really good day. I don’t know if it helped or hurt our season, but the format change is definitely something worth discussing.”

Oberlin made some adjustments in the doubleheader as the offense jumped out to a 2–0 lead in the first inning off a home run by junior catcher Brandon Mapes. Denison was quick to respond, scoring four runs in the second inning with junior pitcher Noah Gear on the mound. In the third inning, the Yeomen fired back with three more runs of their own, including RBIs from sophomore center fielder Amari Newman and senior designated hitter Jack Brewster. In the bottom of the third, Denison reclaimed the lead with two more runs, and carried their 6–5 lead all the way to the sixth inning when they scored three more runs from a bases-clearing triple off senior pitcher Milo Sklar. In the seventh inning, Newman and Sklar recorded RBIs in a four-run effort that tied the game at nine a piece. The game would remain tied until the bottom of the ninth, when Sklar gave up the winning run off a wild pitch.

Gear noted that with so few games left, each player has to individually find their motivation for closing out the year.

“Well, to start, we’re all pretty disappointed in how the season went,” he said. “Now that our common goal isn’t going to happen, we’re all playing for different reasons. The seniors want to play well to end their careers, the juniors and sophomores are looking to build something to hold our heads high about in the fall, and the [first-years] are trying to win some spots and prove something to the coaches.”

Looking forward, the Yeomen will host the Terriers on Saturday and the Cougars on Sunday, each a two-game series. Senior pitcher Sean Kiley said he looks forward to playing alongside his teammates one last time.

“I know being here has done a lot for my development as a person, as well as a baseball player, and I’m grateful to have been given [the opportunity to play here],” Kiley said.

The Yeomen will be graduating seven seniors this season, and losing the last remaining members of the 2014 NCAC Championship team will be a challenge for next spring’s squad.