The Oberlin Review • May 4, 2018 • https://oberlinreview.org/16378/uncategorized/yeowomen-clinch-third-place-in-ncac-championships/ 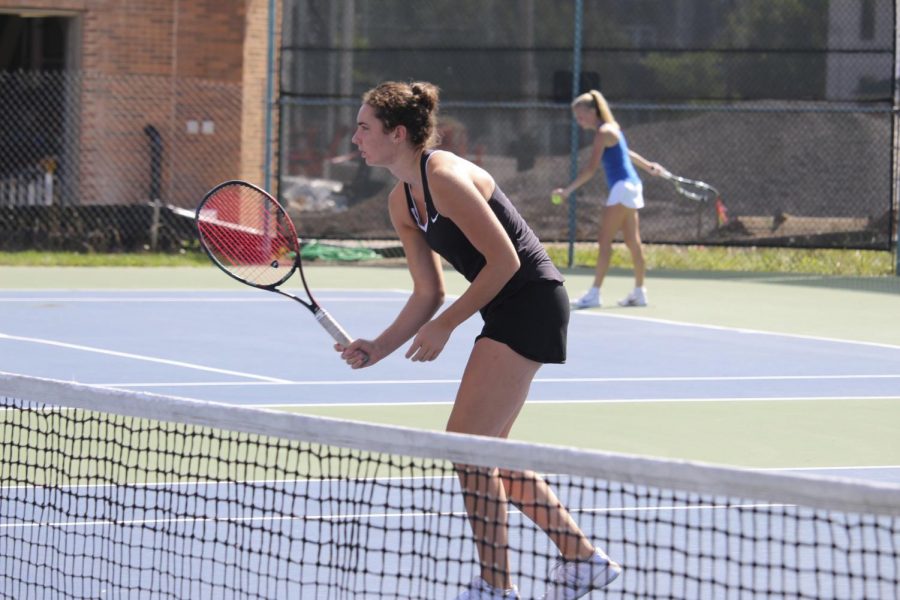 The women’s tennis team finished its season by winning third place in North Coast Athletic Conference tournament last weekend. As the third-seed in the tournament, they first played the sixth-seeded Ohio Wesleyan University Battling Bishops last Friday. After dropping the semi-finals to the second-seeded Denison University Big Red, they played their final match against the fifth-seeded DePauw University Tigers Sunday.

“The season was very successful,” Women’s Tennis Head Coach Constantine Ananiadis said. “We had more wins … than last year after having lost two key players [the season before]. A lot of people stepped up and … had big improvement.”

The Yeowomen quickly disposed of the Battling Bishops in the first round of the tournament in a decisive 5–0 victory. In the doubles flights, the Yeowomen established a lead out of the gate, winning their first three matches. Seniors Sarah Hughes and Mayada Audeh clinched an 8–3 win in the top-flight doubles. Following them, senior Jackie McDermott and sophomore Lena Rich won their match 8–4, and sophomores Delaney Black and Rainie Heck also dominated 8–4. In the singles matches, the Yeowomen were just as victorious. McDermott beat her opponent with 6–3 and 6–2 sets while Rich triumphed with 6–1 and 6–0 sets, racking up to a straight 5–0 victory.

“The conference tournament is kind of a unique thing,” McDermott said. “You play to decision, so you play until one team gets five matches. The matches can be shorter. … Physically, it tends not to be as grueling as some of our other weekends in the season. … For me that was the case this weekend. I felt physically fit and ready to play well all three days, but mentally, it is tough.”

In their first matchup against the Big Red since last season’s third-place match, the Yeowomen had no answer for the second-ranked team. In the top two flights of doubles, the Big Red scraped by the Yeowomen 8–2 and 9–7, but the dynamic duo of McDermott and Rich once again added to their team’s scoreboard with an 8–3 win in the third doubles match. Going into the singles, with the Big Red leading 2–1, Audeh tied the score in the second singles match after fghting to the bitter end of three sets. However, after winning the first and fourth matches against Heck and McDermott, Denison clinched the game in the sixth singles match against Rich for a final game score of 5–3. Hughes, who has carried the Yeowomen as the top singles and doubles player all season, didn’t have time to finish her match before the Big Red won.

The Yeowomen entered the final day of competition out of contention for the first-place prize, but were still able to make it by the Tigers in a nail-biting 5–4 game. After losing two out of the three flights of doubles, the Yeowomen entered the singles portion of the competition trailing 2–1. Hughes brought the heat and quickly equalized the score to 2–2 after crushing her opponent with 6–1 equal sets in the top flight. Rich also continued to win her match with two 6–0 sets. With the score tied at 4–4 and just McDermott left on the court, her match would ultimately decide who won. McDermott fought through three sets, losing the first but winning the last two with 6–4 counts and bringing the season to a close with a third-place finish.

Hughes reflected on the season and commented that despite the third- place finish, the final few matches of her career have been bittersweet.

“I don’t know what I’m feeling to be honest,” she said. “It was such a long and grueling season, and I am proud to have made it out the other side, but I’m sad [and] grateful for the friendships and memories I’ve made. It is a mixed bag, which I’m sure most [senior athletes] … are feeling at the moment.”

The team will bid farewells to three seniors: Audeh, Hughes, and McDermott — who have cumulated 331 wins in singles and doubles throughout their four years competing at Oberlin. However, with a solid core of sophomores Rich, Black, and Heck, the team is sure to be back in action this September.