The Oberlin Review • May 4, 2018 • https://oberlinreview.org/16383/sports/in-the-locker-room-with-sonia-bloom-preying-manti-frisbee-player/ 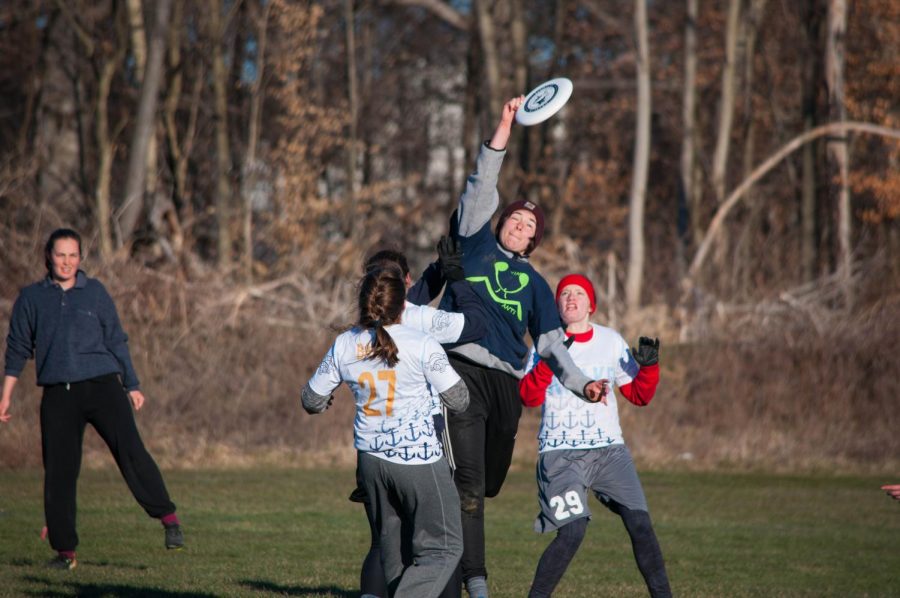 College senior Sonia Bloom joined the Preying Manti, the women’s and trans Ultimate Frisbee team, during her second year at Oberlin. Since then, the team has been a major part of her college experience. For the first time in two years, the Preying Manti will compete at the DIII College Nationals May 19–20 in Rockford, IL. The Preying Manti beat Lehigh University 11–4 on Sunday to advance. The Flying Horse Cows, the men’s team at Oberlin, will also advance to nationals competition after earning a victory Sunday. It is the first time that both teams will compete at nationals in the same year.

How long have you been a member of the Preying Manti?

I’ve been playing since my sophomore year. I didn’t play my freshman year because I was injured, but I played Ultimate in high school, so I knew that I was going to join. This is my third year on the team. I started playing in high school because I really wanted to play a sport. I played a bunch of sports in middle school and had played Ultimate at summer camp, which is a common way that people get into it. My high school had a team, and there were no tryouts or anything. It was just a commitment, which is pretty common for a lot of Ultimate teams, especially at the youth level. I just loved it — Ultimate is a unique sport in terms of how it functions as a community. It’s self-refereed, and there’s a lot of different variables that go into making it a really tight-knit national and international space. I actually played with an Ultimate team in Spain while I was there over Winter Term. If you are an Ultimate person, you can find Ultimate people everywhere.

Do the two teams practice together? How often do you practice?

We usually practice separately. Last semester, for the first time, we actually sent a mixed team to mixed regionals, which is like a new tournament they just started, which was so fun. But they function as two separate teams. We usually practice around four to five times a week — it’s intense. It’s a club sports team, [which is how] it functions everywhere because of the way it’s set up. There’s a different buy-in when it’s your personal commitment, and you’re like, “I’m gonna go to this whenever I can. I love it, and I know that I’m gonna get better by going.” It’s a different tone and vibe that is created. This season, something that has been really different from past years is [that] there’s been a lot more [of a] mental element. We do a lot of mental check-ins, we have classroom time where we look at footage, and that’s something that normally Ultimate teams don’t do because of navigating that line — respecting people’s time and not having it being considered serious as a varsity sport. But that’s something that has given us an edge this season.

How many people are on the team? How often do you compete?

From year to year, it’s usually between 30 and 40. On our A-team, we have 18. We split A and B most years — the Manti do and so do the Horse Cows. The spring season is the competitive season. We just had regionals this past weekend, so that’s part of the postseason, and before that we had sectionals, which was just Ohio. April ends up being a crazy month because we’re gone for at least two of the weekends. Before that, we had gone to two sanctioned tournaments and also spent spring break playing together in Myrtle Beach.

Do you prefer that Ultimate remains a club sport rather than turning into a varsity sport?

I think that’s something that people talk about beyond Oberlin. In my relationship with Ultimate, there’s always been a fight for legitimacy. At my high school, we didn’t get any funding from the school. At a lot of colleges, [teams] don’t get funding from the school. We’re lucky we have club sports the way they are [at Oberlin]. Also people [sometimes say], “Oh, Ultimate? That’s an activity, not a sport.” All of that rhetoric is very common. I think there are parts of [Ultimate] being a club sport that make the culture very unique, but I also think that Ultimate is in a good position to ask a lot of hard questions about sports culture and equity in sports, because it’s so comparatively new. There’s so much work to be done in that regard, and I think that fits into that question of [whether] it should stay a club sport or become a varsity sport.

What’s the community like in the sport, specifically at Oberlin?

Something that makes a club sport so special is that everyone can have their own personal relationship to it. There are definitely people on the team who can’t always come because they’re working a lot or have other commitments, and there’s definitely the flexibility for that. For me personally, it’s one of the top ways I spend my time outside of class. Something we always ask is, “How do we make this a community? How do we spend more time together both on and off the field?” We try to make it as positive a space as possible. We’ve been lucky this year to have Ally Fulton, [OC ’16] — who graduated from Oberlin two years ago and played on the team here — as a coach. It’s really cool to have someone who is affiliated very closely but has that level of someone who doesn’t appear in the same way because she’s graduated and serves to facilitate practices.

Both teams are advancing to nationals. What was that experience like when you first clinched a spot?

It was so great. There were a lot of parents who came because we were in eastern Pennsylvania. The Horse Cows were in Columbus, so a lot of parents from Boston and New York came. When we first won, there were a lot of tears. We also do shout-outs after every tournament, which is where we sit in a circle and go around and, for each other, say positive things. During that, there’s a lot of crying. We actually found out that the Horse Cows had won later, because their bracket was different so their game was later. It was great, because one person was like, “The Horse Cows just won!” It rippled as we were packing up, and everyone was just jumping up and down. This season, we were like, “We’re going to Nattys. This is happening. We’re gonna make it happen.” I know the Horse Cows were very much unsure, so they were super pumped to get that win.

Are the two teams close?

Yeah. I would say that over the years there have been a lot of ups and downs in terms of closeness. But getting to play in a mixed tournament last semester was really great for rebuilding relationships between the teams. We spend a lot of social time together even though we don’t play together that much. There are a lot of friendships across the teams.

What are you doing to prepare for nationals?

I’m actually going to practice right after this. Since we were away this weekend, I think there’s going to be a lot of thinking about goals that we have for nationals — personal and team goals. That’s something that we talk about a lot, but we haven’t re-checked in about that yet for nationals specifically. Especially at the end of the semester, it’s hard for everyone to keep coming and keep taking care of their bodies, because everything falls to the wayside with school. People are also gonna have to finish their finals early [for nationals].

Who joins Frisbee and how?

It’s a mix. There’s a lot of orientation planning. There’s a lot of casual tossing on North Quad, and so I think that during the first month or two of school we have a lot of first-years who come once and figure out if it’s a good fit for them. We definitely get a mix of people who have played Ultimate before and people who played a different sport in high school but didn’t want to play it here or their body couldn’t take it anymore, but they love sports and they love running. Orientation is a huge time for recruitment for us.