The Oberlin Review • May 4, 2018 • https://oberlinreview.org/16385/sports/mens-tennis-tops-battling-bishops-finishes-third/ 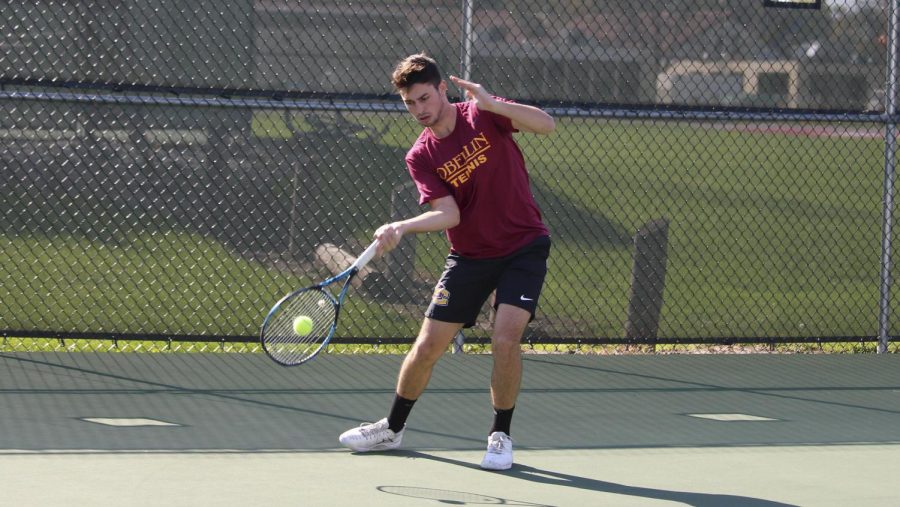 Sophomore Stephen Gruppuso had one of his best performances of the spring in the Yeomen’s battle with the Ohio Wesleyan University Battling Bishops Sunday. Gruppuso and fellow sophomore Camron Cohen earned an 8–4 victory at No. 1 in doubles play.

The men’s tennis team clinched third place in the North Coast Athletic Conference at its annual tournament last Sunday. After beating the DePauw University Tigers 5–1 last Friday, the Yeomen dropped their semi-finals matchup to the Denison University Big Red 5–1, sending them to the matchup for third place against the Ohio Wesleyan University Battling Bishops with another 5–1 win. Against the Bishops, the Yeomen won their second-straight third-place prize.

To senior Michael Drougas, who played his final collegiate tennis match last weekend, the tournament is the best place for the Yeomen to measure their skill and growth against their conference rivals.

“The NCAC Conference tournament is always a good opportunity to try to put the pieces together,” Drougas said. “It is the final event after a long, hard season, so the hope is that it can be a culmination of hard work and dedication in which we can play some of our best tennis.”

Against the Tigers, the Yeomen had little trouble advancing to the semi-finals. In the doubles matches, sophomores Camron Cohen and Stephen Gruppuso lost the first match 8–6. However, that would be the Yeomen’s only loss of the day, as Drougas and senior Manickam Manickam, as well as seniors Levi Kimmel and Robert Gittings, handily won their matches.

Entering the singles matches, the Yeomen had a 2–1 lead and enjoyed wins from Gruppuso, Manickam, and Gittings in the second, fourth, and fifth singles matches, respectively. With Gittings’ win — a 6–2, 7–5 dredging — the Yeomen won the game 5–1, leaving Drougas, Kimmel, and sophomore Zachary Vaughn still on the court.

“Coming out on top against DePauw was a very special moment for the team after losing to them in a close battle last year,” Gruppuso said. “The leadership of our four seniors is the reason why we accomplished as much as we did this spring.”

Despite their victory over the Tigers, the Yeomen couldn’t topple the Big Red in the tournament’s second round. Denison eliminated the Yeomen and sent them to the matchup for third place. The Yeomen had no luck against them in the doubles matches, losing all three. After Kimmel and Gittings dropped the third doubles match 8–0, the Yeomen were unable to find their composure in the singles matches. Cohen managed to get the lone win of the day 6–4, 6–3, but Vaughn, Manickam, and Drougas were all unable to finish their matches before Big Red had clinched the win 5–1.

After their comptetition with Denison, Drougas said that the Yeomen were not willing to lose their final match of the year, even if they had already been eliminated from first place.

“The fear is that after a tough loss against an opponent who you really want to beat that there could potentially be a letdown,” Drougas said. “I think our team responded in a mature way, however. Knowing that it was the last match of the season, everyone really wanted to finish with a decisive victory, and we were able to do that.”

Moving on to play the Battling Bishops, the Yeomen did not disappoint, giving up just one match in a 5–1 win. In the doubles matches, the Yeomen swept, including a nail-biting 9–8 win from the new duo of first-year Elliot Nuss and junior Matthew Gittings. With a 3–0 lead, it didn’t take much time for Kimmel and Vaughn to collect singles wins and take the game 5–1. The win gave the Yeomen’s back-to-back NCAC third-place finishes.

As of now, the Yeomen have only five players returning, as they will lose four seniors in Drougas, Manickam, Robert Gittings, and Kimmel, but with a strong core of Gruppuso and Vaughn, a few great recruits could put the Yeomen right back in contention for next year’s NCAC Tournament.

“The team has gotten stronger every year I have been here,” Drougas said. “That is great to see and I am happy to have been a part of that growing process. I look forward to watching future teams continue to build on the progress that we have made as a team over the past four years.”