The Oberlin Review • May 11, 2018 • https://oberlinreview.org/16418/sports/historic-season-from-rauchle-not-enough-for-yeowomen/ 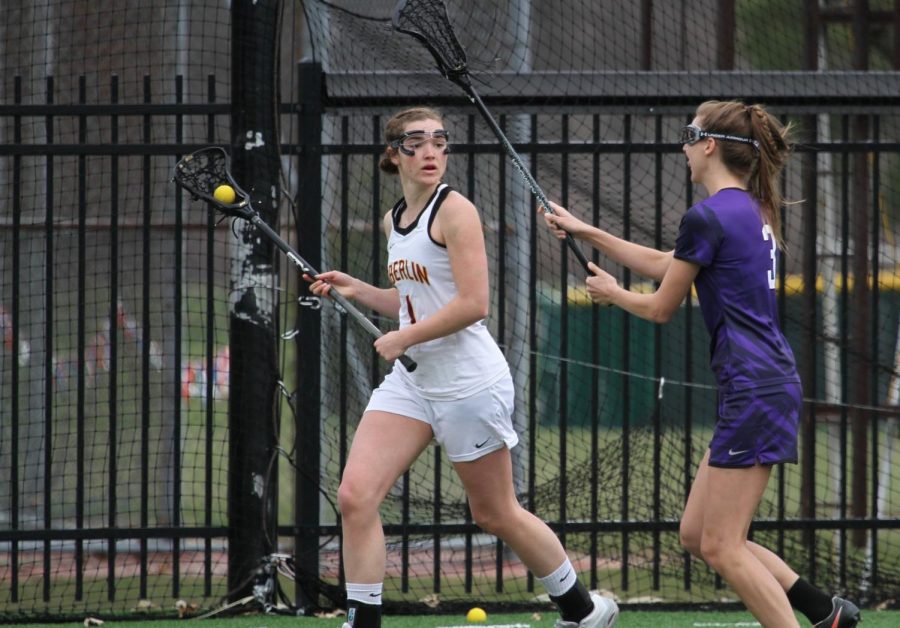 Senior midfielder Sydney Garvis attempts to rifle the ball past a Kenyon College Ladies defender on senior day. The Yeowomen ended their season last Wednesday against the College of Wooster Fighting Scots in the NCAC semifinals.

The women’s lacrosse team’s season came to a close in their matchup against the College of Wooster Fighting Scots in the North Coast Athletic Conference Semi-Finals last Wednesday. While the Yeowomen had hoped to return to the NCAC Championships after playing one of the best seasons in program history last year, they had no answer for the Fighting Scots’ relentless attack, losing 14–11. While senior midfielder and NCAC Offensive Player of the Year Natalie Rauchle — who will surely go down as one of the best athletes in Yeowoman history — was one of seven players to earn NCAC awards at the season’s end, they were unable to claim a championship in Rauchle’s final year.

With such high expectations entering the playoffs, junior defender Sydney Allen said that being too caught up in preparing for the championships and not taking the Fighting Scots seriously led to their downfall.

“It was disappointing,” Allen said. “I think we all had the mindset that we were going to win that game; we were all looking ahead to that [Denison University Tigers] game in the championships. We weren’t really present when we were playing Wooster, and that was a huge reason as to why we lost.”

Against the Fighting Scots, the Yeowomen found themselves playing catch-up with 12 minutes left in the first half, as they trailed 4–1. A few key goals from Rauchle, including her NCAC record-tying 80th goal of the year, helped the Yeowomen narrow the gap to 7–5 entering the second half. However, at the start of the second half, it was clear that the Yeowomen did not have the killer instinct that lead to their 17–9 win over the Fighting Scots in the regular season earlier this year. The Fighting Scots promptly had a six-goal run that crushed the Yeowomen. While Rauchle managed to set a new NCAC record in goals with two more in the final 20 minutes, bringing her total to 82 goals, it was clear that a win was out of reach. Down 14–9 with under two minutes to go, first-year attacker Tess Siciliano, junior defender Sabrina Deleonibus, and first-year midfielder Kyra Aviles all scored goals, but it was too little too late by their eventual 14–11 defeat.

Earlier in the year, the Yeowomen seemed poised to make a return to the NCAC Championship, but after losing sophomore midfielder and 2017 NCAC Newcomer of the Year Eliza Amber on their Senior Day matchup against the Kenyon College Ladies and watching multiple players quit throughout the year, the Yeowomen lost to themselves in what could have been a historic season.

“It was really tough to maintain,” she said. “This was definitely the hardest season I’ve played in my time here. Seeing people you love — your teammates — get hurt throughout the season, especially on such a small team, takes a toll on you.”

The Yeowomen had one of their most talented rosters in recent memory, and although the pieces did not quite come together for them to win a championship, their top players certainly got the recognition they deserved. In addition to setting the NCAC scoring record, and winning Offensive Player of the Year, Rauchle was also an All-NCAC First Team Honoree. Last year, she was named to the Intercollegiate Women’s Lacrosse Coaches Association Great Lakes All-Region First Team, and she will likely earn that honor once again later this month. Joining her on the NCAC First-Team was sophomore defender Emily Barner, while Garvis, junior midfielder Hayley Drapkin, and junior goalie Siena Marcelle were named to the All-NCAC Second Team. While Amber did miss the postseason, she and Deleonibus were named All-NCAC Honorable Mentions.

Junior Jenna Butler — who used to play midfielder but had to sit out the season due to concussions and became a player-coach this year — fully understands the mental struggle that the Yeowomen went through this year, but is confident that they can return next season.

“Not being able to play this season was definitely very difficult for me,” she said. “I love lacrosse and I’ve played my whole life, but what I realized is I’d rather be on the sidelines to support my team than not be a part of the team at all. I’m really looking forward to the possibility of playing next year, and I can’t wait to see what we can achieve next season. With seven incoming first-years, a talented sophomore and junior class, and six rising seniors ready to step into leadership positions, we will have the pieces in place to compete for a league championship once again.”

Looking forward, losing Rauchle and Garvis will surely be a huge blow, but with a plethora of talent and another year of experience, the Yeowomen are sure to be contenders once again next spring.