The Oberlin Review • May 11, 2018 • https://oberlinreview.org/16446/arts/chrysanthemum-tran-performer-poet-teaching-artist/ 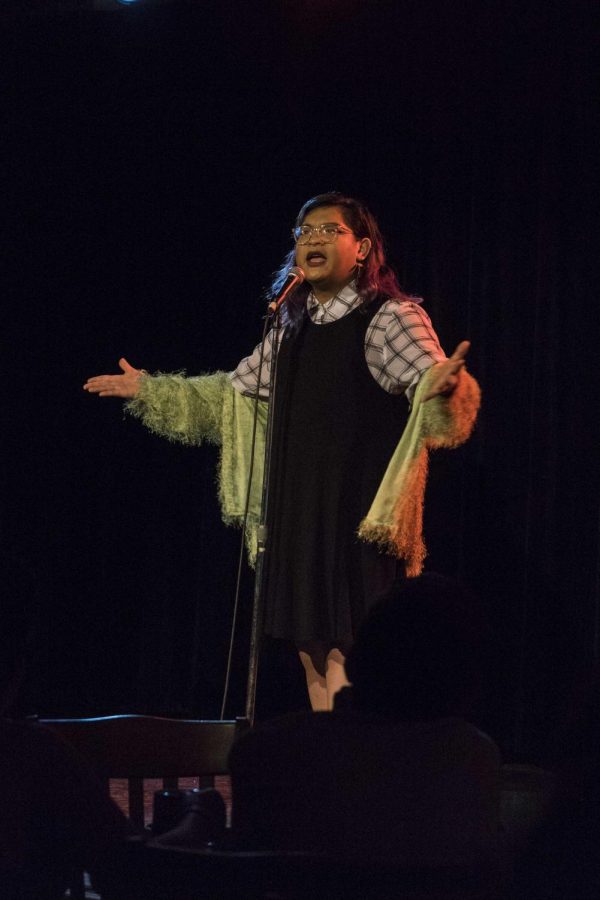 Chrysanthemum Tran is a transfeminine Vietnamese-American poet, performer, and educator. She is well-known for her role as a teaching artist for the Providence Poetry Slam youth team and becoming the first transfeminine finalist at the Women of the World Poetry Slam in 2016. Her accolades include Slam Champion at the Rustbelt Poetry Slam in 2016, FEMS Poetry Slam Champion in 2017, and Best Poet at the National College Slam in 2016. Tran is a queer POC icon and a Pink Door Fellow, and her work has been featured in various publications including The Offing, The Blueshift Journal, Muzzle Magazine, and the Bettering American Poetry Vol. 2 anthology. OSlam invited Tran to Oberlin yesterday for a poetry workshop at 4:30 p.m. and a performance at 7 p.m. at the Cat in the Cream.

Can you tell me a bit about your background, how you got into poetry and how you came to Oberlin?

Today I’m invited by OSlam and [College junior] Hanne [Williams-Baron, who] reached out to me. I’ve always wanted to visit Oberlin. I was rejected when I applied, so it feels very redeeming to come back as a guest. My partner’s father is also an alumnus of Oberlin. I was just looking back through my college application for Oberlin and the essay I wrote wasn’t very good. I’m not … mad about it. I’m originally from Oklahoma City, OK, and for the past perhaps five years I’ve been living in Rhode Island. I made the move for school, but after I dropped out I continued to stay within Rhode Island. Providence is called the “creative capital,” and I’ve been lucky to find a lot of queer and trans artists of color and other writers of color who I’ve really been able to find community with. Right now I’m a performer, a poet, and a teaching artist. So a lot of the time that I spend is reading my poems to rooms full of strangers. It’s kind of rewarding to be able to make a living by having my feelings exposed to a room full of strangers.

Who are your biggest influences and who you are reading right now?

My biggest influences are not always necessarily other writers, but there is definitely a writing lineage that I’m writing into. I’m currently finding that I return to authors like Natalie Diaz. I returned to writers like Suji Kwock Kim and I return to other writers who are known for doing what some might consider slam poetry, but I think there’s a divide between what people consider to be performance poetry and academic poetry on the page. Natalie Diaz and Suji Kwock Kim are more writers who are viewed as being academic poets, but I find that I’m also really inspired by my other performance poet peers. So I am always returning to poets like Porsche [Kelly]; I’m always returning to other writers like Paul Tran; I’m always returning to artists like Franny Choi and Crystal Valentine. And quite honestly, a lot of my biggest influences right now are my friends. A lot of the friends that I have — and those … people are not necessarily the ones I just listed — but like, a lot of my peers that I hang out with, we write together until early mornings. Sometimes I find that my biggest influence is through the friendship and sisterhood that I create with other artists.

I’m not currently reading anyone because I just quit my job, in which I was doing 40 hours a week working 4 p.m. to 1 a.m. I was at Starbucks, and that just really ate at my soul and really ate up my creative energy.

And so Oberlin is my first stop … on my tour [since quitting my job], and I met with my friends last night and I’m really excited to get back into the habit of reading and writing. [There are] so many books that I have on my list that I simply haven’t had the energy to read, but now it’s like, it feels like everything’s coming together.

How do you feel about photography, particularly in the context of the “selfie generation” and the obsessive social media photography that is rampant among our youth?

That’s a really interesting question because before I turned to poetry, I was convinced that I was going to make a lifetime career out of photography. My father was a photographer, and my mother retouches glamor shots. So like, if you ever get your photo taken at the mall or something, she’s the one who makes people look like plastic. And so I’ve always grown up in a very image-heavy kind of space. Even at family engagements, it was really important to always document and have images of what we were seeing. And I think maybe when I was around 15 or 16, I started turning to photography as a new way of trying to understand self representation. This really was before selfies became a large thing, before Instagram was a large thing, and I was using digital cameras and self portraits as a way of trying to build my visual art and my visual artistic language.

I really wanted to become a fashion photographer, like a fine art photographer or an editorial photographer. And it wasn’t until I got to college, and then I found that there was something that I had neglected with non-visual artistic mediums.

When I was in elementary school, growing up in public school in the United States, I always had a lot of problems with my speech. I was put into speech therapy very early on and whether it was because I learned English as a second language or my lisp or my stutter, it always seemed that there was something wrong with the way that I spoke and that it wasn’t recognized as a valid way of speaking. And so I really thought that by turning to a visual medium like photography, I would be able to hide my voice, which is an interesting thing in art, right? Like, trying to literally hide the sound of your voice through the visual image. And yet, when I got into photography, I had a mentor, my older sister Paul Tran, and I realized that there were some stories I simply did not know how to communicate just through photography and digital manipulation and that words and poetry was a new calling for me. Suddenly all the stories that I struggled to tell through photography, I finally was able to tell through poetry. And a lot of my photography was rooted in self-portraiture. So I simply had to think about, in what ways is poetry a verbal self-portrait? Now, when I think about what selfies do, I think it is powerful for young people, or people of all ages, to really have representations of themselves that they can control. And I don’t believe that there’s anything like an authentic self-representation because nothing in the world is necessarily authentic. It’s all controlled by what we want to put out there. And yeah, I think there are some critiques about like how selfie culture, especially among young, people can be very harmful to people’s self-image. But I would also say that for the past many decades, young people have always struggled with their self-image. I think that there’s hope in the fact that young people are able to control their image without having to necessarily be forced to look a certain way.

You have spoken out about colonialism. Do you think that when international speakers of English — particularly from colonized countries — write poetry and prose in English they are somehow taking part in their own colonization?

I think that’s one approach to it. But I think to be like a diasporic body in the United States always carries a certain contradiction and irony. My people in the diaspora are not in the U.S. by choice. We’re here because of the United States intervention in Southeast Asia during the Cold War. And because of that, a regime ousted many people from the country of Vietnam and now we’re in the U.S. speaking English. When I think about what it means to be from [Vietnam] specifically, to be Vietnamese people, over the past centuries we’ve been colonized or had imperial force through the U.S., through France, and through China. Since that beginning, there’s always been a loss of what is considered authentic, original culture. And yet, I think there is something authentic about being diasporic and having to forge your own kind of language. Because I would imagine that centuries ago, if everyone in this room right now were all together, we wouldn’t be speaking the same language. And it’s interesting that through this language of the colonizers, we’re able to express what kind of pain has happened to us. And yet I also think even more than that through this colonized language, we’re able to connect and find joy with people that we wouldn’t have been able to years ago — especially for a lot of people from marginalized backgrounds, from Black and brown people who come from experiences of colonialism. It’s really important to know that like, I’m not necessarily restarting my own colonialism by speaking English. I’m continuing their legacy and I think also the fact that we speak English is also part of assimilation. Like more recently, at the Met Gala a lot of people were talking about how, aren’t we all appropriating the Roman Catholic Church’s culture? And yet you can’t appropriate a colonial force that was used to forcibly converted people in the Americas, in the continent of Africa and parts of Asia. To continue participating in that legacy, I don’t think is continuing the colonialism. It’s trying to refute something that’s very contradictory and humans are full of contradictions. And that’s where we have to find home: in our contradictions.