The Oberlin Review • May 11, 2018 • https://oberlinreview.org/16472/news/students-testimonial-project-call-for-cds-changes/ 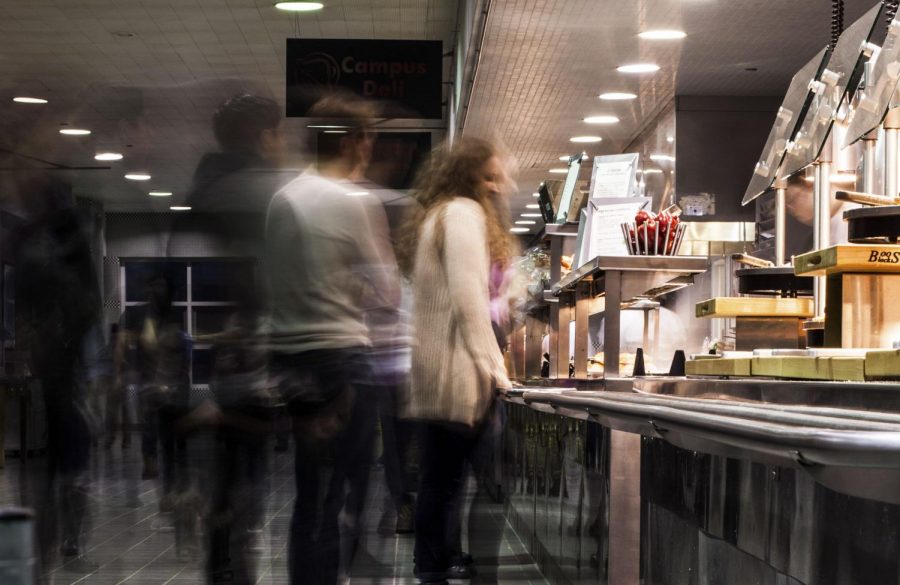 Editor’s Note: The petition and the link to the testimonials mentioned in this article can be found in the Opinions section of The Oberlin Review.

College students are circulating a petition calling on Oberlin’s administration to sever ties with the current dining management company, Bon Appétit, and switch to a self-managed system.

The petition focuses on an array of problems with Bon Appétit, citing the company’s poor management, food waste, and safety issues.

The petition, which has so far acquired over 400 signatures, was compiled with information gathered through the Staff Testimonial Project led by College sophomore Caitlin Kelley. The project consists of interviews with 47 staff members, 42 of whom work for Campus Dining Services, about their experiences working at Oberlin. The interviews were transcribed and have been posted anonymously in a Google Drive folder linked on the petition.

Kelley, who has worked as a dishwasher at Dascomb Dining Hall for the past two years, began the project after the announcement that Dascomb will be closing next semester.

“I never considered myself a petition person,” Kelley said, adding that she created the petition as a way for more students to get involved in advocating for campus workers.

“This project is supposed to be a start to investigating issues on campus,” Kelley said. “One of our goals is that the administration and College support the continuing investigation of these issues, because we don’t claim to know everything that’s going on or everything that’s right or wrong.”

According to Vice President and Dean of Students Meredith Raimondo, the College plans to keep working with Bon Appétit, though it is open to looking into some of the other concerns raised in the testimonials and petition.

“The College engaged an expert consultant to review the dining program this fall,” Raimondo wrote in an email to the Review. “One of the consultant’s recommendations was to continue Oberlin’s partnership with Bon Appétit in order to reach our goal of a high-quality dining program that is both environmentally and financially sustainable.”

However, Kelley and other student leaders have disputed the claims that it is financially advantageous for Oberlin to work with Bon Appétit. According to the petition, “Oberlin pays for all of its equipment, employees, ingredients, and a CDS management fee for Bon Appétit.”

Across the country, 57 percent of college and university dining operations are self-managed, according to a 2015 report by FoodService Director magazine.

In keeping with Raimondo’s assertions, Bon Appétit touts its commitment to environmental sustainability and local food. According to Bon Appétit’s website, its company-wide Farm to Fork program, which was launched in 1999, “aim[s] to strengthen our regional food systems so that everyone in our communities can eat well not just today, but for the future.”

However, some staff report that the company has not followed through with its commitments.

“There’s been absurd food waste,” one CDS worker said. “It’s sickening, though I’ve gotten numb to it over the years.” Another noted that at Stevenson Dining Hall, around three to six gallons of soup are thrown away every evening.

The staff testimonials reveal a stark portrait of the experiences of CDS workers at Oberlin. Many of the staff members interviewed were supportive of the idea of self-management, and the majority disliked Bon Appétit’s managerial style.

“Our relationship with Bon Appétit is horrible,” one interviewee reported. “They keep everything hid from us. It’s like we’re a mushroom, and they keep us in the dirt and they feed us s**t all the time. They don’t tell us the whole truth or give additional explanations.”

“Management has changed big time,” said one CDS worker who is a member of the United Automobile Workers, the international union that represents CDS workers and others on campus. “When I first started, they were like family. They got to know you, they cared about you. You could invite them to your wedding, your baby shower. And they would come. Now it’s like management … during your shift they’ll pretend to care.”

Many CDS workers have a background in food service or are trained chefs, and resent that they are forced to serve food they are not proud of.

One CDS worker who has been working at Oberlin for over 20 years recalled a time when CDS served better quality food.

“We used to have really good food,” they said. “We used to be happy to come into work because we made good food. It’s just an embarrassment for some of the grill cooks working the line at Stevie. Used to be, we were proud to put stuff on the line. Used to be a good product, management used to take input from the cooks. They used to listen.”

Others complained of a lack of training and inexperienced management.

“Never did a manager say, ‘this is how we do things,’” one employee recalled. “I wouldn’t say the manager even knows how to do the stuff and the practices. New managers defer to us ‘cause we’ve been here so long.”

The petition also calls on Bon Appétit and the College to address safety concerns about Stevenson Dining Hall.

“[A] major issue is Stevenson,” Kelley said. “Some staff members call it ‘the big house’ because it looks like a prison, it feels like a prison, and the managers treat them like they’re in prison.”

Many workers reported that the uneven and slip-prone floors are a safety hazard.

“I have had knee replacements because of how much I’ve fallen at Stevenson … Coworkers have gotten spine surgery and hip replacements too,” one CDS worker said. “We all have the ‘Stevenson limp.’ You can tell you work at Stevenson because you limp.”

While the ultimate goal is to push the College to begin self-management, Kelley said that the Student Labor Action Coalition’s short-term goals are to improve worker conditions.

“It’s slightly unrealistic to make that our only measure of success with this project whether or not we end the relationship with Bon Appétit,” Kelley said. She also hopes to focus on holding the management and College accountable for their actions.

Raimondo said that she has begun reading the testimonials, and she intends to read all of them, adding that she appreciates that staff members took the time to tell their stories.

“I am grateful for the incredible hard work of the students and for the employees who shared their stories,” Raimondo wrote. “Storytelling so often helps us understand each other better and recognize both our shared commitments and our challenges to resolve. I am hopeful that hearing the stories of everyone who works in campus dining — workers, managers, temps, and students — can provide a way to build strong relationships and identify shared strategies for our common success.”

Efforts to sever the College from Bon Appétit and improve working conditions for CDS workers have been at the center of student efforts for the past few years. Last May, SLAC organized a one-day boycott of all dining halls, aiming to push out Bon Appétit and initiate self-management.

“One of the broadest things that we’ve been focusing on is changing how the college prioritizes its funds and making sure the rhetoric it uses to kind of describe itself matches its actions,” College senior and SLAC Co-chair Eliza Guinn said.. “The College can say it’s a progressive institution as long as it wants, but if it’s not supporting that with action, then it’s not much.”