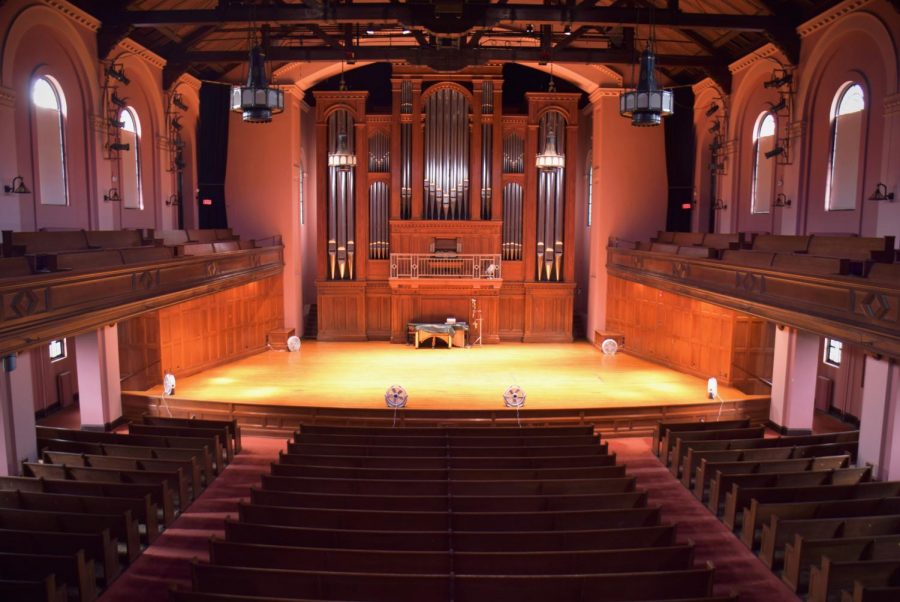 Dean of the Conservatory Andrea Kalyn notified Conservatory staff and students of the accusations and subsequent resignations in an email Aug. 23, stating, “The work of Oberlin College and Conservatory is predicated on the principles of respect, equity, and inclusion; these are core to our daily endeavor and critical to the wellbeing of our community.”

Christie’s case expanded in the nationial news and had drawn worldwide attention.

The email came just days after the Organ Department was notified of Christie’s resignation. The initial email did not include any information as to why the revered professor was leaving unexpectedly.

Within hours of Christie’s resignation announcement, The Boston Globe published an investigation into Christie’s relationship with students at Oberlin and another institution, the College of the Holy Cross, in Worcester, MA, where Christie was a former faculty member. While the accusations regarding behavior at Oberlin were not criminal, those described by the Globe were more severe.

Christie was an influential and powerful member of Oberlin’s Organ Department and the organ world at large. Christie performed as Wellesley’s organist and with the Boston Symphony for decades. He performs nearly 60 times a year — far more frequently than the average organist.

“He was the ultimate teacher,” said Conservatory sophomore Matthew Dion, a former student of Christie’s. “He’s regarded as probably one of the world’s most amazing pedagogues and performers. He did everything.”

“If [Oberlin] is in the top 15 conservatories in the U.S., it’s number one in organ. And in nearly the entire world,” added Conservatory junior Tigran Buniatyan, another former student of Christie’s. Originally from Armenia, Buniatyan is a trained musicologist and was working as a professional organist when he was offered a spot in Christie’s studio. “I left everything to study with him. I never thought I could go study here. I was 25 or 24, and then there’s probably the only person in the world who could just say he’s taking me to his class and I would drop everything.”

Dion said that Christie had a history of blurring crucial boundaries with students, with a reputation for involving himself in almost every aspect of his student’s lives — from music to housing arrangements.

“The thing with Jim [Christie] was he was a teacher, but he was also a friend,” Dion said.

“It was hard to separate the two when he got too involved,” Buniatyan added.

Conservatory students often rely on their mentors to help secure a future in the industry. At Oberlin Conservatory, and in classical music conservatories across the world, students meet with their teacher every week for several hours of individualized attention and small class work.

“In music, you have this person that’s guiding you not just technically, but also teaching you to express yourself,” said double-degree senior and pianist Natasha Gwirceman. “You’re given this instrument and you have to express all the feelings of life and love and passion and sex and death and everything, and this person is there to teach you that when you’re 18. Christie is the best organist in the country. If you study with him, he could make your career. As an undergraduate, this guy could set you up for life.”

For many Conservatory students, it was a struggle to reconcile the professor they knew with the predator depicted in The Boston Globe article and victim accounts.

“The biggest struggle for me over the last two weeks has been to try to separate the man that I knew with the man who did the things that he did,” Dion continued.

Both Dion and Buniatyan expressed frustration over what they see as the destruction of Christie’s legacy in light of the allegations.

“He’s still the greatest organist in the entire [country], I think. People are taking that away from him, but they can’t take that away. It doesn’t have anything to do with anything. I mean, if he’s a great organist, he’s still a great organist,” said Buniatyan

“This guy went from being the greatest teacher in the world to nothing,” Dion added.

Conservatory students often develop a strong bond with their professors and are reliant on their guidance.

“Our work within the Conservatory is particularly dependent on a culture of trust, which is the foundation of every studio and classroom interaction, every ensemble, every artistic and intellectual risk, and certainly every performance,” said Kalyn in a school-wide email.

“As dean, I take most seriously the responsibility to provide our students with a safe and inclusive learning environment, free from harassment and discrimination, as the relationship between student and teacher is a sacred trust that must be honored, protected, and upheld if we are to execute our fundamental educational mission,” Kalyn said.

President Carmen Ambar similarly reinforced these values in an email.

“All of us at Oberlin remain committed to a fair, unbiased, and exhaustive search for the facts,” she wrote. “And we insist that all members of the Oberlin community — especially those who wield power and influence — live up to the highest standards of integrity.”

In light of the allegations, the Conservatory will be requiring all faculty and staff to attend Title IX trainings by fall break.

“All conservatory faculty and staff will have completed required Title IX training by fall break, the Conservatory Division Directors and Conservatory Faculty Council have voted to require that all studio and office windows be unobstructed, and conversations have started about how we can better create a community where professional misconduct does not occur,” Kalyn said.

Oberlin Conservatory, with far more access to Title IX and other support resources than many conservatories because of its connection to the College, is in a unique position to set a precedent for others to follow in the response to allegations of this nature.

The new developments have made some Conservatory students look into the relationship between power and abuse.

“Anytime there’s one individual who can make or break your career,” Gwirceman said, “it seems like the perfect place for [abuse]. You have this very intimate relationship with this person because they are your mentor. They are a god, and they make you as a musician.”