In The Locker Room with Jabari and Malachi Clemons, Teammates and Brothers 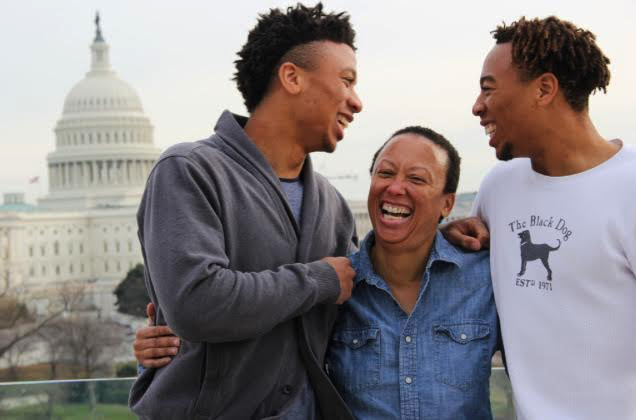 Malachi and Jabari Clemons with their mother.

Growing up, brothers Jabari and Malachi Clemons did everything together, from playing video games in the bedroom to running around the track while their dad timed them. Despite their closeness, neither one expected to be on the same college campus, let alone the same college football team. Jabari, a College senior, is the starting wide receiver after missing his entire junior season due to an ACL injury. Malachi, a second-year, was voted Male Newcomer of the Year by his peers at the 2018 Obie Awards for his accomplishments on the track and football teams. Both are involved in more than just sports, however. Jabari gives tours for prospective students, is an Oberlin Business Scholar, and DJs and produces music in his spare time. Malachi does research and gives tours for the Oberlin Heritage Center as a Bonner Scholar.

What drew you to Oberlin?

Jabari: I had a lot of fun on my overnight visit with the team and the coaching staff at the time. They gave me a good enough reason to come here.

How did Jabari influence your decision to come to Oberlin?

Malachi: He actually didn’t. He didn’t think I was coming here, in fact. My parents actually chose my college — I didn’t choose it. A lot of people would think that’s bad, but there was no college I was really drawn to. When most people visit a college they say, “Oh, I belong here.”

There was no college that really felt like home. I was thinking about going [Division I] for a little while, but I knew that if I did that, I would have to throw away academics. I was like, “OK, that’s not worth it.” I just wanted to go to a place where I could make a difference. That sounds cliché, but my dad just wanted to put me in a place where I could have an impact and [that] feels like home and is just the best place for me.

I made a lot of friendships here fast, and I think that’s the beauty of it being so small. What people don’t tell you is that you’re going to see everyone every day — you see people at their highest and people at their lowest. You find out who really has your back.

How did you get into sports?

M: It started out with track. Our dad made us run. We used to wake up every morning and play video games together, and he would call us lazy.

M: He would force us to go out in the morning for a run. To make sure we did it, he would give us a stopwatch. Before we ran, he would click it.

J: He would know if we ever stopped because he was timing us too with his own stopwatch.

M: He would tell us what time we had to be back by.

J: We would tell him our time and he would tell us his time, and they didn’t always match up. I was 13 and [Malachi] was 11.

M: We started running at this little black track. Jabari was faster than me at the time, so our dad would always make me try and catch him.

How did you get into football?

J: [Malachi] got into it before I did.

M: I finally started watching it. I used to think it was so boring with too many things going on, but then I watched the Steelers play one day and just thought it was very fun and freeing. Whatever I did or [Jabari] did, we did together. If I was playing a sport, he was playing it too.

J: He got me into football, because originally I was into basketball. I loved it and was good at it, but I’m too small and my dad told me I wasn’t tall enough and would get blocked every time I go up for a shot.

Does your relationship change when you are on the field together versus when you go home?

M: People think that we’re distant from each other, but that’s just how we function now. We shared a room with our sister growing up, and Jabari hated it. Since he’s my big brother, I always wanted to be around him. But Jabari loves his space. Living in the same space is tough, because I could always just follow him up there.

J: I had nowhere to hide.

M: It wasn’t until he got older and had a car that he could get away from me. On the football field, though, nothing changes. We’re each other’s biggest supporters. I don’t know if anyone catches this, but any time he makes a big play, I’m always right on the sideline ready to give him a hug. If I make a play, he runs to me to give me a hug.

How has having a brother on campus benefitted you each personally?

M: Jabari is the type of guy where, if you don’t ask, he won’t tell. I knew nothing coming to college, because Jabari never talked about it. I didn’t know what questions to ask him. I knew some guys coming in because of him, but I never had an official visit since nobody ever thought I was going to come here. Jabari never straight up said, “You should come here.” He was relaxed about it all, and I’m shy if I don’t know you, so I really only met two people: Chris Mueller and Khalil Rivers [OC ’18]. But when I came here I started meeting all of [Jabari’s] friends, which was cool.

J: Nothing has changed since high school because essentially it’s the same situation. We’re both at the same school and both on the football team. We’re both the same people we always were. The only difference now is that we don’t have our parents watching over us. So we just look after each other, which we did in high school too.

What is one piece of advice you have for Malachi to make the most of his remaining three seasons?

J: Just have fun. It’s a game. None of it really matters once you graduate. Enjoy your experience. That’s it.

What is one thing you look up to Jabari for that he is unaware of?

M: Growing up, my hero was our dad. Jabari knew that, because I was like Dad’s little soldier. I would do just about anything my dad said. Jabari was always better than me athletically. When we played basketball games, he would always win. But my dad was always giving me tips and helping me out.

But then Jabari started changing a bit in high school without even really realizing it. He became one of those defiant teenagers, and I didn’t understand it. I was in eighth grade and thought he was just acting weird. But then I came here and can see how he’s his own person. I really look up to him for putting his own twist on everything and being so different from what our parents kind of pushed us to do. I love my parents, but I love that [Jabari] goes against the grain. That’s what I strive to be.

Will this season be emotional since it’s your last one together?

M: We actually thought high school was going to be our last time playing together.

J: Yeah, I would guess it’s going to have the same ending as our last time playing together in high school.

M: After high school we thought that we would be traveling down different paths. I was like, “OK, Jabari, this is it. You’re going your way and I’m going my way.” Then we ended up here together, so now it’s just round two. We know what to do now.

I remember that last high school game we played together. We lost by like three [points], and Jabari had his head down. The film guy caught me putting my arm around Jabari as we walked off the field one last time together. My dad isn’t emotional at all — at least not in public — but that last football game was the first time I had ever seen him cry. My mom will for sure cry again this time around. She’s very emotional [in comparison]. This year will be the same for me and Jabari, if not a little more business-like.