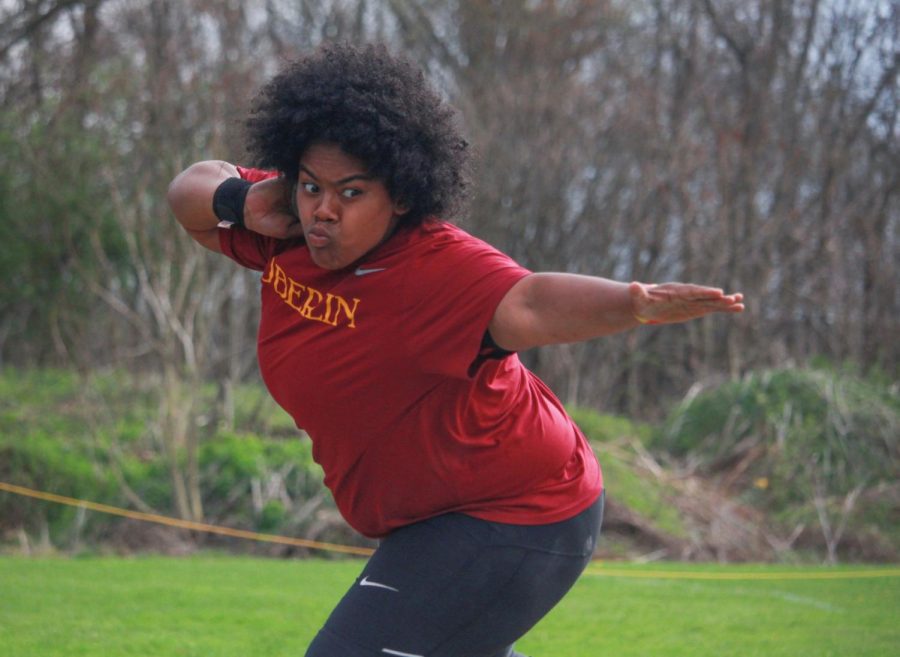 It was four months ago that Lilah Drafts-Johnson, OC ’18, clutched her first-place trophy while being mobbed by teammates and coaches. She had just run the 10th fastest 400-meter hurdle time in the event’s history at the NCAA Division III Women’s Outdoor Track and Field Championships, and could finally call herself a national champion — a promise she made to herself three years earlier.

To the disbelief of many, Drafts-Johnson was not highly recruited as a high school athlete, and she wasn’t immediately accepted into Oberlin — instead, she was waitlisted. Halfway through her first season, she quit the triple jump to join the sprinters in their training, and instantly realized that if she put in the effort, she could set herself up to accomplish lofty goals.

During her second year, Drafts-Johnson took seventh place at nationals in the 400-meter hurdles with a time of 1:02.86 — 3.52 seconds slower than the time that made her a national champion two years later.

One of the fundamental reasons why Drafts-Johnson was so successful as a student and as an athlete — and why many other student-athletes at Oberlin succeed — is because she loved her school, what she was doing, who she was doing it with, and because she was motivated to improve herself every single day.

It takes more than sheer athleticism to become your best self at Oberlin, which is why the cross country and track and field programs have dominated their North Coast Athletic Conference competition and made a statement to the rest of Division III the past several years. Their coaching staff recruits student-athletes who are driven, curious, and passionate in all areas of their lives.

Shortly after arriving at Oberlin, many student-athletes in the program take on leadership positions in a variety of extracurricular activities, pursue interests outside of their sport, and engage themselves in the community. Their college experience does not ride on how they perform on any given day, because they know that their sport isn’t all that defines them.

“If a student-athlete is at a school they enjoy and are getting what they want out of their college experience, they are going to be their best athletic selves,” said Associate Head Cross Country Coach and Assistant Track and Field Coach Izzy Alexander. “The top runners on our team have improved a great deal since high school, in no small part due to them being in a college environment that suits them — an environment [in which] they can thrive.”

In the past decade, a handful of the country’s best cross country and track and field athletes have competed for Oberlin. Joanna Johnson, OC ’11, was a seven-time All-American between the two sports; Carey Lyons, Emma Lehmann, and Kyle Neal, OC ’15, were each two-time All-Americans; Geno Arthur, OC ’16, was a three-time All-American; and, more recently, Monique Newton, Ana Richardson, and Drafts-Johnson, OC ’18, each earned several All-America honors.

“They loved being at Oberlin College, and as a result, that joy, comfort, and reassurance permeated into their successes on the track,” said Associate Head Track and Field Coach and Recruiting Coordinator John Hepp, OC ’07.

A native of Columbus, GA, College junior and All-American thrower Naeisha McClain had never heard of Oberlin before receiving her first phone call from Hepp. According to McClain, Hepp had more to say about the institution itself than the track and field program.

Perhaps Hepp is aware of all that Oberlin has to offer because he was a student-athlete here himself. He won 12 total varsity letters as a member of the football and track and field teams from 2003–2007.

“Our approach to recruiting with the cross country and track and field programs has always been the same,” Hepp said. “We want to recruit student-athletes who, first and foremost, fit Oberlin College. We want to find individuals who not only share and appreciate the things that make Oberlin College the singular and extraordinary institution that it is and has been for 185 years, but who are also passionate about continuing to compete in the sport that they love at the collegiate level.”

McClain hadn’t considered any non-Division I schools until she met Hepp.

“Every single [Division I] campus that I visited and coach that I talked to made me feel like the only interesting part of me was my athletic component,” McClain said. “It was like everybody was trying to parade their huge weight rooms and their huge locker rooms off to me, and then we would go out to a fancy dinner. But for two hours, we would just talk about track. When I visited [Oberlin], [it] was the first time that I sat in a classroom and was taken to academic buildings that interested me. Coach Hepp was recruiting me for athletics, but also made me feel like that was not the only thing that I had to offer.”

According to McClain, Hepp finds what a recruit is interested in and does his best to appeal to those interests. He even attended a high school rendition of Beauty and the Beast last year because a recruit was acting in it.

It becomes especially tough to land a sought-after student-athlete when Division I and II schools entice them with scholarship offers.

“It takes a certain amount of maturity and big-picture perspective for 17- [and] 18-year-old [kids] to understand the benefits of attending a school like Oberlin versus being a face in the crowd at a larger institution where they [might not] continue competing,” Hepp said.

McClain said choosing Oberlin was the best decision she has made and will undoubtedly set her up for success in her post-college life. At Oberlin, McClain has had the chance to be more than just an athlete: she is a village assistant, an assistant student treasurer at the Office of the Student Treasurer, an officer on the Student Athletic Advisory Committee, a board member for the Heisman Club, president of the Class of 2020, a Bonner scholar, and a Mellon Mays fellow.

When people are tempted to write off Division III athletics as mediocre, they should look at what Oberlin’s cross country and track and field programs have done under the leadership of Head Coach Ray Appenheimer. But even more than that, they should acknowledge everything these student-athletes have done and continue to do outside of the athletic facilities.

Student-athletes don’t come to Oberlin with hopes of becoming a professional athlete. They come to Oberlin because they know they are more than just an athlete — they are learners, musicians, artists, environmentalists, humanitarians, and leaders. By spending four years on this campus, they allow themselves to grow in all aspects of their lives, not just athletically.

“For every article or story that is written about achievement in their sport, we are even more proud as a coaching staff about things like Lilah being one of 29 spring sport athletes [across all divisions] awarded an NCAA Postgraduate Scholarship this summer, Monique earning a competitive Coro Fellowship in Public Affairs this year, having Conor Narovec, [OC ’15], in his second year of medical school at Harvard, or seeing Calista Diehl, [OC ’16], earning her Ph.D. at MIT,” Hepp said. “Those achievements are a direct result of students who took full advantage of the resources and opportunities provided at Oberlin, and they have and will continue to have a lasting effect on this program for a long time.”