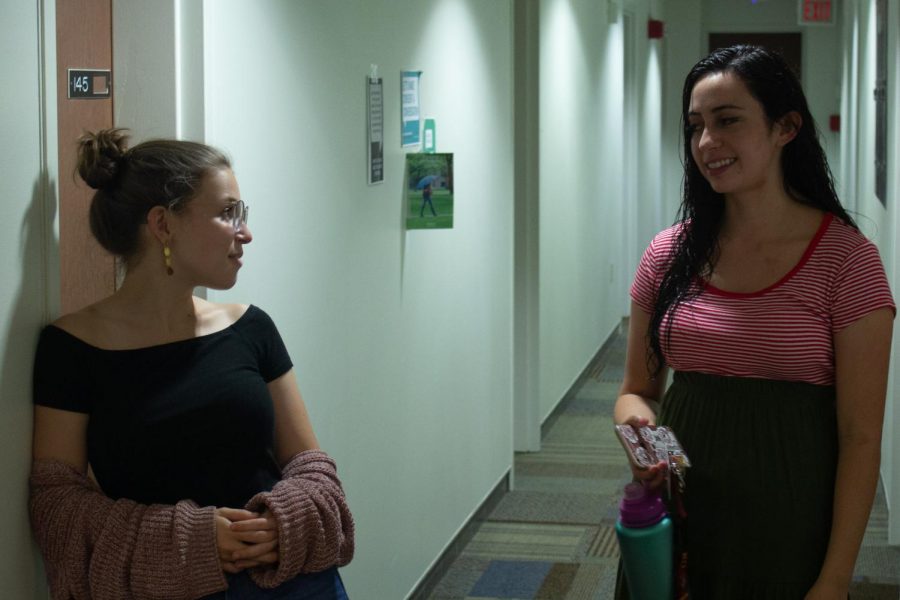 Dual-degree sophomore Corley Friesen-Johnson and Conservatory junior Maggie King hanging out in South Hall. A master key to the dorm went missing toward the end of the Spring 2018 semester.

Editor’s note: Editor-in-Chief Nathan Carpenter is a student staff member for the Office of Residental Education, and was uninvolved with the reporting and editing of this story.

A master key to South Hall, one of Oberlin’s largest traditional housing facilities, has been missing for several months. This key is able to access any room in South Hall, which has a capacity of 220 students.

“The College became aware of a master key being missing toward the end of the [spring] semester,” said Andy Sadouskas, assistant dean.

Residents were not informed about the potential security risk, and the locks have not been changed since the discovery of the missing key. Instead, Oberlin Facilities and Operations simply replaced the key.

“I feel lied and cheated to by ResEd,” said Birsa Chatterjee, a former RA and current South resident. “They do nothing but f**k students over. There is so much wrong with our living situations. It’s not fair for students to pay so much, to live in a building like this, and have them do nothing about the key.” Chatterjee was employed as an RA at the time the master key disappeared.

“I was still in the group chat. We knew the key went missing. The protocol is that all the locks should be changed. I have a lot of valuables in my room and a lot of robberies have already happened in South,” Chatterjee said.

Many South Hall residents are worried about their security and the security of their personal belongings.

“Not being informed is terrifying. Someone could steal something, or hurt me or one of my quad mates,” College sophomore Reet Goraya explained.

“I think it would have been nice to be told about it. If something happened in my room, I would want to know what the first possibility would be,” Conservatory junior Colin Anderson said. “I will be more secure about where I put things in my room.”

“Some people keep necessary medications in their rooms. If someone has a key like that, that medication could be taken from someone who really needs it,” said College junior Connor Swan.

Other South Hall residents feel that the disappearance of the key is not a pressing threat to their safety.

“If someone has it, it could be bad. I feel pretty safe around here, but it may scare other people,” first-year Nico Moreta said.

“I do not care. I lock my door, but there are so many other rooms in this building,” said College senior Eliot Sernau.

EmmaLia Marriner, a College senior and lead RA of the FEAST cluster, which includes Fairchild House, East Hall, South Hall, and Talcott Hall, believes that ResEd recognizes both the importance of security on campus and the costs of obtaining security.

“I know that they [Residential Education Staff] really prioritize security on campus. They are always looking for ways to increase security on campus, whether that be ID swipes, keys for rooms, things like that. It is a major concern for campus. However, those kinds of materials are very expensive. So they always have to weigh the benefits of security and the somewhat incredible costs of paying for that security. With a master key lost, there is no way to know if someone has that key or if they ever want to use it malevolently. But the cost is incredible; You have to justify what kind of risk losing a master key like that poses and if it justifies the cost.”

Facilities did not provide an estimate of the cost involved in changing the locks in South Hall. However, the Office of Residential Education Housing and Dining Regulations details that students will be charged “at least $60 per lock change.” There are nearly 150 rooms in South Hall.

Andy Sadouskas assured that the College will continue to pursue precautions to enhance security.

“The College is always looking for ways to improve processes. We will be making requests to purchase new key boxes with either ‘trap keys’ or card access so we know who is accessing master keys. We will also advocate for replacing all keyed spaces with keyless locks as keyless cards can be shut off if lost.”

The whereabouts of the master key remain unknown. No new locks have been installed, but an additional key has been created to replace the misplaced one.