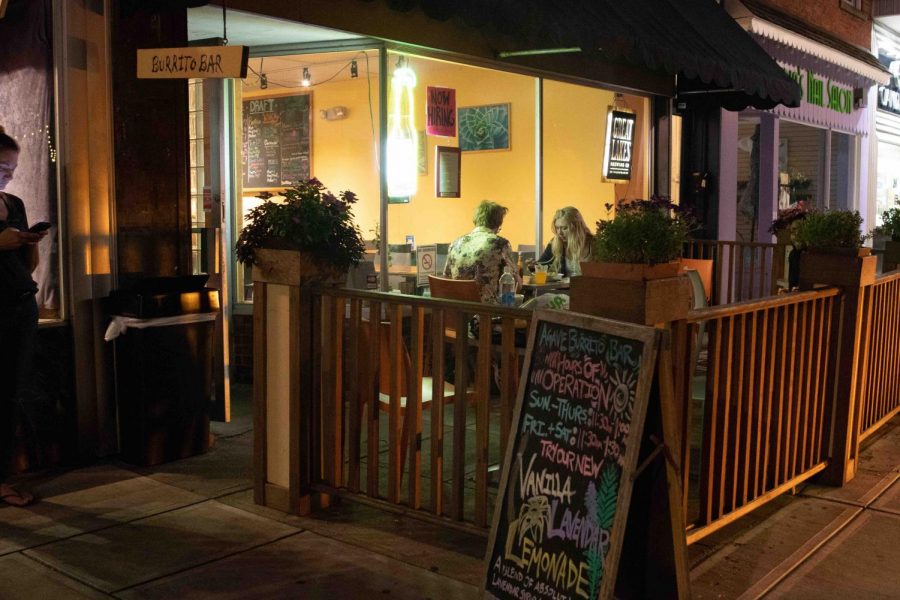 An anonymous male called the Oberlin Police Department on Friday to report a group of people in the alley between Agave and Lorenzo’s the night of the incident, claiming he suspected the group of dealing drugs. Chapman advised OPD to dispatch two police units, both of which arrived at the scene before 11 p.m with a K-9 unit. Chapman was the only officer who entered Agave.

According to Agave manager Mee-ae Chatman-Nelson, shift leader and bartender Galen Mackay-Bentoff, and a cashier who will be referred to as Maggie, Chapman told Chatman-Nelson that Agave “should be more selective about their clientele.” At that time, there were approximately 15 Black people and three white people, including staff, in the restaurant.

“I really felt it was racial profiling,” customer and community member Mykal Isom said. “How can you have any say on any business that’s making money from all races at the end of the day?” Isom was one of the customers who questioned what Chapman meant by his statement about clientele. Mackay-Bentoff and Maggie claim Chapman attempted to justify his comment by gesturing toward a Black customer and suggesting he knows him from his criminal record.

“[Chapman] kept saying [the customer’s] name. He kept repeating, ‘How do you think I know that name?’” Maggie said. Mackay-Bentoff believes Chapman tried to agitate the man he questioned, and claims Chapman accused him of selling drugs.

One point of tension during the event was a bottle of Crown Royal found outside Agave. Officers Raymond C. Feuerstein and Bashshar H. Wiley were the two officers who made contact with people sitting on back steps of Agave, where they found the opened bottle.

By law, customers are not allowed to take drinks outside of the restaurant. Regarding the drink, Agave management has since adopted a plan where kitchen staff complete routine checks in the dining room. According to Chatman-Nelson, Chapman discovered the opened bottle that Feuerstein and Wiley found, and then warned her and Maggie about the restaurant’s liquor license.

“He was walking out, but he was still scolding us, telling us that the police don’t care about what happens, but that liquor control does,” Chatman-Nelson said. “And so he was saying that he didn’t really care about what was going on, but that if they came in here that we would get our license taken.”

“As he was walking out, [Chatman-Nelson and I] said we would consider his advice, and then he turns around and goes, ‘It wasn’t advice,’” Maggie said.

Chatman-Nelson and Maggie were the main staff who claimed they de-escalated the situation. Chapman first spoke to manager Chatman-Nelson when he advised staff against their clientele. Chapman left after speaking to Maggie and Chatman-Nelson together. Maggie, who was off-duty at the time, believes Chapman listened to her because she is white.

Chatman-Nelson, Mackay-Bentoff, and Maggie, as well as at least two customers, believe Chapman’s actions toward customers were racially motivated. One customer believes Chapman has a history of racial discrimination.

“Officer Chapman has made a very, very bad mark in this town with minorities in general. But also anybody that doesn’t look privileged, Caucasian — he will definitely give you problems,” said a long-term Agave customer, wishing to remain anonymous for security reasons.

According to OPD Lieutenant Michael McCloskey, the department has asked Sgts. Patrick Durica and Melissa Lett to implement an anti-bias training program for all officers. While the trainers have been prepared, training sessions have yet to begin. Individual OPD officers have completed anti-bias trainings in the past, but under no mandate.

“In most cases, [anti-biastrainings] have been elective,” McCloskey said. Once completed, the program will focus on internal bias and racial intelligence.

McCloskey added that the OPD has a very strict policy against racial profiling.

“Racial or bias based policing practices are expressly prohibited by department policy,” he said. “It’s important to our community policing efforts to build trust, so that the police and community work in an effective partnership to solve problems. In that effort, we strive to serve the community and to enforce the law equally, fairly, and without discrimination toward and individual or group.”

Two squad cars arrived at the parking lot behind Agave on Friday, but Chapman was the only officer to enter any establishment, and he only entered Agave. McCloskey claims Chapman’s entrance into the restaurant followed protocol.

“When an officer is on foot patrol, they’re generally on their own,” McCloskey said.

Agave does not own the parking lot behind the restaurant where the reported group of people was gathered. Chapman was inside Agave for approximately 10 minutes before leaving and did not enter any other establishment on West College Street. Maggie believes it was discriminatory for Chapman to only enter Agave in response to the call.

“People think, ‘If it was in the parking lot, it was probably Agave,’” Maggie said. “To some people, this is where the ‘wrong crowd’ is.”

Police have been called to Agave in the past. According to Maggie, staff have called OPD for assistance with a particular customer, but there was no action taken by the department. As for the incident Friday, there has been talk among staff about filing a complaint with the police department. According to McCloskey, no official complaint has been filed. One of Chatman-Nelson’s main worries about the incident last Friday is the effect on Agave’s customers.

“I mean, [Agave is] like the one place that many Black folks … can really come through, especially because it’s central to both bars in town,” Chatman-Nelson said.

The restaurant has been a staple of downtown Oberlin for 20 years. Mackay-Benton believes that what happened Friday is relevant to all businesses that neighbor Agave.

“I think other business owners should know about this. I feel like the people in our little block should know this is happening,” she said.

Sgt. Chapman was unavailable for comment due to a two-week vacation planned prior to the incident.