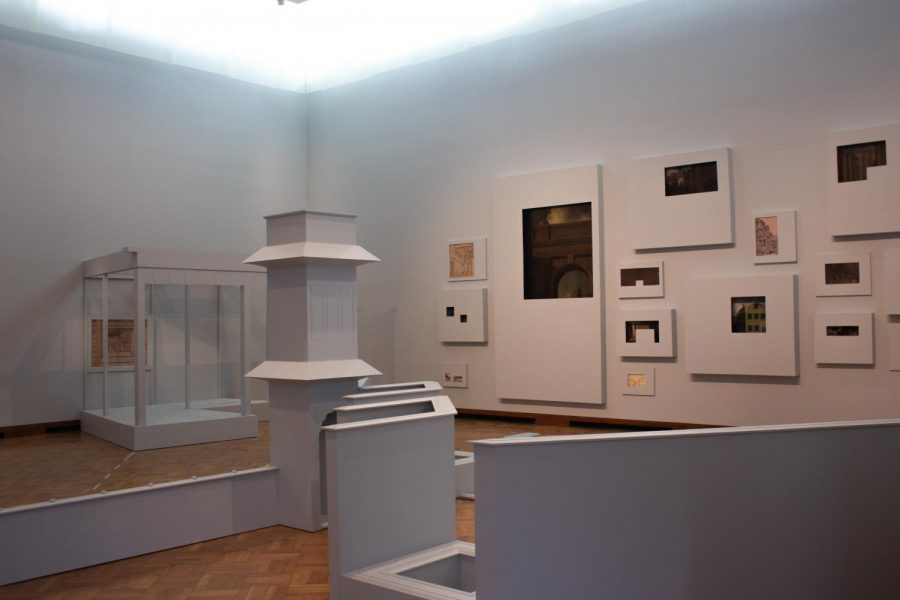 FRONT International: Cleveland Triennial for Contemporary Art presented its first group of internationally acclaimed artists and their equally diverse art earlier this summer. From July 14 to Sept. 30, over 100 chosen artists will display their works at selected locations around Cleveland.

Exhibition venues are not confined to spaces dedicated to the presentation of art alone, but rather transcend the traditional walls of galleries and museums into the streets of Cleveland and beyond.

For instance, the United States’ first-ever indoor shopping center, The Arcade in Cleveland, boasts an abstract mural by Julian Stanczak that balances softness with geometric rigidity. The Cleveland Clinic houses a photography installation by artist Sharon Lockhart that highlights the humanity of young Polish women. St. John’s Episcopal Church houses an exhibit that grapples with the public’s historical consciousness of the Underground Railroad.

The wide range of venues is reflective of the diversity of subjects touched upon by the artists represented at FRONT. This year’s theme is “An American City: Eleven Cultural Exercises.” Each artist was asked to incorporate some aspect of the city and its architecture into their work. They have developed exhibitions that range from pointed political commentary through images to abstract painting and outdoor sculpture.

The founder of FRONT, Frank Bidwell, modeled the event after its prominent European predecessors, including the Venice Biennale and the German festival Documenta. The Venice Biennale, like FRONT, attracts artists from every corner of the globe to present politically-charged pieces in an urban setting. Both events scatter the installations and exhibits around the city, allowing onlookers to either explore the city in search of the art, or to stumble upon new art in their own neighborhood.

While Venice is a utopia of picturesque landscapes, the city of Cleveland holds a very different place in the hearts of the public. It is often viewed only as a dismal remnant of Rust Belt industrialization, characterized by crumbling buildings, abandoned factories, and failing infrastructure.

However, through initiatives such as the Bonner Center’s Connect Cleveland program as well as FRONT, members of the Oberlin community have seen a side of Cleveland that defies those stereotypes.

With FRONT, Bidwell aims to shed light upon the culturally diverse community of Cleveland that is so often ignored. Bidwell hopes that the festival will help revitalize the city and the surrounding area, not only with the predicted $50 million of economic impact, but culturally as well. Bidwell wants to shift perceptions of Cleveland from a city of declining industry to a hub of art, culture, and opportunity.

At the Allen, New York artist Barbara Bloom took on the task of curating an exhibition using pieces already existing in its collection, displaying architectural forms ranging from a rough sketch of a house reminiscent of a children’s drawing to traditional paintings of ancient buildings. She drew upon the architectural elements of the gallery space in the Allen in the presentation of the selected pieces by encasing them in white boxes with the only visual access being small window-like cutouts. College first-year Emma James described the space as “white and minimal.”

Andrea Gyorody, the Ellen Johnson ’33 assistant curator of modern and contemporary art at the Allen, described Bloom’s artistic approach in the exhibition as “a strategy she has employed before.”

Gyorody further described Bloom’s projects as being “about her particular vision and getting you as the viewer to be clued in to what that vision is.” Bloom’s approach to presentation invites the viewer to appreciate both the art and the space that it inhabits, much like FRONT as a whole.

Shanghai-based artist Cui Jie presents her first solo work in the United States at the Richard D. Baron ’64 Art Gallery. The pieces consist of a combination of paintings, drawings, and sculptures whose subjects revolve around political criticism of the socialist elements of the former Mao regime, and incorporate architectural quotes. Gyorody describes Jie’s work as “her personal experience walking through the city of Beijing, and trying to understand it from the point of view of walking around these buildings and experiencing the space.”

By including an exhibition that features such frank political criticism of China’s political history, FRONT secures its place as a boundary-pushing artistic festival.

At the Frank Lloyd Wright Weltzheimer/Johnson House, Portugal-based artist Juan Araujo created paintings that are displayed on both the interior and exterior of the mid-century era building. The exhibition, titled Redwood, draws inspiration from the physical and historical aspects of the building, such as the colors and the materials, as well as the art collection of the home’s previous resident, former Oberlin Professor of Art History Ellen Johnson, OC ’33.

Gyorody described the “desire [of FRONT] to have an artist who is interested in modernist architecture paired with a modernist home. [Araujo] had never done anything with a Frank Lloyd Wright house before, so it was an opportunity for him to stretch in a different direction and apply what he does primarily with Latin American modernist architecture to a North American example.”

Another Oberlin professor, Johnny Coleman, is one of the featured artists of FRONT. His work focuses on the community of Glenville, a Cleveland neighborhood, and is comprised of three pieces: a sound installation at an old community church, a sound piece in a stairwell, and a telescope facing Glenville (both of the latter are located at the Cleveland Museum of Contemporary Art).

In an email to the Review, Coleman described his sound piece, “Bonita Wagner Johnson, world-class Gospel vocalist and Glenville resident, climbs each of the four levels of the staircase singing the classic, “Move On Up A Little Higher.” Between each iteration of the verse, the recorded voice of an elder reflects upon their experiences within the community over the span of their lives. The sound of a human heartbeat and the soft lapping of Lake Erie on the shore are layered below the sung-spoken voices.”

Coleman’s connection to Oberlin further reiterates Oberlin’s role in revitalizing the art scene of Cleveland. With FRONT, Bidwell is pushing against what people have long thought about Cleveland and Northeast Ohio. Hosting multiple shows and bringing internationally acclaimed artists to a small college town is a serious achievement, and Oberlin should view its involvement in such a prestigious arts festival with pride.