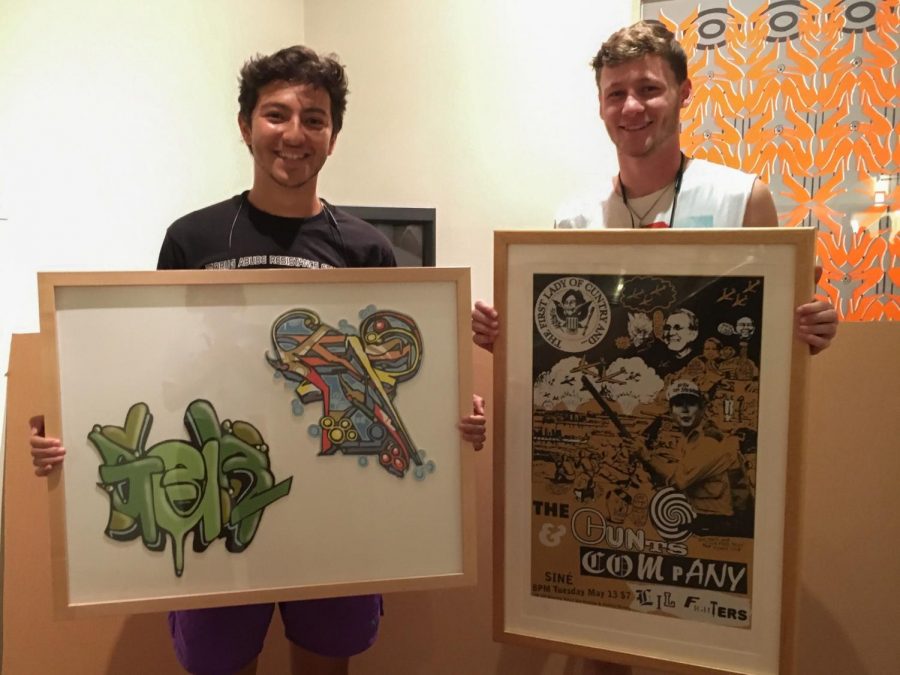 College seniors Brian James and Moses Riley hold their rented pieces, the last two available, from this year’s Art Rental event. Students who participate in one of Oberlin’s most noteworthy traditions can rent up to two pieces of art for the entire semester.

Many students were discouraged from participating in the annual Art Rental at the Allen Memorial Art Museum last Saturday when the sign-up list was posted several days earlier than usual.

“I think it was annoying that it was put up so early, but the conventions around the whole system are so fuzzy. Since it’s so casually student-run, itdoesn’t surprise me that someone did this,” College junior Della Copes-Finke said. She and her roommate decided not to attend Art Rental this year after being enthusiastic participants in the past.

Oberlin promotes Art Rental as a major selling point to prospectiåve students, as it’s one of the only programs of its kind in the country. Founded in 1940 by Professor of Modern Art Ellen Johnson, OC ’33, the program consists of 388 pieces that are available every semester for students to rent, at the cost of five dollars per piece.

There is a limit of two works per person, and Art Rental happens on a first-come, first-serve basis. Though it always takes place on a Saturday, the sign-up list traditionally goes up Friday morning.Some students even camp out overnight on Thursday in order to be among the first to write their names on the list.

The Allen staff have nothing to do with the organization of Art Rental — they just put out the art for students to look through. The students who post the list are in charge of the entire production. Since there is a tradition of posting late Thursday night or Friday morning, students who camp out Thursday night do so hoping to secure a top spot on the list — usually, these students get a Picasso, Dalí, or a piece by a similarly well-known artist. Students who come later must sign up on this same list and tend to get lesser-known works.

This year, however, the list was posted on Wednesday morning. Since this was out of the ordinary, many students who had participated in the past missed signing up and weren’t aware of the posting until the list was already disappointingly long.

“I didn’t even know when Art Rental was. I only found out afterwards,” said College sophomore Mara Delta, who wanted to participate this year but was not able to. The program started at 8 a.m. and sold out by 10 a.m., the earliest in the event’s history.

“I didn’t know [the list] was going up early. I saw it [while] heading to class and put my name down,” said College senior and art history major Ashley Grauman, who participated for the first time this semester. “It was cool; I did it with my roommates and we got a good spot on the list, so we got some good art.” Though happy with her experience, she mentioned that she had friends who chose not to participate because they were discouraged after finding out that the list was put up early.

The early list-posting wasn’t the only change to the Art Rental process this semester. On Thursday night, there was a costume contest, where students competed for places 8, 9, and 10 in line. Shifting places in line in this manner is also out of the ordinary for Art Rental.

The College describes Art Rental as “one of Oberlin’s most cherished traditions.” Undoubtedly, this sentiment holds true. However, after this semester’s Art Rental, it’s safe to say that some traditions are subject to change.