A Little Bit is Better Than None: Teaching Self-Care in Ella Causer’s ExCo, “How to Be David Sedaris Himself” 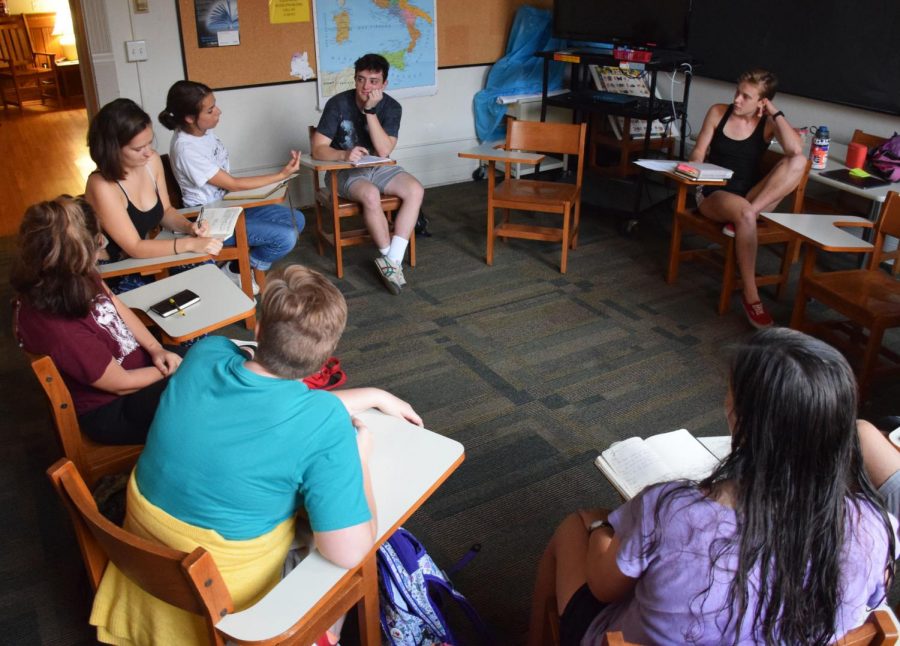 A love of barn owls shared with a well-known humorist led College sophomore Ella Causer to develop and teach the ExCo “How to Be David Sedaris Himself.”

“He’s one of the authors that can make me laugh out loud,” said Causer. She became exposed to Sedaris’ work relatively recently and has developed a strong appreciation for it. Causer once sent Sedaris fan mail, and he responded by complimenting the collage she’d sent along with her letter, as well as providing her with a list of authors to read. Her admiration of Sedaris has only grown since, culminating in the development of her ExCo.

Sedaris, a bestselling author known for his reliably hilarious storytelling abilities, delivered Oberlin’s commencement address this past May. His speech, poignant in some places and brash in others, certainly left an impact on the audience.

“When it comes to scented candles, you really need to watch it,” Sedaris said during his speech. He also offered the simple advice to “Be yourself. Unless yourself is an asshole.” His ability to balance frank honesty with lighthearted humor when writing and speaking about his own life is a quality Causer hopes to channel and share in her class.

The ExCo focuses on Sedaris’ writing style and aims to provide a comfortable space for students to try and apply the techniques to their own writing. Causer hopes that her class will encourage healthy self-care techniques like journaling, which Sedaris does quite a bit of.

Causer wants to drive home that we are worth the effort of caring for ourselves — a sentiment she learned from Sedaris and hopes to share with others. Students in the class are expected to journal with the intention to positively impact themselves and others. Causer envisions the journals as a tool for self-care; students in the class can work through their own experiences and challenges or simply use them in moments of creative inspiration.

She is also invested in creating a tight-knit community, which she plans to do by facilitating writing workshops where students feel comfortable sharing their work.

“Another thing we’ll be focusing on is physical maintenance,” Causer said. “I noticed that David Sedaris has very strong calves, so we’re going to be doing calf raises at the beginning of each class.”

So far, her students seem to love it.

“I had never heard of David Sedaris before the ExCo fair,” first-year Gwen Gemmell said in an email to the Review. “I thought that Ella’s way of explaining the class was so compelling, so I decided to take it!”

Causer’s insistence on treating yourself well through journaling is admirable. She doesn’t focus on having a “good” product or being particularly funny. Instead, she is committed to helping her students find forms of reflection and self-expression that work for them.

Causer, who has never taught before, has enjoyed the beginning of her class and is eager to continuing sharing David Sedaris’ wisdom and wit. Above all, Causer encourages her students to write for themselves and not others, and to embrace and be proud of their work. In the words of David Sedaris himself, “There’s a lot to be said for not getting it out there.”