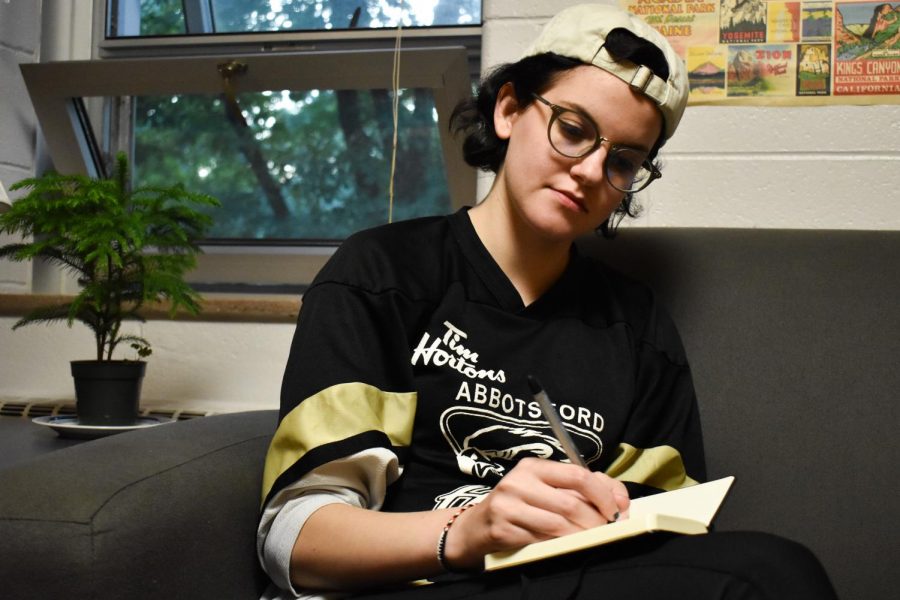 Conservatory senior Zoe Heuser writes in her diary. She is one of the many students who read their inner thoughts aloud during last Friday’s Diary Reading Open Mic at the Cat in the Cream.

Brave students recited their diary entries aloud to the audience of the Cat in the Cream at the Diary Reading Open Mic last Friday night. The excerpts could be from any time period in their life. Some entries were funny, others emotional; still others were deeply poetic or revealing. Each one was a window into how exactly self-reflection works when we don’t particularly believe anyone will see.

This is an excerpt of a diary entry from my junior year of high school: I got seated next to my crush at a school assembly and wrote two and a half pages about it in my diary, even though he didn’t even talk to me. He also unfriended me on Facebook after graduation!

Today we had the Junior College Symposium, which is the event where juniors are infamously yelled at and told that they will not make it into any college. So we were all really looking forward to it. The best part was that we had to miss class for it — 3rd and 4th periods. Which I was super stoked about — as you know, those are my two periods with Hunty (my high school crush was named Hunter, but I fondly referred to him as “Hunty” in my mind). So, I had our third lab of the week in Chem, my free period, then into the auditorium. I found the group and started to sit with them, but then I realized I stole Linny’s (my best friend!) seat. By the time I realized, all the other seats in the row were taken. I felt bad, so I let Linny have her seat back, and was redirected by Mrs. Fanning to the empty seats in the earlier rows. The line of students in front of me who had also been redirected grew shorter; we moved closer and closer to the first row of seats. Soon there’s only two people left in front of me, and we’re at the front row with only three seats left there. So Megan and Izzy, who were in front of me, took the two seats on the very end of the first row, so I took the last seat left. It was next to Hunty. What is this luck? What do these coincidences mean? Why?! He looked up, and he seemed surprised, but in a happy sort of way, and he said, “Hey.” I cannot remember whether I replied or not, I was honestly just in total shock. The symposium ran for 2 hours — TWO HOURS, yes — that I got to just sit next to him. After it ended, I said “well, that wasn’t so bad,” directed towards him, but he just left. So I shrugged and went to Euro.

I have since edited it, but I wrote the original version of this journal entry in the mountains of Northern California, where I have spent a portion of every year of my life. I was about to embark for Colorado to spend the rest of the summer in a new place, doing something I had never done with people I had never met before. To say the least, I was nervous. The day I wrote this, I felt deeply grateful for the journey that is my life and had some important revelations which I hope to carry with me always .

I went down to the water again and felt a great wonder and thankfulness for life because it is so beautiful and magical and there is so much to do and learn and explore and I felt this way in particular for my life because not everyone is able to do what I can do. I have been so incredibly fortunate to be born into my life, my family, my community, my body. I have two legs that can carry me and hop from rock to rock. I have two parents who offer unconditional love and support. I have a mind that can think, and the things it can think! Eons of time, generations of coincidences, countless seconds and events have conspired to bring me here, to this moment, next to this river, so completely and unbelievably free — can someone get any luckier? “I am free!” I said out loud and repeated it until I began to believe it. Free to be whoever and do whatever I’d like. Free! It is my mind that makes me free; my mind, my body and my unbelievable fortune. And what an incredible way to be.

When I went home this summer, I found a box of old journals from my elementary school years. I wrote this story, which is heavily autobiographical, when I was 10, and when I found it over the summer I showed it to everyone I knew for a week. The original copy is around 15 pages long, and it foreshadows so much of my life to come — my parents’ divorce, my sexual awakening. It’s [fascinating how intuitive young kids can be. Anyway, when I heard about the open mic, I knew I had to read it — it’s so funny and has so many good one-liners.

My mom is a horse freak. I love horses too, but never as much as her. Anyways, my name is Preston. I know, it’s a boy’s name. As far as I know, NO popular girls have boy’s names. But that’s okay. I’m 10 years old, and I’m pretty popular in school, but my name isn’t helping. I talk back, I don’t stand up straight, and NEVER in my life would I EVER have a crush on a BOY. Or ANYONE. Although … I sort of like my BFF Natalee. But don’t EVER tell ANYONE that or you’ll suffer the consequences! I mean it!

My mom is making me do the English Classics Horse Show, but I want to ride Western. She likes me doing English because its “sophisticated.” I’ve got three words for you: BLAH BLAH BLAH. So there. That’s my life.

I was very proud of myself. I had been practicing hard all summer. Then, finally, the first day of school came. I made it to the bus stop just in time, and plopped down next to Natalee, my absolute BFF since Kindergarten. We got to school and walked into homeroom where we were greeted by a too-smiley woman with brown hair.

“I’m Miss Kelly, your homeroom teacher. This is going to be such a fun year! I hope you’re as excited as I am, because I love teaching sixth grade! We’re going to get along great!”

Umm … second grade much? This was going to be a LONG year.

After school, I got off the bus and walked into my house. I yelled, “Hey mom, I’m home!”

She responded: “Go to the stairs, Preston, and sit there for ten minutes. I will not tolerate being shrieked at!”

Oh my gosh. Really? Cause last time I checked, time outs were for babies, and I called, not shrieked. I stomped over to the stairs and luckily found my GameBoy lying at the top. I was being quiet … om never said anything about a GameBoy being quiet.

“Why do I hear beeping noises?”

“I dunno, maybe it’s your imagination.”

“Don’t you talk to me like that! It’s your GameBoy! I want you to sit there and think about what you’ve done.”

“Jeez. Who knew mothers could be so uptight?” I said under my breath.

“You know what Preston, you cannot back talk like that. No riding for two weeks,” she said.

The next day, after school, I was supposed to ride, but of course I couldn’t. So I took my saddle up to my room and put it on a saddle rack. I mounted on top, adjusted the position, and pretended to ride, moving my hips back and forth. It actually felt like riding, because after a couple of hours of it, I was sore. My muscles tightened, but it didn’t feel so bad.

Anyway, this is the story of my life. Ugh. My whole family is so paranoid. I mean, who names their child after a boy and won’t let them ride their own horse? See? My life is mixed up and wrong.