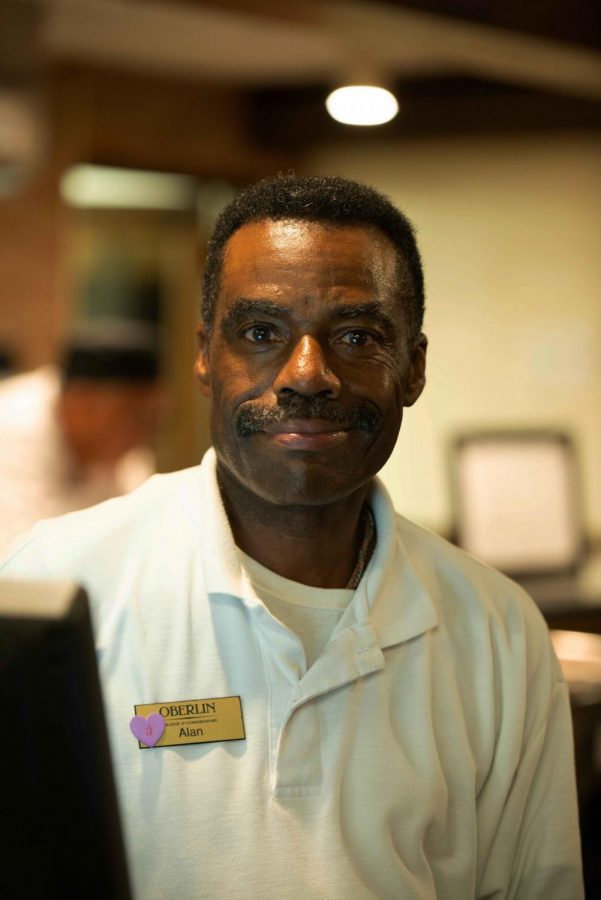 Alan Jones, 56, is a Campus Dining Services employee who works as a cashier and server at Oberlin’s Fourth Meal from 10–11:30 p.m. in the Rathskeller. Better known as “DJ Al,” Jones is known around campus for his catchy playlists and welcoming attitude. For many students, Jones is a staple of Oberlin’s dining scene. Jones is from Lorain, Ohio, and has been working at Oberlin on and off for years. Last year, he had the opportunity to appear on Wheel of Fortune during the show’s Veterans Week. He spends his summers and early spring umpiring for Little League and youth baseball.

How long have you been working at Fourth Meal?

Now let’s see … I kind of forgot; it’s been four years, maybe five years, maybe six years. When I came out here we was at [Dascomb Dining Hall] at the time. And, when I came out here, I didn’t know I was gonna get into it. I never did anything like this before in my life, so I just needed a little extra money to help supplement.

And Fourth Meal, it had music, but it was just dull, man. So we changed all that. I started talking with the kids and playing with them and dancing, and then making the line happy and stuff. And that’s how Fourth Meal went to the next level.

I worked for a couple years [as a temporary worker] and left, and then got hired again as a 20-hour worker. As far as that, basically when it came to Fourth Meal, they didn’t have to worry ’cause they knew [they] had someone they could trust to keep everything going as far as that. I love you guys — y’all keep me young.

What’s your experience in working at Fourth Meal and meeting students?

My experience with Fourth Meal has been wonderful. I love to hear the kids say that I make their day or that “I only come in for Fourth Meal because I know you’re gonna be here, and I’m having a bad day and it’s gonna be much brighter.” And there’s no greater feeling than hearing something like that. I’m here to give an hour and a half of enjoyment and relaxation. Y’all study enough. Y’all put all that in, but when y’all come to Fourth Meal, y’all here to kick it. When y’all come to Fourth Meal, y’all here to relax and enjoy. And then y’all go back to that craziness. I’ve been through a couple graduations — my first class, I definitely went ’cause we had been together through the whole time and stuff.

So you went to Commencement?

[Yeah, it’s] been a couple years since then, and that was my first one I went to. That was my class — they came in with me and so it was beautiful. So I plan to go if I can. ’Cause there’s always another class graduating and they’re like, “You coming? You coming?” Yes! I try to catch their events, too. You know somebody’s doing something. But like I said, this is like my second half, my second home.

How do you choose what playlist you’re gonna play during Fourth Meal?

OK well, there’s certain things I like to do. So Monday I like a little light rock, a little classic rock. Tuesdays I leave open. We don’t have steady set-up with the food right now so still trying to figure that out. Wednesday it’s Pink Floyd. Then it’s always funk Thursday, it’s always my day. I like to play a mix on Sunday. I’m old school, I love music though! So that’s what I do.

Can you tell me a little bit about yourself outside of Oberlin? Where are you from?

I’m from down the road here. I’m from Lorain. I lost my wife a couple years ago in July — July 15 or 16, and that was a big change. That kind of changed me a little bit.

And then this past December, I had surgery, so I was out — I was away from y’all for awhile. So that’s why people were glad when I came back. But I got through all that. I lost four angels that year. I lost my wife, my mom, my two aunts all in a matter of two years. For almost a full two years, I went through a lot of sorrow.

But through that I managed to pick up another lady — another angel in my life — which is cool and stuff — and I still got you guys. When it first happened, coming here was a saving grace. ’Cause going home was a little rough — being alone was a little rough, so coming in here really, really made my day a lot better. And I told the kids that y’all keep me going and stuff. Other than that, I’m a serviceman. I was in the Air Force from ’80 to ’84; I was on Wheel of Fortune. It was for Veterans Week.

Can you tell me about that?

That was great! That was actually last year. They started the end of ’16. Yeah, they had a tryout, and I went to the Cleveland tryout finals. I didn’t make it, but in the meantime, [I was put] into the veterans pool. In August of last year, I got a call. And it was from the lady of Wheel of Fortune, and she said, “I left you an email; we want you to come be on the show.”

They told me in August. They said the taping was gonna be on Sept. 13. “Sony Studios, in LA. Be there.” They don’t pay for anything — you have to provide your own way. They give you a time and a place and a date. So, I said, “Yep, I’m coming. I don’t know how I’m doing it yet, but I’m coming.” ’Cause I had no clue. I had no clue. And plus, I was going through my sickness back then, so, really not doing well.

But God is so good. A guy at work, him and his family, they took care of everything. They wanted to do something ’cause of me being who I am and after what I went through. You know, with my wife and everything. … They booked the plane, they booked the car rental, they booked me at the hotel, and everything. They said, “Do not even try to pay us back,” ’cause the only thing they wanted [me] to do is go and have a good time. [It was] a once-in-a-lifetime experience. It was on my bucket list. It’s off the list now.

What do you enjoy doing with your time off, around here?

I’m a big Cleveland fan, so I love the Browns, [the Cleveland baseball team], Cavs, and Ohio State. In the summer, I’m an umpire. I umpire from May through the end of July or August. Youth, high school, that’s my other love — I’m really good at it. Back in the day, I used to do all the high school and college games back in the day in the ’90s. But once I changed jobs, I couldn’t do the high school no more. I was off for a while, but I got hooked back at the end of the summer. And I miss it. I’m glad I’m back now. So that’s my thing I do when I’m not with y’all. Y’all get me through ’til the summer when I’m umpiring. [And that] takes me ’til I get back to hanging out with you guys!