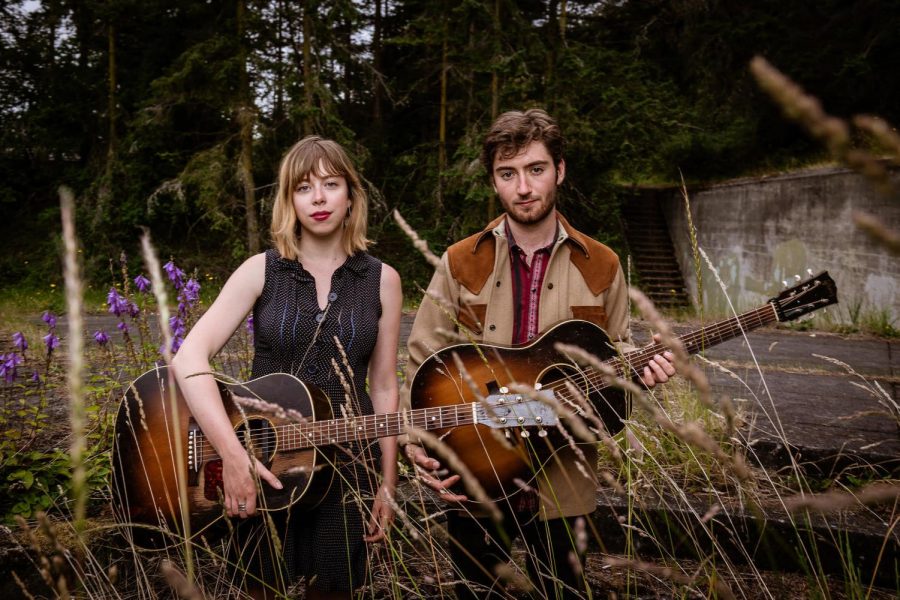 College junior Riley Calcagno and duet partner Vivian Leva performed at Riverdog last Saturday. The folk music duo each took a semester off this past academic year to go on tour and develop new music.

It’s not often that Oberlin students venture off campus for music, despite the multitude of local performances happening almost every day. Saturday, though, College junior Riley Calcagno and partner Vivian Leva made a surprise appearance at Riverdog, a quaint outdoor venue a few miles outside campus.

Established only five years ago, Riverdog has hosted local and traveling Americana artists, welcoming folksy and acoustic performances. It has a large light-strung canopy, extending above the tables and enhancing the familiar and welcoming atmosphere. It is built around a 150-year-old barn, often packed with regulars and first-time audience members alike. Its stage not only hosts performers, but also houses dogs that silently wander about the venue, weaving between the chairs.

“For me, it’s just exciting that people are coming out to listen and enjoy live folk and traditional music they might not always hear,” Calcagno said.

The age range at the show was interesting as well — older audience members outnumbered students.

“It’s a cool combination for the turnout, because this concert venue has a built-in audience, so there’s people [who] trust that they will bring in good music,” Leva added.

“What I found was a rustic, down-to-earth place, emphasizing artistic talent, a relaxing atmosphere and a lack of commercialism for a performance venue,” Terry Parker wrote in a review on Riverdog’s website. “Things are done simply, yet incredibly well. It’s all about visual and musical art, and restorative simplicity.”

These elements provide the basis for a relaxing night out in the countryside that performers can make their own.

The duo fit perfectly there. They performed traditional folk music and songs from Leva’s new album, Time is Everything, which gained attention from major publications upon its release in March.

Leva, a student at Lewis & Clark College, solidified her style at a young age and continues to experiment and be influenced by multiple genres.

“The new album I came out with is before I met Riley,” Leva said. “All the songs on that are my songs that I wrote from being fourteen through nineteen, except for one that we co-wrote with our friend [College senior] Sam Bailey.”

Calcagno and Leva were humble and genuine on-stage. Calcagno cracked jokes to buy time while tuning, while Leva smiled and rolled her eyes — one can guess she’s heard them all before. They have an intimate musical dynamic, almost leaning on a sixth sense to know how to share space in a song. Leva provided the melody and rhythmic chords, while Calcagno weaved around her on the fiddle, guitar, and banjo. It was a pleasure to see how Calcagno worked his way through Leva’s compositions, and this balance was executed brilliantly throughout the performance. “You can hear the confidence,” double-degree senior Camie Vogley-Howes, a friend of Calcagno, pointed out. “He’s really grown into himself as a musician and a person.”

Leva and Calcagno’s roots shaped their sound, and their dynamic came about naturally when bonding at a folk music camp in Fort Townsend, WA.

“I was teaching the next week at a fiddle week, and we ended up playing tunes all night and just hanging out and gradually started playing music together,” Calcagno said. “It started out as an excuse to just hang out and get to play with each other, and it kind of ended up turning into something else when we took a semester off [from] school and traveled all over.”

While their work sounds similar to traditional folk music, Leva pointed out, “We differ from that because we use that as inspiration and create new music.”

In their performance, there was no noticeable straying from the genre, and their consistency left audience members clapping along and tapping their feet to even more somber tunes.

The duo’s authenticity behind their work is ever-present.

“There’s something about old-time music and country music that’s very genuine and authentic and just an honest sharing of emotions,” Leva added. “I think regardless of what else we are listening to, that’s our main goal — to be direct.”

Leva and Calcagno plan on picking up shows on their breaks from school and putting together a collaborative album. It’s refreshing to see artists work together purely for the sake of creating music.

“We’re kind of trying to get an excuse to get together to hang out and play music together,” Calcagno said.