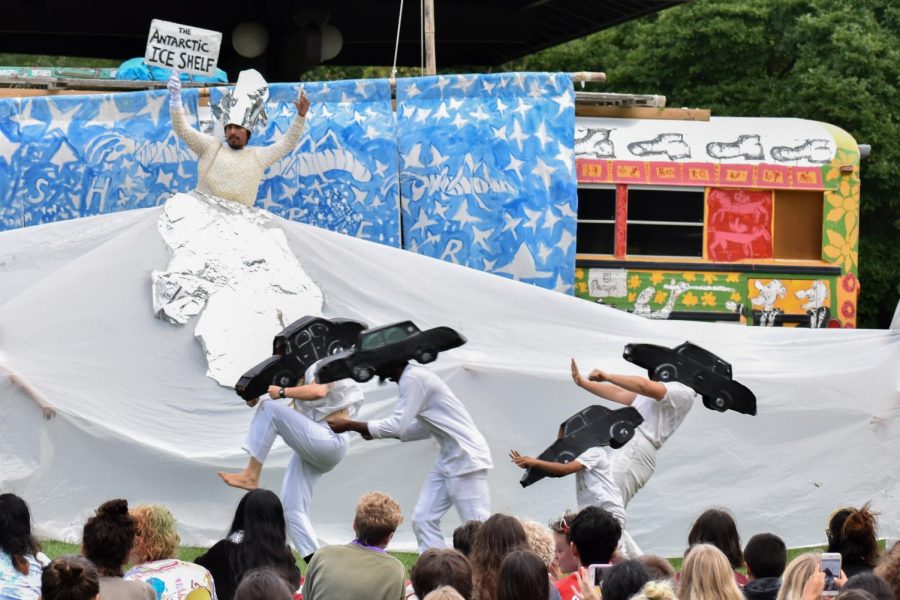 Puppeteers from the Bread and Puppet Theater enact a scene as part of their political activism performance in the Grasshopper Rebellion Circus. The group performed at the Clark Bandstand in Tappan Square Tuesday afternoon.

The historic political theater group Bread and Puppet Theater performed The Grasshopper Rebellion Circus in Tappan Square as part of their nationwide tour on a chilly fall day last Tuesday.

This unique, immersive theater experience uses costumes and large papier-mâché puppets to distill relevant political issues into both entertaining and radical statements. Some of the issues covered include unethical labor practices in India, ICE and Trump’s “Zero Tolerance Policy,” Puerto Rican victims of Hurricane Maria, and the Second Amendment.

“The theater has started off with the understanding that any work made in public is inherently political,” said Aleksandra Bragozstewska, a Bread and Puppet puppeteer currently working for the Glover, VT, company. “The fact that you agreed to perform for an audience is political.”

Bread and Puppet Theater is a political puppetry theater that has been in operation for over 50 years. Each year, the theater company attracts artists from all over the world to their summer apprenticeship program. Program participants receive training in the art of puppet making and performance during an intensive five week period. In addition to its nationwide tour, there are Bread and Puppet companies traveling in locales such as Austria, France, and soon, South Korea.

“It’s a self-sustaining theater, so we do not solicit any governmental or grant funding,” Bragozstewska said. “Whatever audiences put into our hats at the end of the show is what keeps the theater running.”

According to their website, The Grasshopper Rebellion Circus, is a “celebration of 6,000 years of human revolution against human management.”

“I enjoyed how the performance balanced moments of laughter and silence as the performers alternated between comedic antics and reminders of current events,” Conservatory junior Franco Ortiz said in an email to the Review.

There were also “Possibilitarians,” who would arrive at the scene to show a more peaceful possibility in the midst of disaster. In a show that had the potential to be weighed down by its morose topics, Bread and Puppet maintained an uplifting, hopeful tone. A band comprised of a violin, flute, accordion, drum set, tuba, and trumpet, accompanied the action. The style was reminiscent of Neutral Milk Hotel, like indie rock without the vocals. After the show, bread and aioli was served.

The main attraction of the performance was the papier-mâché puppets that artistically demonstrate divisive and emotional political issues. While the topics were often difficult, the puppets and bite-sized scenes make the issues accessible to a wide audience. In addition to the students in attendance, local families with children enjoyed the free outdoor theater.

“It was relevant and not too preachy and one of the best shows I’ve seen them do,” Isak Saaf, OC ’18, said in an email to the Review.

Aside from mirroring the political activism for which Oberlin is notorious, Bread and Puppet Theater has a direct Oberlin connection. Julie Taymor, OC ’74, apprenticed at the theater during her time as a student. This experience would lead her to direct The Lion King on Broadway with ground-breaking puppetry, and her 2007 film Across the Universe also references the Bread and Puppet Theater. Amidst a wide variety of entertainment options, this kind of radical performance art upholds its relevance and eccentric flair in a way that feels right at home in Oberlin.

“Bread and Puppet uses a radical art form to both lighten and deepen our conversations around what is happening in the world,” event organizers and College seniors Emma Doyle and Hannah Tishkoff said in a joint email statement to the Review. “Through their art, the theater is able to confront complex and difficult issues in a way that makes us laugh and makes us feel full — which is where the bread comes in.”