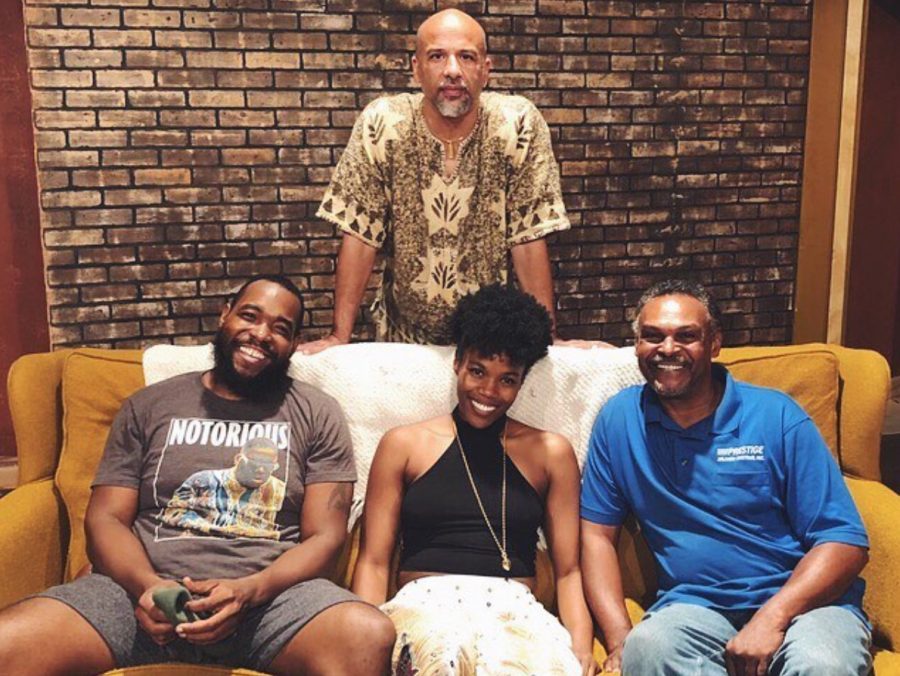 Associate Professor of Theater and Africana Studies Justin Emeka, top, is the director of Sunset Baby.

A group of Oberlin students and faculty traveled to the Dobama Theatre in Cleveland to see the premiere of Sunset Baby Friday, Sept. 7. The play, which will continue to run through this weekend, was directed by Associate Professor of Theater and Africana Studies Justin Emeka, OC ’95. Emeka worked alongside College juniors Miyah Byers and Jaris Owens, along with other Oberlin affiliates.

Sunset Baby follows the story of Nina, a fiercely independent woman who is caught in a moment of contention with her boyfriend and estranged father. The play explores the characters’ struggles with emotional vulnerability, generational differences, and the nature of liberation. Nina’s boyfriend, Damon, wants to move away with Nina and leave their street hustle behind. Nina’s father, Kenyatta, is a former Black Liberation movement revolutionary who wants to connect with Nina and preserve the memory of her late mother. The play follows Nina’s journey as she contends with these two forces.

In an email to the Review, Emeka explained his approach to the deeply flawed characters in this play: “I want the audience to love each of [the characters] while witnessing their painful shortcomings.”

“I thought this production gave even more life and depth to characters that were already pretty fully dimensional on the page,” said Leonard. “[Emeka and the actors] made some interesting choices to make [the characters] all really fully human and sympathetic people.”

Both Leonard and College junior Dylan Purvis read the play in Theater of the Millennium, taught by Professor of Theater and Africana Studies Caroline Jackson-Smith, before going to see the production.

“Contrary to what I would’ve expected, there were still surprises,” said Purvis. “You think you know what’s going to happen from reading it, but they add so much more and they bring it on stage. … The moment that didn’t hit me as hard when I was reading it was Kenyatta not being able to say ‘I love you.’ That carried way more weight.”

Emeka was able to translate the drama evocatively from script to stage, captivating audiences and winning their sympathies.

“Black people and the stories we have to tell aren’t given many platforms in the world of theater, or the broader arts and entertainment industry as a whole,”said Byers in an email to the Review. “As a collective society, we are not taught to identify with Blackness, not in life and thus not even when we see it on stage. I think the best theater works to challenge this reality.”

The audience’s emotional investment helped them draw connections between the experiences of the characters in the play and those of real-life people. Emeka was inspired by the play’s narrative of the Black Liberation movement and the impact that Kenyatta’s activism had on his personal life.

“I want to allow people to confront the emotional toll of the Black Liberation movement,” Emeka said in an email to the Review. “We often romanticize the heroism of liberation figures like Malcolm X, Huey Newton, Angela Davis, and Assata Shakur — and other revolutionary leaders, many of whom were imprisoned at one point because of their involvement with the movement. We don’t think about the toll their commitment takes on their family — their sons and daughters, brothers and sisters, fathers and mothers. Though they become heroes to a nation, their absence at home can do irreparable harm to the legacy of their family.”

Playwright Dominique Morriseau wrote the songs of Nina Simone into the script, adding a musical and historical element to the show. Emeka expanded upon her idea with video projections that played during the scene transitions. The words and images of Tupac Shakur and other influential figures grounded the drama of the play in the real world and highlighted the story’s thematic relevance.

“One of the big choices I made was to incorporate multimedia projections and video clips as a way to show the convergence of past movements with the present,” Emeka said. “In addition to hearing Nina Simone’s music, I wanted to hear her voice in interviews as well. Ms. Morisseau dedicates the play in part to Tupac — his story really informs Nina’s backstory, so I really wanted to hear his voice by showing interviews with him. So often we glamorize Tupac as a pop icon, yet little of us know that his mother was a Black Panther. He was really a child of the liberation movement.”

“For me, the most striking part of the play is how the struggles of the past still continue to persist today,” he said.