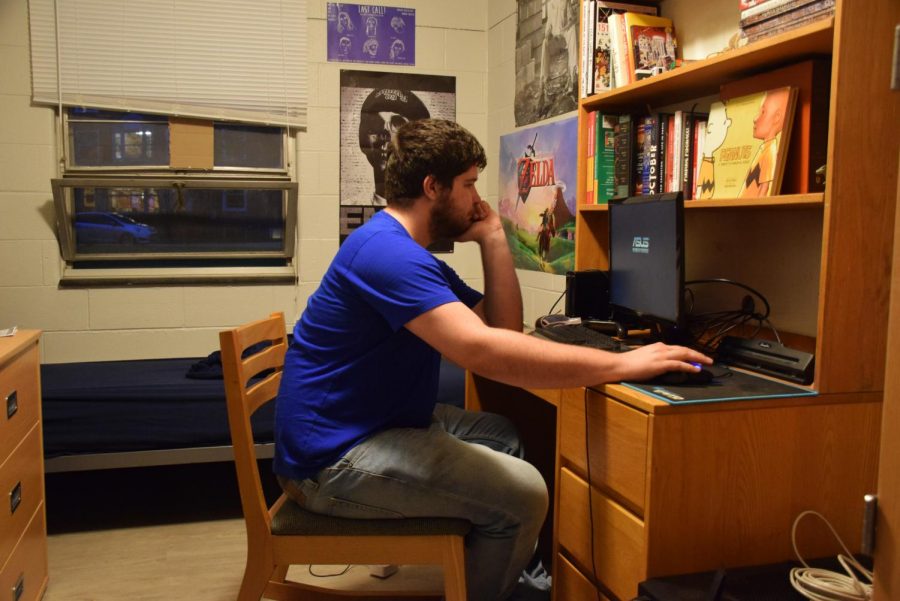 College sophomore James Dryden sits in his Langston Hall dorm room. Langston and other dorms experienced a string of thefts in recent weeks.

Oberlin resident Que Freeman, 20, was arrested by members of the Oberlin Police Department and charged with three counts of receiving stolen property, a fifth-degree felony, on Sunday, Sept. 23. Over a three-to-five-day period, Freeman allegedly broke into Harkness House and Langston Hall and removed student property including two laptops, Beats headphones, a debit card, and various other Apple products.

Freeman was apprehended after College sophomore Kyra Aviles returned to her Langston single around 12:40 p.m. Sunday afternoon and discovered her MacBook Air laptop was missing. Aviles had left the room around 11:30 a.m. and had left her door unlocked.

Aviles used her iPhone’s tracking feature to locate her laptop and realized it was on the move near Tappan Square and the Bibbins Conservatory building, at which point Aviles contacted Campus Safety and the Oberlin Police Department.

When OPD apprehended Freeman, he had two computers in his backpack — one that matched Aviles’ description, and a red MacBook Pro laptop that was consistent with a police report filed by College junior Puma Guerrero Thursday, Sept. 20.

Guerrero’s laptop was stolen from Harkness House along with a wallet containing a debit card. Officers recovered Guerrero’s debit card as well as other electronics and charging devices in the bag. Each laptop was valued at more than $1,500, which surpasses the $950 minimum for a felony charge of receiving stolen property.

Freeman also had possession of a student ID card that he had used for at least three days to enter campus dorms. The ID was missing for a total of five days and was never deactivated or reported missing. At this point, it is unclear how Freeman acquired the ID.

Aviles described how the intrusion has made her fear for her safety and wellbeing.

“I don’t feel safe at all sleeping in my room,” she said. “The past two nights I have been crying, freaked out about it. The thought of someone coming into my personal space with all of my stuff. Not even the thought of someone taking anything, just the idea that someone I didn’t know was in my room. And in this day and age in security, I don’t understand how this could happen. And I know it’s not the school’s fault that someone didn’t report their ID missing or lost. But the fact that he was able to get into the building is terrifying.”

For some students, it took time for the magnitude of the break-ins to set in.

“At first it was funny, and then I realized I kind of live here,” said College first-year Maddie Zapour, a resident of Langston Hall. “I lock my door, and I didn’t know there was a problem until there was an email. It’s kind of creepy.”

The news was released publicly Monday night in an email from Oberlin’s Office of Campus Safety. In an unusual move, the email included Freeman’s mugshots and a photo of him entering Langston.

“I’m always reluctant to post someone’s face on an alert because I figure you’re innocent until proven guilty,” Martinsen said. “But in this situation, he continues to violate and ignore our ban. He continues to prey on our students.”

Freeman has been on Oberlin College’s no-trespass list since March 27, 2017, after he was caught using Oberlin’s facilities multiple times without authorization. The first incident occurred March 9, 2017, when a student reported that Freeman was eating in Fairchild co-op as neither a student nor a paying co-op member.

Although that was the first official complaint filed with Campus Safety regarding Freeman, he had lived illicitly in a Fairchild House dorm room with another student, Daniel Gonzales, for four months. Gonzales’ roommate was “ghosting” their room, meaning that the roommate was technically registered in to the room, but was living elsewhere.

“It was hard, because I believe he was on [Campus Safety’s] no-trespass list,” Gonzales said. “And it was difficult because he was born and raised in Oberlin, and Oberlin College and Conservatory campus make up a significant amount of downtown Oberlin. And so a lot of places were deemed off-limits to him in a place he’d lived his entire life. I thought that was pretty screwed up and I tried to have compassion for him, and we started spending a lot of time together. “

Gonzales and Freeman became friends in 2016, while Freeman was a student at Oberlin High School and an employee at Gibson’s Bakery. The two connected over music and proceeded to create a number of songs on the audio distribution platform Soundcloud. Freeman moved into Gonzales’ room in Fairchild House spring 2017. According to Gonzales, Freeman was kicked out of his home when he graduated high school.

“At that time, Que was in kind of a tough spot,” Gonzales said. “He’d been kicked out of his parents’ house and had recently graduated from Oberlin High School. But for a period of time, he didn’t have very many resources. So … when I was dining in Harkness, I would invite him to come eat with me. … He came to some of our meals and did a crew [shift] a couple of times.”

Martinsen acknowledged the good intentions behind such invitations but reinforced the priority of student safety.

“This individual, in particular, became a threat to our campus community because he was able to prey on our students’ kindheartedness, and our students’ willingness and desire to help someone in need,” Martinsen said. “It’s challenging for us as a campus community because as important as it is to reach out and help someone in need, we ask that you don’t place a stranger’s safety above your own safety and the safety of your roommates. Because you just don’t know who you’re inviting in.”

A second incident was filed with the Office of Safety and Security on March 15, 2017, when Freeman was found sleeping in the Harkness lounge. He was found in the lounge again March 16, 2017, at which point he was reported to the Oberlin Police Department and detained on charges of trespassing, a fourth-degree misdemeanor.

Freeman pled guilty to the charges at the Oberlin Municipal Court and was put on five years probation. He was charged a $350 fine, including court fees.

College senior Chantal Anavian, one of Harkness’s Housing Loose Ends Coordinator — the Oberlin Student Cooperative Association equivalent of a Residential Assistant — said that she doesn’t believe anyone intentionally let Freeman into the building.

“To our knowledge, no one in Harkness housing or dining knew the non-student responsible for the thefts, and no one let him into our building,” Anavian said.

Martinsen said that many problems arise from students holding doors for others when entering residence halls, a polite gesture that can have larger consequences. He added that students should be more mindful of locking doors to their dorm rooms.

“I really strongly encourage students to lock your residence hall room door when you leave — even if it’s just to use the bathroom,” he said. “Because if someone is there and has the intention to steal, it’s very easy to sit in a lounge and watch, and it only takes a second.”

Freedman had a hearing at the Oberlin Municipal Court last Wednesday, at which point his case was transferred to a Lorain County grand jury. He was released on bond Wednesday.