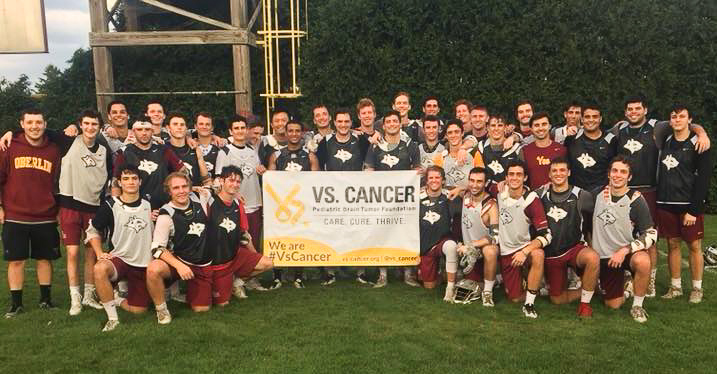 Oberlin Men’s Lacrosse Head Coach Topher Grossman has always believed in the importance of giving back. Most collegiate athletic teams, at Oberlin and elsewhere, may partner with a local non-profit throughout their season, or maybe play an “awareness game” or two, where baked goods are sold for medical research. The men’s lacrosse team, however, has taken its philanthropic goals a step further and partnered with University Hospital Rainbow Babies, a local branch of the Pediatric Brain Tumor Foundation in Cleveland.

“It’s so important to help others and give back,” Grossman said. “At some point in time, everyone needs help in some way, shape, or form.”

The idea for the philanthropic partnership was born when Grossman ran into an old coaching friend at a recruiting camp a few months back who had stepped away from a long-time career in coaching to work for the Pediatric Brain Tumor Foundation full-time.

The foundation, which has been around since 1991 and has raised more than $30 million, directs its mission toward “increasing survivorship, improving quality of life, and helping survivors and families thrive.” Providing free services for pediatric brain tumor families, the foundation serves the ten of thousands of U.S. youth battling brain tumors through the investment of research and by providing practical, informational and emotional support to families.

“I asked him how we could get involved when I saw him over the summer,” Grossman said. He and the team took it from there. In just a matter of weeks, the team was hitting the four-digit mark on their online fundraising page, and as of Oct. 3, the Yeomen had more than doubled their fundraising goal of $2,500, clocking in with $5,557 total.

“The majority of the team has raised lots of money for the cause,” said College sophomore Max McAllister, who also noted the generosity of donations from friends and family members of teammates. “Our coaches have been very persistent in making sure we have as many people as possible working towards this communal goal.”

The partnership with UH Rainbow Babies is not the men’s lacrosse team’s first brush with philanthropic and community engagement; fundraising and volunteer work have been major aspects of the team’s mission for a long time. Last year, the players participated in a partnership with Oberlin’s Langston Middle School, where they spent time with and mentored kids, particularly through sports and outdoor activities during the recess period. “This was a lot of fun,” McAllister said, “and it gave us a real chance to connect with some community members outside the College.”

Grossman sees the team’s involvement with UH Rainbow Babies, and charity work in general, as nothing less than their responsibility.

“It’s a privilege to get the opportunity to study, compete, and work at Oberlin College, and someone helped us get to where we are,” Grossman said. “In my opinion, that’s a debt that can only truly be paid back by helping someone else.”

The team hopes to continue their support for the UH Rainbow Babies and the Pediatric Brain Tumor Foundation. Coach Grossman expressed his interest in utilizing the team’s creativity to expand fundraising efforts. “We want to go beyond the traditional ‘asks’ to friends and family,” Grossman said.

This cause hits close to home for many Yeomen on the lacrosse team, who, according to McAllister, have had numerous friends and family members who have been affected by cancer in some way or another. Although they haven’t taken a trip to Cleveland yet, the team will soon have the opportunity to spend the day touring the facilities at University Hospital and meet some of the kids and families they raised money for.

“We haven’t been able to visit them yet,” McAllister said, “but it will be lovely … when we get to let them know how strong they are and that we’re fighting for them.”