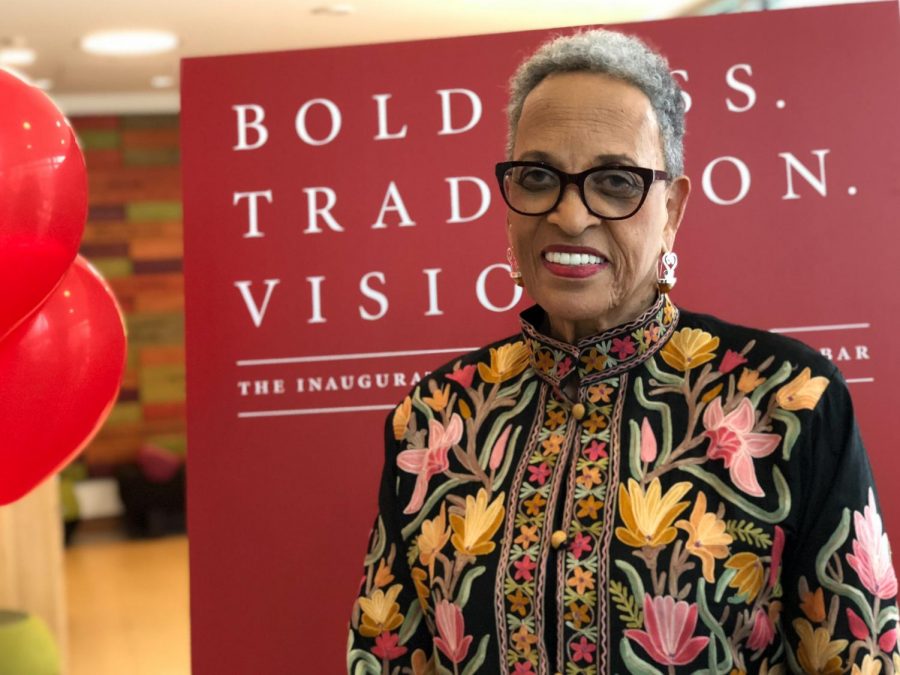 Oberlin alumna Johnnetta Cole, ’57, delivered the opening remarks at the Inauguration Ceremony of President Carmen Twillie Ambar earlier today. Cole was the first female African-American president at Spelman College and also served as the President of Bennett College. She has been the director of the Smithsonian Institution’s National Museum of African Art and was awarded the Legend in Leadership Award for Higher Education from the Yale Chief Executive Leadership Institute earlier this year. She is a dedicated leader and a committed educator.

So you talked about Oberlin being an intellectual home for you. Can you elaborate on that for me?

Well, you know, in many ways I dream of the day when everyone feels at home almost everywhere. That would mean that all of these deeply-etched divisions that exist now among us based on, you know, these attributes that should not matter in that way — race, gender and gender identity, and sexual orientation, and I could go on — all a part of systems of inequality. They divide us, and they say this can be your place or your home, but you can’t be here. This is reserved for us. When I came here, Oberlin became another home for me. Not that I had not known of a very special warm, nurturing southern Black family and community, but I had also known the dominant narrative that said, “You’re Black, you’re colored, you’re Negro, you’re whatever, and you can’t be as good as us.” In the days when I came to Oberlin, this place was the end of that. This is one of my homes. I have, in a sense three intellectual homes. As a young 15-year-old girl, I was sent off to Fisk University in an early entrance program. My parents, they believed in education like the devil believes in sin. So I never finished high school. I went to Fisk. It was a great year.

What advice would you have for current students about how they can accept difference?

How can you be passionate about your own identity, your own community, and yet be respectful of others? I’m prepared to say that is one of the critical questions of today. I mean listen to the rhetoric, which unfortunately now also has policies behind it, right? I’m prepared to move further and say [that] when one has experienced the intensity of oppression beginning within slavery, through reconstruction, through Jim Crow, through the civil rights movement, when you have experienced all of that, it’s not hard to understand that one seeks comfort and safety in one’s own community. And then one can become intensely passionate about one’s own community, and the danger that you and I are bringing up is if passion becomes so intense that it may begin to say, ‘Only I and those exactly like me can belong here.’

Inaugurations are as inwardly celebratory as they are opportunities for the College to tell its own story. What is the Oberlin story today in your opinion?

This is no ordinary inauguration. Look at the history, the meaning,  her story, and the current reality of Oberlin College. I don’t have to convince you that we were the first college that saw co-education as a necessity right from the very beginning. Nor do I have to convince you that we were the first college to admit African Americans. The first to admit students regardless of race. So race and gender have been so central in our history and her story. Can you imagine how those abolitionists, especially how Mary J. Terrell, Mary Jane Patterson, and Augusta Savage, are jumping for joy when they will witness, looking from glory, the inauguration of the first African-American woman to be the president of this institution! When I was with sister president, as I call her, I said to her, “You know, sister, President Carmen, if you want to use biblical terms, you are our Esther. You are our leader for such a time as this, a time when there is such divisiveness, this coming from the highest places of authority and power saying that based on these attributes, race, gender, sexual orientation, class, religion, abilities, [and] disabilities should keep us apart.” Here is a woman whose own multiple identities as woman, as African American, and so much more is a walking statement of how we need to celebrate and respect difference.

As the first African American woman president of Spelman College, what does this inauguration mean to you?

I have such sisterly love, admiration, and respect for Carmen Twillie Ambar. But I have to be honest, if even at the risk of exposing my inner emotion, I am looking at her and I am seeing a younger me. You know, in 1987 at a place called Spelman College, one of the historically Black colleges for women, as I prepared my remarks, I couldn’t help and reminisce about my own inauguration and what that meant. And I have to be honest and say what that meant in terms of its historical significance, but also the responsibility placed on someone who is a first. It’s an unusually demanding responsibility. And I am so convinced that she will bear it in an exceptionally sterling and successful way.

Leadership, at its core, is a collaborative process. There’s an African proverb that says, “One who is moving ahead as a leader with no one with him or her is not leading. That person is taking a walk.” There’s another African proverb that says, “If you want to go fast, go alone. If you want to go far, go together.” So that’s the first thing for me. Now the day comes, the moment comes, the hour comes and you gotta make a decision. But it ought to be based on listening and hearing all that is around you. Secondly, I think that leadership fundamentally has got to be etched in passion for the mission of that organization, that college, that healthcare system, that whatever. Because without passion for the institution, why are you involved with it? Thirdly, I really believe that good heaping doses of humility will go a long way for a leader, and I’ve always believed that you cannot lead where you will not go. You should not be asking others to do what you, yourself are not willing to do.

Oh, I love that question. You know, I’m going to go with something that just struck me. I may well have answered that question quite differently, but right now my answer is first and foremost [to] practice human empathy. Now I’m an Obie, so I know our traditions of activism. I know our traditions if we do not feel that a president is listening to us. I respect Oberlin activism. I respect it especially these days, when there’s so much we need to do to change the ways of our communities, our nation, and our world. But if you want to support your president, I ask that you first imagine yourself as sister president, Carmen Twillie Ambar. I really think that at some point, we’ve got to figure out how we begin to better understand each other.

How do you think a college president should engage with student activists?

It’s very easy for me to sit here now and pontificate because I’m not in that seat. I feel very deeply that the time to engage with students around issues and social activism is not when the social activism is at the boiling point. A president, I think, builds relationships with students so that when there are points of disagreement, there’s at least some common ground that has already been established, but I don’t want to minimize these times. These are unusually troubling times on our college campus.