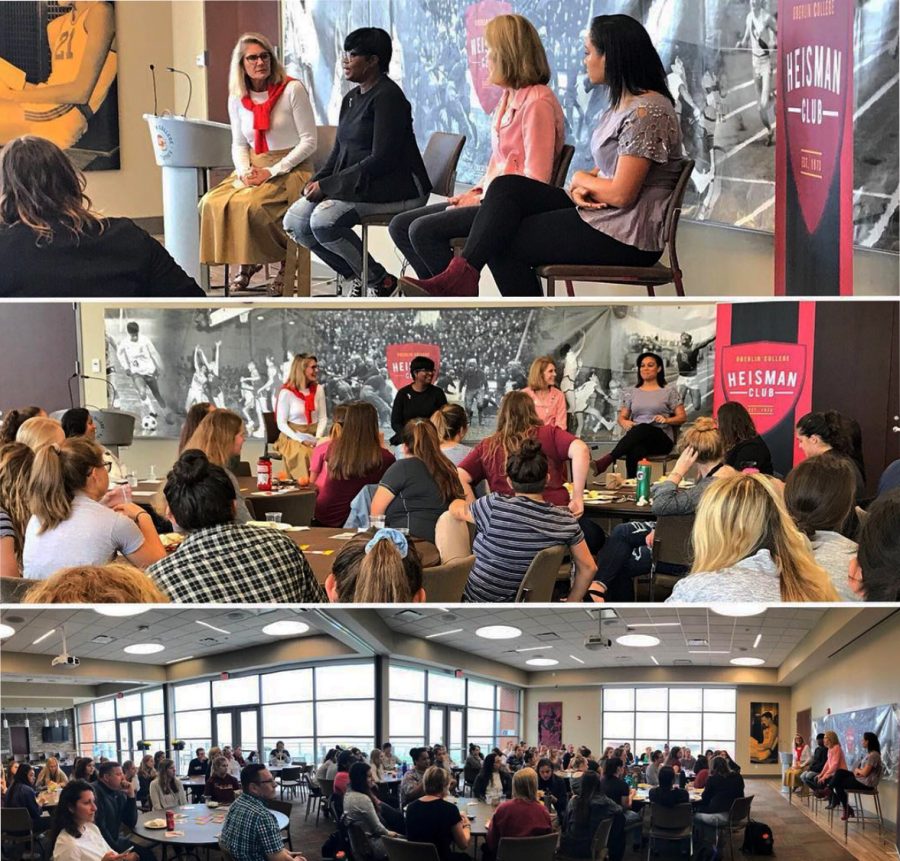 Women athletes gathered together Sunday morning to listen to a power-packed panel of OC women alumnae to cap off of Homecoming Weekend. After a brief breakfast, the participants engaged in an intense discussion about personal impact of OC athletics in Oberlin and beyond.

In a powerful conclusion to homecoming weekend, nearly 100 athletes from women’s sports teams gathered in the Knowlton Social Space on Sunday morning for a panel featuring three former Yeowomen.

Organized by the John W. Heisman Club, the panel was designed to showcase how athletics and their Oberlin educations have impacted their lives post-graduation.

The necessity of a panel like this at the start of the school year, when so many women student-athletes at Oberlin are evaluating their involvement with athletics due to the heavy time constraints from classes, extra-curriculars, and social pulls, was not lost on students.

“I often worry about what my future will look like after Oberlin and if the things that I am doing now will prepare me for post-grad,” said Nae McClain, College junior and one of two student representatives on the Heisman Board. “So I think any chance that I get to [meet people with similar experiences and hear them talk] … about their journey after college is reassuring, especially if they are doing something that makes them happy.”

Colleen O’Neill, OC ’79, T. Billie Streets, OC ’86, and Amanda VanAllen, OC ’09, discussed their professional trajectories and why they consider their experiences with Oberlin Athletics integral to their success as professionals. The panel was moderated by Carla Freyvogel, OC ’79, President of the John W. Heisman Club and ’94 Oberlin College Athletics Hall of Fame inductee.

O’Neill, a four-year member of the women’s swim team, was also an eager participant in intramural basketball, varsity softball, and cross country. After majoring in Psychobiology (which Oberlin now offers as Neuroscience), O’Neill went on to earn a doctoral degree in clinical psychology from the University of Georgia. She currently leads the Korn Ferry Hay Group’s Consumer Market in North America.

Diagnosed with polio at age 12, O’Neill had to amend her workouts and find ways to continue participating in the sports she loves. She emphasized how sports have taught her to be resilient in all facets of her life.

This resonated with some student-athletes who often feel undervalued in their athletic pursuits.

“The value of athletics beyond college, or even high school, is not a narrative I often hear talked about, even as an athlete, but it is a very important one,” said Lauren Fitts, College first-year and member of the women’s cross country team. “I was struck by how [O’Neill] mentioned the fact that a majority of corporate leaders and CEOs were athletes in college. I think it’s a common issue for athletics to be undervalued, especially at competitive liberal arts colleges like Oberlin. But this dynamic makes the points that [O’Neill] made even more essential and empowering to hear as a college athlete.”

Freyvogel — a pre-Title IX athlete who found a career in museum education — makes an effort to find common ground with people everywhere she goes.

“Before I came to Oberlin, I felt like I never really fit into any one place,” she said. “And at Oberlin, I still didn’t. [Practically no] art history majors are athletes. But here, it’s normal to move from circle to circle, without the people from one circle knowing the people from another. It’s about becoming comfortable with not fitting in [just] one place, but fitting in everywhere.”

The panel inspired some women athletes with the uplifting stories of life after Oberlin.

“As a senior on the women’s soccer team, having the opportunity to listen to four accomplished women speak about their lives post-athletics was a privilege — especially as an athlete approaching the end of my own athletics career,” said College senior and women’s soccer player Maddi Kimball. “A lot of inspiration and hope grew within me when they each spoke to how they brought Oberlin into their lives today — how they spread OC love wherever they go and continue to use their ferocity as female athletes in their careers. Specifically, … Freyvogel spoke a lot to how, as young women and athletes, we have the opportunity to control our destinies and ultimately achieve our dreams if we allow ourselves to.”

Streets, who was on the basketball team during her time at Oberlin, graduated with a degree in Sociology and went on to earn an MBA and a Doctorate in Management and Marketing. She recently retired from her career as the Senior Vice President of Events and Communications Administration at the Madison Square Garden Sports and Entertainment Company. Though she is currently invested in using her experience in the corporate sphere to nurture social justice initiatives, Streets didn’t come into Oberlin as an activist.

“For me personally, I learned a lot at Oberlin,” Streets said. “I came from a conservative white town in New Jersey. So I was like, ‘What the hell?’ when I got to Oberlin. [This] is a very unique place. If you don’t come to Oberlin with a passion, you learn how to be passionate here. I learned about diversity of race, thought, and personality, and I took that knowledge into the corporate world. I was able to champion diversity of sexual orientation, race, etc. [in my workplace].”

College junior and member of the women’s basketball team Mackenzie Michaels was touched by Street’s narrative.

“I was so excited to hear that Streets is originally from New Jersey, worked in sports entertainment, is a breast cancer survivor, and was a women’s basketball player,” Michaels said. “I could tell from her personality and disposition that she has worked hard all of her life, which I immediately idolized. Her experience as a student-athlete helped her stay strong and persevere in a field dominated by white men. She made it clear that as former athletes in the workplace, we can harness the drive and grit that we learned in sports. Billie Streets climbed the ladder within MSG entertainment, which has empowered me to look within and ask ‘why can’t I?’”

While the panelists touted how beneficial a liberal arts education was to their careers, there were certain aspects of their lives where their athletic experience played key roles in their day-to-day performance.

VanAllen, a television reporter for WEWS-TV station in Cleveland, was nominated for her first regional Emmy last year. She talked about a relatable hardship that many Oberlin women athletes struggle with. Recalling personal experiences of men in her workplace possessing unwarranted confidence and doing lackluster work, VanAllen lamented that she and her women peers, and herself personally, lack the confidence they need to take what’s owed to them.

“Women tend to doubt ourselves for absolutely no reason,” she said, adding that the aggressive vibe she cultivates in interviews and at work makes her feel like she’s on the court again. “We have to exude more confidence, and things will come to us.”

College junior and field hockey player Fatima Escalera discussed how the lessons gleaned from athletics are transferable to post-grad life.

“She made a point to talk about how being a woman in sports helped her dominate her field as a woman who works in a field [where] all her advisors and bosses are males,” Escalera said. “And she talked about how she has to do double the amount of work than her superiors and peers, but that doesn’t mean that she stops working. When she was in college doing sports she had to do the same thing — she had to prove to her teammates and her coaches that ‘I am good enough to be on the court, I am good enough to play this game.’ And when she’s at work, it’s like ‘well, I’m good enough to go on TV, I’m good enough to pitch my stories, and if one story doesn’t make it, that doesn’t mean I stop trying. If anything, it just means I have to speak louder to be heard,’ because once [she does] get heard, she can pitch out stories that, for her, seem very relevant because they’re not being talked about, especially when she talked about how POC get represented in the media.”

VanAllen, who was a double-major at Oberlin, reported that while her career involves constantly speaking on-air and writing articles, she finds herself harkening back to her African American studies major more often than her English major.

When reporting on local crime, VanAllen chooses to ditch the racial identifiers, recognizing that police profiles can be wrong and can perpetuate negative stereotypes for certain communities. Additionally, in her weekly pitches, she advocated for many hopeful stories about community building and positive events happening in communities of color, hoping to highlight the good in these communities, rather than stereotyping the negative.

Attending the panel afforded the women athletes an opportunity to hear from former Obies who are using their experiences to navigate the world around them.

“We never really see post life for DIII athletes — it’s mostly DI athletes — or when we think of athletes we mainly think of DI sports, it’s never DII or DIII, and it was kind of empowering to hear [from them],” Escalera said. “To see that they’re all in strong positions — we had a news anchor, we had someone with a medical degree, we had someone who works for a big arena — it’s very important.”

Following the end of the structured panel, in the midst of athletes going up to talk to the panelists one-on-one, a comment made earlier in the session by Streets hung in the air as an important reminder to women athletes.

“You’re in a great place right now,” she said. “You can do whatever the hell you want to do. There are so many possibilities. If I was 21 again, the world would be in trouble.”