In The Locker Room with Justin Godfrey, Defensive Lineman and Northeast Ohio Native 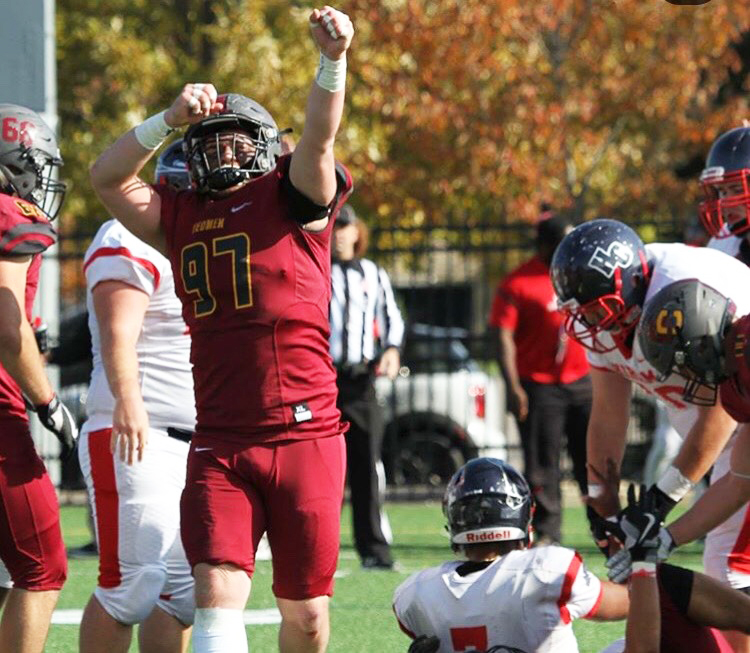 College junior Justin Godfrey, a Westlake, Ohio native, is a defensive lineman on the football team and studies History and Classics. During his time at Oberlin he has used his familiarity with Northeast Ohio and passion for Cleveland to attract prospective students and help out-of-state students become comfortable on campus. Godfrey worked for the College of Arts and Science’s Admissions team over the summer, is a co-captain of the football team, a member of Athlete Bible Study, and a former student senator.

You’re a captain this year, and last weekend you recorded your 100th tackle. How does it feel to have achieved these two things?

Being a captain as a junior is something that is really special to me. I think I’ve always been a person who really values hard work and dedication, and it’s really been an honor to receive the ultimate validation that I have been working hard and have been dedicated to our team.

I think 100 tackles is really great and is a personal achievement. I didn’t get to play a lot of defense in high school, and when I came to college, the transition from O-line to D-line took place immediately. [Reaching 100 tackles] is something I really wanted to do by this year, but I’m not the first one. [College junior] Von Wooding got his 100th tackle last season.

What do you hope the team will accomplish by the end of the season?

Obviously we have our team goals; we have certain games we would like to win. We believe we have the chance to win every single game going down the line. We have a lot of talent and are really explosive on offense. [College junior] Zach Taylor just reached 5,000 passing yards. He’s one of the best quarterbacks in Oberlin history. [College junior] Jason Hewitt just had one of the best games I’ve ever seen from an offensive lineman in my time here at Oberlin last weekend. Our entire O-line is great. I really have those guys to thank when it comes to preparing every week. We have six offensive linemen, so having those guys — our starting offensive line — as the guys who you’re going against every single day [at practice] is really helpful for me and for all of our defense. I think we have been progressing in our defensive identity, and it’s something that you see in practice and in games. We play really hard, and I’m really proud of us.

You were in the same high school conference as current teammates and College juniors Jack Lesniak and Chandler Laird. Did you know each other when you faced off in high school?

I didn’t commit to Oberlin until December, but Oberlin was one of my top schools throughout my senior season. I didn’t know about Jack until I was training at T3, and someone was like, “Oh, you’re going to Oberlin? My buddy Jack is going there.” I found him on Twitter, and we kind of became friends from there.

Chandler and I actually got into a scrape our senior year, which is a story I love telling. He cut-blocked me and was on the ground, and I may or may not have stepped on him. It was interesting when I learned that Chandler was coming to Oberlin as well, but now I love him. In high school he was just this gigantic football player that I had to go up against, but now he’s one of my best friends. Same with Jack. They’ve both become some of my best friends here at Oberlin.

It’s cool, because they’re guys who kind of understand how I grew up. There’s just a certain way of being when you’re from Northeast Ohio — certain mannerisms. It’s Midwestern with hints of Boston culture. Cleveland and Boston have a very similar feel to them. It’s something you can tell on the practice field or just hanging out. Something with us just kind of clicks.

Can you explain what you did through Admissions and Senate to connect students to Northeast Ohio?

It was really cool with Admissions, because during my tours or info sessions I was able to give a perspective that I don’t think other students were able to. I’m not the only one in Admissions from Northeast Ohio, but I was definitely a part of expanding the new Admissions presentation, and we included more and more Cleveland stuff in it toward the end of the summer.

With Senate, I did some work trying to connect students to Northeast Ohio through the Cleveland [Immersion] Program. That was something [Assistant Vice President of Student Life] Adrian Bautista and I and a few others were really interested in doing. We had a couple meetings this summer about possibilities of what this should look like and where we should go. I think there was a good response to that program.

It’s hard to teach being a Northeast Ohioan, especially at Oberlin. Oberlin is a little bit different from the rest of the area because it is a small college town, with people primarily from outside of Ohio. But I hope Oberlin students — especially the first-years — feel more comfortable going to places like Westlake, Avon, North Ridgeville, Ohio City, and other places around here.

What are some of the hotspots around the area that you recommend to out-of-state students?

Obviously I have to hype up Westlake, where I grew up. It’s one of my favorite towns ever. I grew up two streets down from Crocker Park. It’s just a cool atmosphere. Obviously it’s very commercial — there’s the outdoor shopping center. But there are a lot of little hidden gems. They have performances there and this big chess board set outside. I remember my brother and I used to play chess there all day long. That was the hangout for middle schoolers.

I also love Ohio City. My girlfriend lives there, so I spend a lot of time there. She works at the West Side Market, so that’s where I get all my groceries. Downtown Cleveland is amazing. Playhouse Square is my favorite part of it. Plays and musicals were big in my family growing up — going out to see Jersey Boys or Aladdin. It’s something I’ve always appreciated — that entire downtown area. Obviously Cleveland sports are near and dear to my heart too. I’m a New England sports fan as well, but I always root for Cleveland. Cleveland Browns games are the coolest atmosphere ever. I’ve been to Patriots and Browns games, and the atmosphere at Browns games is so much different and, in my opinion, better than Pats games, just because everybody wants to win so bad.

What role did you play in bringing in trainers from T3 Performance to work with student-athletes after former athletic trainer Grant Butler accepted a position at Notre Dame College?

I remember I was in Massachusetts, where my parents now live, and [Head Football] Coach [Jay] Anderson did a big conference call and told us Coach Butler was leaving and that there was a wide search going on. I asked Coach Anderson, “Can I call my friends at T3 to see if they’re interested in coming in and talking to [Delta Lodge Director of Athletics and Physical Education] Natalie [Winkelfoos]?” I called them, and they were like, “Oh, yeah, that’s awesome.” They work with [the University of] Mount Union, a Division III powerhouse, so I was really excited. I talked with Natalie and kind of talked them up a bit.

I love T3. I’ve been training there since I was like 14 years old. CT [Collin Taylor] is awesome and just an absolute bro. James [Dibiasio] and I have very contrasting personalities, but he was my coach all summer. I love him. I’m really happy to have Maddy [Mullins] back. She was gone for a year and half in Texas, I believe getting her Master’s in coaching there. She’s very quiet and reserved and I’m very loud and kind of a jokester, so our personalities mesh really well.