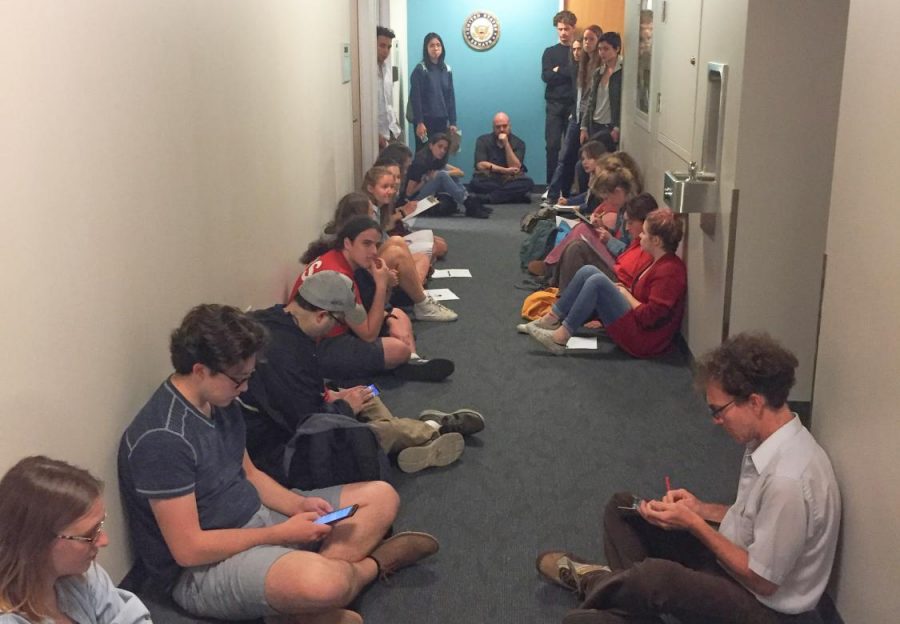 Oberlin students rallied in Cleveland in a series of protests against the confirmation of Judge Brett Kavanaugh to the United States Supreme Court last week.

The demonstrations began Thursday, Oct. 4 with a sit-in at Senator Rob Portman’s Cleveland office, and ended with a march through downtown Cleveland Saturday, hours before Kavanaugh’s confirmation.

“It would be a complete atrocity and a perversion of the justice system in the United States if Kavanaugh — when Kavanaugh gets elected,” College sophomore Mitch Mitchell-Israel said Thursday. “I’m a bit more cynical of it now than I think I should be, but he lied to Congress, he’s a likely rapist, and he frankly doesn’t have the character to be on the Supreme Court. I think having him on the Supreme Court would not only be a insult to the American people but a degradation of the institution itself.”

Controversy over Kavanaugh’s nomination spiked after an anonymous source leaked Dr. Christine Blasey Ford’s letter to Senator Dianne Feinstein in which Ford alleged that Kavanaugh sexually assaulted her when the two were in high school.

Following Ford’s allegations, Deborah Ramirez and Julie Swetnick came forward to accuse Kavanaugh of sexual misconduct as well. Protestors at the Thursday and Saturday demonstrations expressed support for survivors of sexual abuse and disdain for Kava- naugh’s views on abortion.

“We need to keep rapists and domestic terrorists out of the Supreme Court,” protester Mo Mzik said. “We need to represent people, and not corporations.”

Mzik is a member of the Cleveland Democratic Socialists of America, an organization that strives to limit the power of corporations. DSA Cleveland led the Thursday sit-in as part of the group’s #CancelKavanaugh demonstration. The goal of the protest was to raise awareness rather than change minds.

“It’s [the protest] calling attention to the elephant in the room, and knowing it’s not going away,” Mzik said.

Portman is vocal about his support of Kavanaugh, having worked with him at the White House during the Bush administration. Regarding the sexual assault allegations, Portman stated that Kavanaugh was unjustly accused.

“Right now, we have a Supreme Court Justice who’s nominated, who has been accused of sexual assault, and I would personally prefer if a predator was not in the highest court of the land for the rest of his life,” Ward said.

Students like College first-year Mark Sheehan disapprove of Kavanaugh’s policies as well as his actions.

“I have been disgusted by everything I’ve seen with Kavanaugh, including his history of sexual assault, his complicity with U.S. war crimes at Guantanamo Bay, his dismal record on environmental issues and reproductive rights, and his decision to repeatedly lie under oath,” Sheehan said.

Oberlin students entered the Anthony J. Celebrezze Federal Building Thursday after 4 p.m. and were met with barriers while trying to visit Portman’s office.

“[Security] kind of tried to bottleneck us a little bit,” Mitchell-Israel said. “First at security, they wouldn’t let people in for a while, being very slow. And once we got upstairs, they tried to stop people at the hallway so that they couldn’t actually go to the office to sit in there, but eventually we got everyone in to occupy, and it’s a really tiny office.” Most students could not enter the office, and chose instead to sit in the hallway.

Once admitted into Portman’s office, demonstrators asked staffers to call Portman about his support of Kavanaugh. Staff refused to comply.

“There was this one woman who we talked to for a very long time, and she expressed repeatedly the senti

ment that the best we could do would be to write down something, and to have her give it to him,” Mitchell-Israel said. “I think it’s a cop-out move on their part and I think it’s evident by the fact that so many students have written to Sen. Portman and have gotten no response, have seen no change in policy, or in his ideas that he talks about in his speeches at all.”

Approximately 20 students attempted to call Portman’s multiple offices. College senior Claudia Baker was the only to receive a response, speaking to a representative in Portman’s Washington, D.C. office after her third call.

“I tried to contact Senator Portman multiple times over the last year and a half, and he has never responded to any of my inquiries to his office,” Baker said.

The low success rate motivated many demonstrators to occupy the office.

“You can call your senators as many times as you want and send as many letters as you want, but I think a lot of people know that that just doesn’t get it done, you know, it’s not enough,” Ward said.

Other demonstrators do not believe protesting will be enough to affect change.

“Sadly, protests are nowhere near as successful as people think they will be, or as they should be,” College senior Lotte Brewer said. “I think one of the best things that comes out of protesting is that it’s bad press for the people in power, for the people you’re protesting.”

The sit-in ran 45 minutes past the office’s closing, at which point two police officers approached students, informing them that they needed to leave.

“Someone kind of kept asking, what are the consequences if we don’t leave, and they never directly said we would get arrested, but they kind of kept implying it,” Brewer said. “They said, ‘you’d be trespassing.’”

“I personally was not planning on getting arrested and getting a federal charge today; it wasn’t on my Google Calendar,” Ward said. “But at that point we figured that was the closest we were gonna get to getting escorted out, so we figured out, like, we should just call it.”

Hours before Kavanaugh’s confirmation Saturday, Brewer returned to downtown Cleveland along with Emma Davey, OC ’18, and College senior Emma Baker and junior Emma Bredthauer. The four joined more than 100 protesters in the “No Justice, No Seat” rally organized by the Women’s March of Northeast Ohio. In attendance were local speakers Kenyona Sunny Matthews and State Representative Janine Boyd.

“The protest was pretty small, but the speakers that came were amazing and very powerful,” Baker said.

After Kavanaugh’s confirmation, the students who protested insisted that the midterm elections in November are the next opportunity to affect significant change.