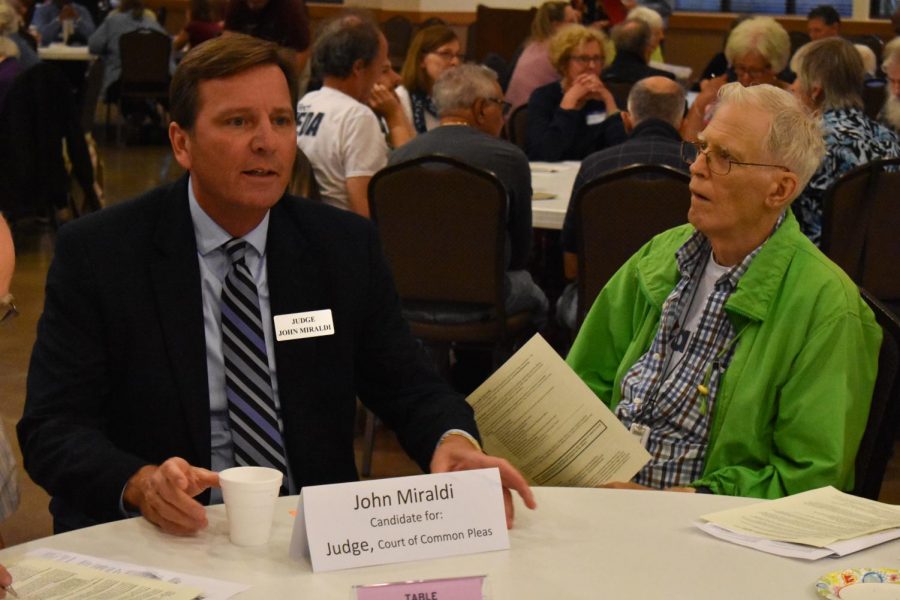 Ten local candidates answered questions from community members at Community Candidate Night on Tuesday, Oct. 2. The event was organized by Oberlin’s League of Women Voters chapter, and encouraged residents to interact with candidates and learn about their platforms. Candidates for Ohio State Senate, Ohio House of Representatives, local judges, county commissioners office, and the county auditor’s office were in attendance.

“I feel I bring a unique perspective because I’ve spent my life helping the underdog,” Sweda said. “My life’s work has been building communities, helping to restore broken communities. I know what keeps people up at night.”

Sweda added that her priorities include affordable healthcare, a sustainable economy, and immigration reform.

Libertarian Homer Taft is challenging both Sweda and Manning.

Democrat Dan Ramos has served District 56, which include Oberlin, in the Ohio House of Representatives for nearly a decade. Democrat Joe Miller and Republican Rob Weber are running for his seat.

Miller mentioned his experience working as a teacher at Firelands High School in Oberlin and as a member of the Amherst City Council.

“I plan on approaching [The House of Representatives] the same way I approach education, teaching, and my fellow citizens — and that’s [with] an unbiased, open mind,” Miller said. “The very logical, approachable person that I am. I’m going to make sure we focus on good solutions, not political solutions. We’re going to get policies that work for more people.”

Miller spoke about the Nexus pipeline passing through the city of Oberlin and his passion for environmental sustainability.

“I was disheartened with the fact that we are still promoting the movement of fossil fuels, and the pipeline is a good example,” Miller said. “Of course you know what’s north of us—a lake—a clean water source, a source of wind, a source of current, a source of tourism. We need to keep this area as clean and renewable energy-based as possible.”

If elected, Weber’s concern would be the economy, and the opioid epidemic. He plans to support law enforcement and prioritize mental health services to combat the opioid crisis.

Incumbent Judge John Miraldi shares this concern over the impacts of addiction.

“I preside over and created the Lorain County recovery court,” Miraldi said. “It is a drug court that assists individuals who are addicted to opiods who become involved in the criminal justice system. I’m the only judge in the general devotion to have three dockets. I don’t receive any additional compensation for that, but I saw the need.”

Miraldi’s opponent, Jenifer Berki Merrill, would be the second woman to serve on the county’s general division for Common Pleas if elected.

“I am running because I feel that I can make a difference,” Merrill said. “I feel

that I can bring a fresh, new perspective to the bench.”

“Two events got me involved in running for county commissioner, and both were in 2016, within weeks of each other,” Ciarrone explained. “One was President Trump’s victory. I know he’s not the most popular fellow, but you’ve got to love the story of the underdog.”

Two candidates have risen to the top in the race for the County Auditor’s office: Democratic incumbent Craig Snodgrass and Libertarian Mike Doran. During Candidate Night, Doran discussed the changes he wants to make in office.

“I’d like there to be more transparency as to the non-real estate part of the office,” he said.

Snodgrass responded with a quip, joking that Doran hadn’t done his research.

Snodgrass has been the County Auditor for nearly nearly six years and was a certified public Accountant before that.

“I’ve made public service my life; 24 years I’ve worked in government,” he said. “I love what I do. Love my office, love my job, and I love hearing from the people.”