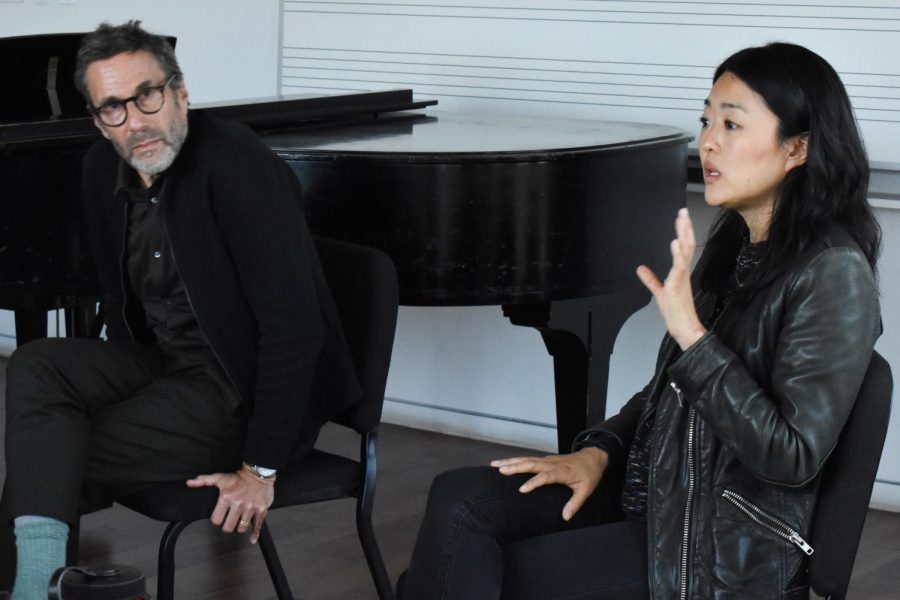 Music executives Bruce Lampcov, OC ’77, and Jumee Park, OC ’99, spoke to students about their experiences breaking into the music industry.

Oberlin alumni Bruce Lampcov, OC ’77, and Jumee Park, OC ’99, executives at Downtown Music Publishing, gave a talk on their experiences in breaking into the music industry on Tuesday, Oct. 30 in Bibbins Hall. Lampcov has signed esteemed artists like Taylor Swift and Kanye West, and works as the head of West Coast Development for Downtown Music Publishing. Park is the director of Film/TV Music for Downtown Music Publishing. She works in synchronization rights, which allow the holder of a music copyright to grant a license for the synchronization of music to some kind of visual media output. Park places songs in television, film, and other types of media.

Can you both tell me about your time at Oberlin, and how you broke into the music industry?

Jumee Park: I graduated in 1999 with an English degree. I always loved music and knew I wanted to do something with it. For a split second, I thought I would go into a performance of some kind — I have horrible stage fright, so that was not going to happen. So, I started interning at Matador Records [and Beggars Banquet Records] during the summer of [1996] and just grabbed every internship I could. I was basically circling the music industry trying to make my way in, so I took in any job that was tangential.

I took another internship with a music manager and waitressed on the side for a while, then got a job at The American Society of Composers, Authors, and Publishers. After that, I got a job at a music supervision company called Agoraphone. From there, I worked at Domino Records and Publishing, my first real publishing job. That’s where I worked with Arctic Monkeys and this band called Caribou, and The Kills. The Kills were amazing for sync, which is what really opened the door and my eyes to that world. I’ve been at Downtown Publishing for about ten years, overseeing their sync licensing business for film and TV.

Bruce Lampcov: I went to Oberlin between 1973 and 1977, graduated in 1977 as a Physics major. While I did physics, I was a musician. I didn’t go to the Conservatory but took classes there. I was in a couple of bands — a bluegrass band and a rock band. Music was a big part of my life up until then, but so was science.

I took science as my path and had an internship with an organization that was called the [National] Center for Appropriate Technology, which had scientists come around the world to do research that focused on creating technology for low-income communities in the United States. That led to another job in Seattle with a company called Ecotope, where I did very similar things — government projects, creating technologies. I did that for a number of years while still playing in bands in Seattle.

It was the wrong time to be in a band — this was pre-Nirvana, so there wasn’t much of a music scene, [but] at that time, I just wanted to be in a band. So, I took my band to New York from Seattle.

I realized very quickly that I didn’t have what it takes to be an artist. Being in Seattle is one thing, but going to New York was a wakeup call. So I thought I will just need to meet some people and go back to my old job. I took a recording engineering class at The New School. It was a revelation to me — I was 28 at the time and felt like I was very old to be starting from scratch. But I was determined to try to get a job at a recording studio. I didn’t know anything about recording studios and didn’t have any connections. I looked at the back of my favorite [albums] of my favorite artists and where they recorded their records, and [I] made a list of 20 studios in New York. Once a week I went to every single one, and three months later I got a job at a place called PowerStation Studios as the receptionist answering phones.

Then it was a matter of focusing and learning my trade. I had to go to work at 9 a.m. every morning to sit at the front desk, but actually got to the office at 6 a.m. every morning and I would take tapes down and learn how to record and mix on my own time. I knew I had to do a lot of catch-up.

One day I heard that David Bowie was coming in to do his next record, and I killed to get into that session. It was “Let’s Dance,” and that led to me working with Bruce Springsteen and David Bowie and many other artists, first as an assistant engineer and [then] as an engineer. Eventually I started getting my own clients. I ended up moving to the U.K. because many of the artists I worked with were based there. I worked with The Pretenders, Peter Gabriel, Simple Minds, Eurythmics, Simply Red.

But at some point, the balance between my home life and my career was totally skewed the wrong way. I had two small children, [and] my wife felt like she was a single mom because I was never home. I made the very difficult decision to just stop doing it.

In 2001, I ended up getting headhunted by a new publishing company called Kobalt Music. Today, Kobalt is the largest independent music publisher in the world, and I was the first employee there. They were looking to create a new tech-driven type of publisher. I knew nothing about publishing, and had to call a friend of mine to explain what publishing was. I helped build the company without knowing much about publishing, and we were very successful in a very short period of time. We created a lot of noise in the industry.

How have the degrees you’ve gotten as students in Oberlin affected your trajectory in the music industry?

JP: I got my M.B.A. at New York University, but I did it part-time. I was working full-time and going to class and working on the weekends and at night. I don’t really know if my M.B.A. is something the music industry looks at and says it’s very valuable to us. It’s not like it’s gotten me head-hunted or anything — it was more to exercise the analytical part of my brain, and to take that information to contribute to my role that I felt would be useful. I did it for me, not to say that this is going to be my career path from this point forward, but [to ask], what else can I learn and do for my life to enhance my skill set?

For me, the English major was so good. Being at Oberlin was so great because it was the kind of school I needed. I needed to be in a place where I could mature, grow up, meet tons of new people, have a whole bunch of life experiences. The English major itself is lumped into that group of majors like communication or philosophy, where people say, “What am I going to do with an English major?” To me, it was to be able to understand how to interpret texts, to analyze, and to look at something and be able to break it down. That is something that has stayed with me to this day. I think that what I realize over the years is that it doesn’t really matter what you study in undergrad, but it matters that you study something and learn how to have a great organizational mind and to be a great communicator.

BL: The first thing that happened to me when I got into studio was I looked around and there were 18-year-olds — I was 28 and felt like the old guy in the room. My first inclination was why didn’t I just do this out of high school? I was an assistant to Bob Clearmountain — he had already made about every Chic record, mixed the Rolling Stones, mixed the Clash. He’d done every Bruce Springsteen record and I was just his assistant engineer; why so late, you know? Then I thought about it, and you can’t have regrets about everything you do in your life. Then you have to look at it in your own personal development, and look at all the things you’ve done to get where you are. I [looked] back and thought, had I not done my physics degree, I never would have done music. It gave me an immense amount of discipline and focus. You need that sort of thing working in the sciences. [And] the key thing about engineering is that whether it’s a technical or creative problem, it’s always problem solving.

But I didn’t just do science because it’s a liberal arts college. I studied English as well, I studied poetry, psychology, economics. All of those together — it’s very much a cliché — helped me become a more well-rounded person. I sit in a room as a producer with, say, Chrissie Hynde or Matt Johnson or Annie Lennox, and we talk about literature together. If I never had that experience to learn how to relate to people, talking politics, literature, life, or religion, all those things helped the entire process because I’m someone in the room they can relate to.

Any tips on getting started out in the music industry?

JP: For anyone starting out in the music industry, anyone wanting to get involved as a songwriter or artist, is to educate yourself and do your research. Know what you’re getting into.

If you really want to start out, and you’re not sure how to get noticed, there’s the usual way of putting your stuff out on Soundcloud and playing gigs. If you’re an amazing performer but you’re not sure you’re a songwriter yet, I would say one way we’ve certainly noticed artists and have signed people that way, is [to] cover songs in your own voice.

Don’t grow in a bubble. Find your community and peers, and work with them. You need to learn from other people and get inspired by them. Become part of a scene — going off on your own [it’s] much harder to find your audience. The support that artists give each other is important not only practically, like getting gigs and opportunities, but also creative inspiration.