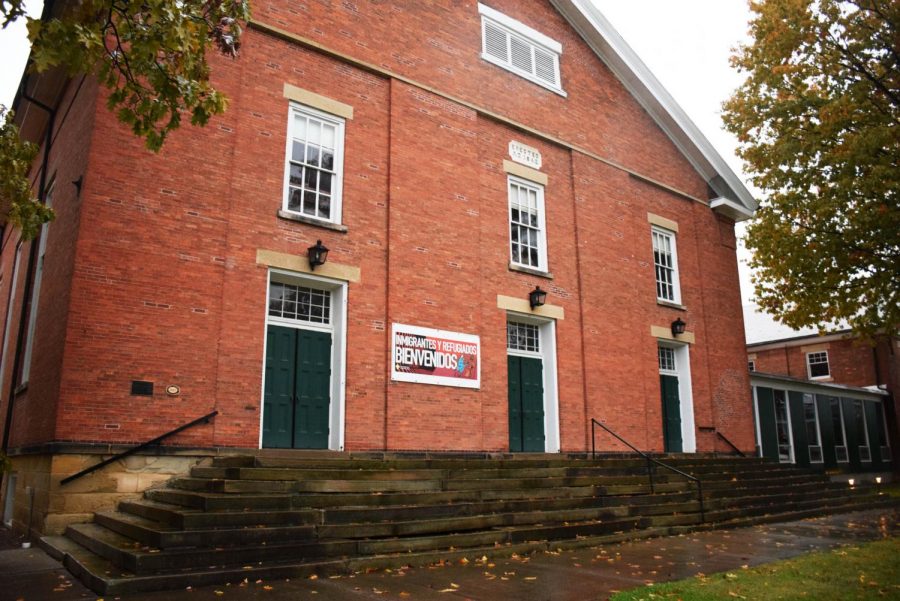 The First Church in Oberlin pictured with a sign reading “Inmigrantes y Refugiados Bienvenidos,” which translates to Immigrants and Refugees Welcome.

The First Church in Oberlin United Church of Christ opened a sanctuary space for undocumented immigrants beginning mid-October. It is a space iwhere people in need of shelter who have been marked for deportation can temporarily live while they sort out the legality of their immigration status.

“That’s something that we learned very early on,” said Reverend David Hill. “You cannot tell people that you take in that you have the ability to completely protect them because, legally, you don’t. You’re just making it more inconvenient for ICE to come after them.”

ICE’s official policy states they will not take enforcement actions at sensitive locations unless presented with “exigent circumstances.”

“This church has a long history of being involved in justice issues — that’s a big part of what First Church is — and that goes all the way back to the earliest days of Oberlin,” Rev. Hill said. “It seems just natural for us to embrace the sanctuary issue.”

John Gates is the chair of First Church’s Sanctuary Task Group. The church has spent months preparing for the opening of this space, which is at an undisclosed location and maintained by the church

“Many of the people who are in danger of being deported have lived in the United States for many years. They have families, and they have work, and some of them even own businesses. They have demonstrated that they are responsible citizens, good neighbors; they contribute to the community in which they live,” Gates said. “We think that we have a duty to step in [and protect these individuals].”

A number of people came to speak at First Church since April, including representatives of churches already providing sanctuary, a woman at risk of being deported, Professor of History Emeritus Steve Volk, and Professor of Comparative American Studies Gina Pérez.

“Talking to First Church was great,” said Volk, who has been involved in this issue since advocating Oberlin to become a sanctuary city in 2007. “Different [sanctuary] churches do different things, so some just tell the parishioners, ‘by the way, we are a sanctuary church.’ First Church was so amazingly responsible and concerned with the congregation in general that they had a fairly lengthy process of education so that the congregation could be informed enough to vote on it. So I was delighted to be part of what was not just an open and welcoming process, but a very democratic one.”

Hill echoed this and said that because of the thoughtful discussion process, the congregation was able to make the decision and vote on the issue fully informed of the responsibilities and ramifications involved.

“The congregation really had a chance to ask all of their questions,” Hill said. “What sort of legal jeopardy could this put the church in? Who would we take in? Would we just take in anybody? Would they stay here forever? How much is this going to cost? Will there be enough volunteers in the greater Oberlin/Lorain County area to support this?”

It took about three months of preparation before the task group felt ready to present the plan to the congregation.

“We needed to see if [everyone] would agree that this is an issue in which we should be engaged. It was a long process,” Gates explained. “There was a vote on it, and it was a unanimous vote that yes, we should do this.”

Since the vote in April, the church has been working on the logistics of the housing situation.

“The room is ready; at this point, we’re just waiting for someone to need sheltering in Lorain County,” Hill said. “I think the church is really blessed to be in this great community because we couldn’t do this on our own. If we end up housing somebody, that is just going to be a lot of volunteer tasks that are involved. But to be in a community that embraces issues like this and is in line with First Church, […] I think when the time comes that we are sheltering somebody we will be in good shape.”

Rev. Hill also mentioned that once the need is there, there will be plenty of opportunities for Oberlin students to get involved if they wish to.