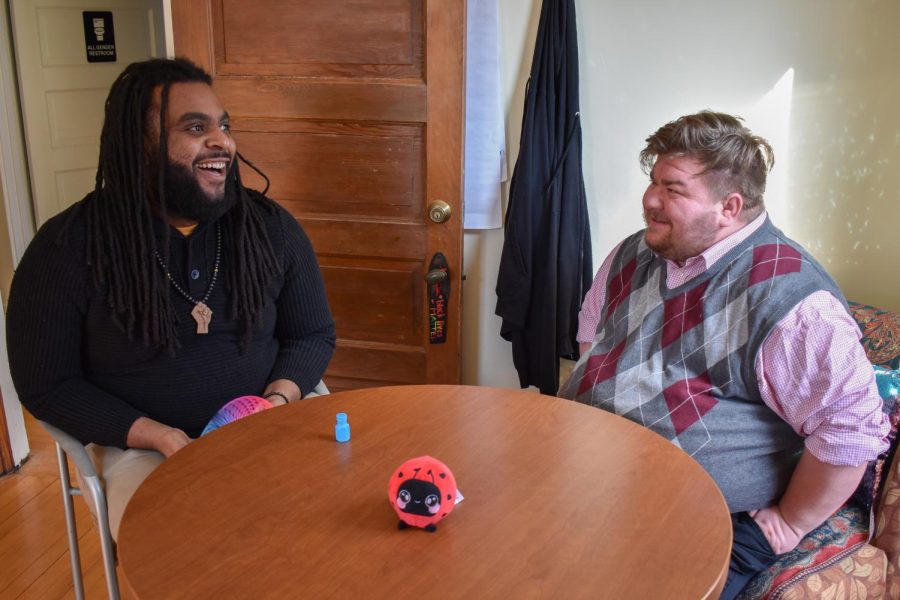 Khalid Taylor and Elliot Director share a conversation in the MRC.

Four full-time staff members resigned from positions at the Multicultural Resource Center within the last six months. The office was once staffed by five full-time staffers. The MRC is currently run by Assistant Vice President Adrian Bautista, who is serving as the interim director, Student Life Community Coordinator Khalid Taylor, OC ’17, and LGBTQ Community Coordinator Elliot Director, who will discontinue work Nov. 30.

Director, the most recent staff member to resign, submitted a resignation on Oct. 30. Toni Myers, former Director of the MRC, vacated their position in June. Interim Director Anna Phung and Libni Lopez both left the MRC for alternative positions this October. Students and MRC staff members have raised concerns about the organization’s diminished capacity to provide support for students.

The MRC provides a place for students to feel safe and welcomed. Staff members direct students to resources on campus and offer a support system for individuals who may be uncomfortable turning elsewhere. The MRC also engages in efforts to educate the community at large around issues of diversity.

“I would say that this space serves as an oasis and a bit of a stronghold for students to find sanctuary and find a place to be who and how they are unapologetically,” Taylor said.

College senior EmmaLia Mariner highlights the impact that the MRC and its staff have had in Oberlin.

“You can’t understate the importance of that space,” Mariner said. “The people that worked there last year really have given their heart and soul to this school, and I really hope that those positions are open for more phenomenal staff members and that the staff members are supported in staying here.”

College sophomore Gio Donovan is just one of the students worried about the future of support at Oberlin.

“I genuinely fear that the MRC is not going to be a thing after this year anymore or that it’ll get absorbed by something else, like [the Division of Student Life],” Donovan said.

Bautista has been approached by concerned students. However, he is confident the MRC will continue to provide support and resources.

“We are continuing to plan essential programs, supporting collaboration within the College, and serving as a campus-wide resource,” Bautista said in an email to the Review.

Director resigned partly because he feels that senior administrators were not providing necessary support for the MRC and its staff to continue their work.

“I think that we have seen support waning for the MRC and our vision and our agenda from the upper-level administration,” Director said. “I would say even in our basic requests, and needs for support, all of them are shut down. I don’t think that the MRC broadly, and personally as staff members that there is support from directly overhead. It felt like it was time to step back because … I was not being supported in the way [MRC staff ] needs to be.”

Bautista emphasizes that he will make sure the MRC staff has both adequate resources and opportunities to offer input about the future of the MRC. He also noted that many MRC employees moved on to pursue important career opportunities.

“We are happy to see MRC staff move from what might be considered entry-level posts to next stages in their careers, both at Oberlin and beyond,” Bautista wrote. “We want the MRC to be staffed by incredibly talented, dedicated new professionals who go on to graduate school or a next position that allows them to continue impacting the lives of many others.”

The College has formed a diverse search committee made up of both students and staff to hire a new MRC director, who would ideally begin work spring semester. The committee has already begun reviewing applications. Conservatory senior Jason Arevalo, a student member of the search committee, is confident that process will be thorough.

“I see how the administration is trying to make sure that we take the right steps to ensure that when we do find the right candidates … hopefully, it will be someone who is sensitive to the needs of students, sensitive to what the MRC has been, and sensitive to bringing their own vision as well,” said Arevalo.

In an email from Dean of Students Meredith Raimondo, the committee asked for student attendance at listening sessions on Nov. 13 and 19. to gain student perspectives.

“We are committed to engaging in a search that has a high degree of student involvement and feedback as well as transparency,” Bautista wrote.

Despite the ongoing search for a new director, some feel the MRC is still in danger of being underfunded and understaffed due to the College’s financial situation.

“We were met with a lot of expression of difficulty in reconciling the [multiple resignations] due to financial constraints at the College,” said Taylor. “A lot of situations of trying to advocate for more support was met with being told that we are in a deficit model.”

Remaining staffers are concerned that the MRC is missing a clear vision since losing impactful members of staff.

“While I do think it is an important move to bring a director into the situation, I think that that cannot solve the larger issues at play,” Taylor said. “I have more questions than answers at this moment.”

Director emphasized that students may have more influence than they realize in advocating for organizations like the MRC.

“Students forget they have power here,” Director said. “Their voices in many, and maybe most, ways have the ability to outweigh the voices of staff and faculty if they use them. If there are needs that are … not being met, I think one of the most powerful things students can do is to use their voices individually and collectively.”

Taylor noted that the burden to advocate for resources like the MRC should not fall entirely on those who use the center directly.

“The very origins of this center come from the community wanting it to exist and making it clear the expectations and desires for it to be in existence,” said Taylor. “That is everyone’s responsibility, not just those who are marginalized.”

MRC staff encourage students to continue to come to the MRC amidst staffing changes.