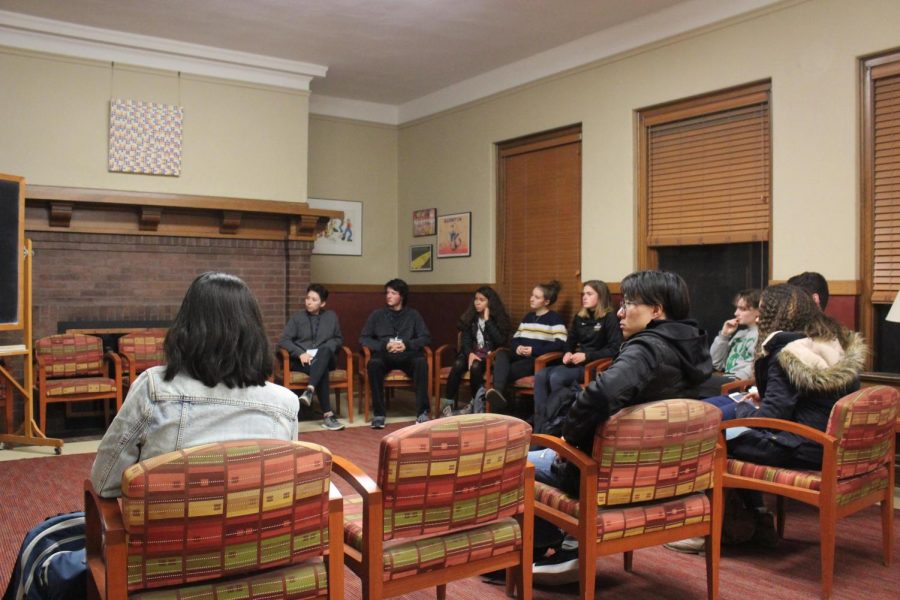 Project Unbound, an Oberlin-based anti-human trafficking organization, will host their annual fall fundraiser for the Human Trafficking Collaborative of Lorain County on Friday, Nov. 16. The event will be the group’s second in as many weeks; they held a workshop yesterday titled “The Neurological Impact of Slavery.”

“This is the first and only fundraiser [we have done] for the Collaborative, as a way of supporting our partner,” said College senior and History major Kellianne Doyle, who is currently the chair of Project Unbound.

By partnering with the Collaborative and raising funds, Project Unbound seeks to address the issues and help the people who are trapped in human trafficking.

“It is really the biggest event we host all year. We kept it up and I’m keeping it up this year because it attracts such an audience. Just because [human trafficking] is such a heavy topic, it is not something I want to give up, because so many people come on such a rare opportunity to express the issue,” Doyle said.

Sarah Blum, OC ’18, former chair of Project Unbound, feels that this event is particularly impactful and motivating for community members.

“The annual fundraiser was always a reminder of hope for me,” Blum said. “As chair of an anti- trafficking organization, I learned a lot of darkness in the world. I always left the fundraiser with a pocket of light as I felt the effects of a community dedicated to change.”

At the fundraiser, students will speak on why they joined Project Unbound and what they learned. It is possible that Mindi Kuebler, director of the Collaborative, will come and talk about how it started and what it does, depending on her schedule. Additionally, there will be musical performances by students from the College, Conservatory, and from other institutions.

“We try to incorporate the music, because we think it is a good way of lightening up the mood of such a heavy topic, while also giving people the information they need to know and creating a solidarity kind of space, with musicians, artist, and students in the community,” Doyle said.

The Collaborative works to rescue those who are trafficked, support them after they are out, and help them get to medical appointments. The Collaborative also supports their additional needs — for example, if they want to go back to school, if they want to get a job, or if they need to get a house. Project Unbound works with the Collaborative, helping them to get funds and expand on local campaigns by introducing them to Oberlin College. Project Unbound also aims to educate Oberlin students on the issues related to human trafficking.

“The organization’s main goal is education, because there [are] a lot of misunderstandings around human trafficking. People don’t know that it happened, and if they do know it happens, [they think] it’s an international problem and not something that’s happening in the United States. So we want to educate people on how human trafficking occurs, and that it happens all over the United States, and in Ohio, not only in Lorain County but also in Toledo and southern Ohio,” Doyle said.

Ohio is the fifth leading state for human trafficking in the U.S.

As the chair of the organization, Doyle is responsible for organizing workshops, meetings, and communicating with the Collaborative.

The workshop on Nov. 8 was meant to be discussion-based. Besides looking at a few handouts and listening to a short lecture given by Doyle, the participants were encouraged to turn to their neighbors and discuss the things they learned and how they felt. As Doyle suggests, a big aspect to teaching about human trafficking is that it is a heavy topic, and people are often hesitant to discuss it.

“We want to present it in a way that people don’t feel immediately depressed upon learning about it,” Doyle said.

“I’ve seen one or two events [relating to human trafficking] on campus,” Harris said. “But it is definitely not talked about at the rate that it should be.”

Project Unbound has been dedicated to spreading knowledge about human trafficking in Oberlin and beyond, seeking ways for students to face and understand this important issue.

“I really hope that [the organization] will become such a big thing that everybody on campus will have some basic knowledge about human trafficking, based off all the workshop, and events that we host,” Doyle said. “It would be amazing if this group can expand and inspire other anti-human trafficking groups on other college campuses. It is a really daunting task to abolish modern slavery, but even one person can make a difference.”