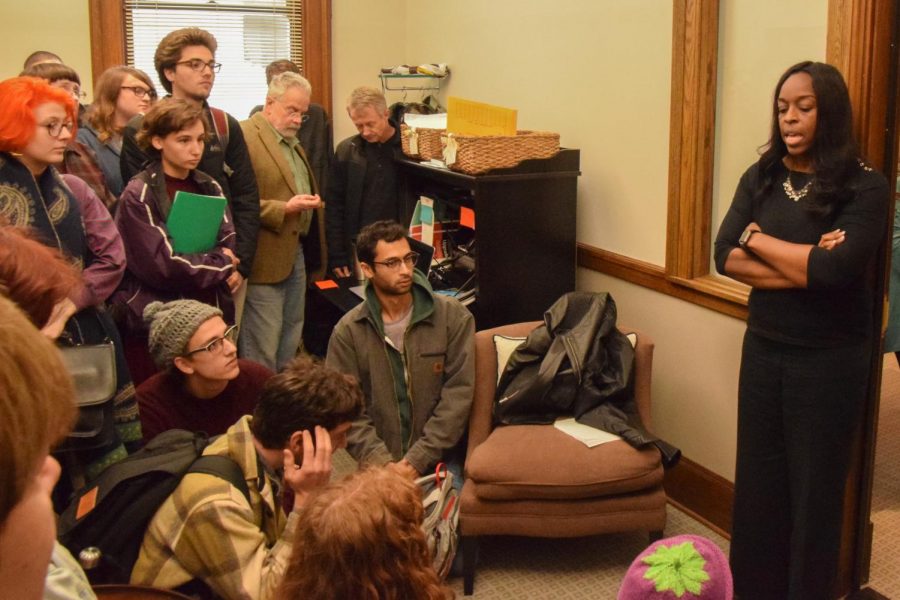 Reid — who had worked at Oberlin since graduating — was let go over the summer as part of a wave of staff reductions due to budget problems. His elimination was met with disapproval by students and community members who valued Reid’s contributions to the College and their Oberlin experiences. The Committee to Reinstate Tom Reid formed in early fall with the goal of reversing the College’s decision.

Supporters congregated in Wilder Hall before proceeding to the Cox Administrative Building to present a list of 1,100 signatures to President Ambar asking for Reid’s reinstatement.

“We won’t stop [supporting] Tom until there is an acceptable resolution [to Reid’s elimination],” he said. “Let’s go advocate for Tom.”

“I don’t doubt the impact that Tom has had on you,” Ambar said to the crowd. “I wish I could say [that] we could keep everything the same. [However,] I owe you the truth, and we are not going to be able to [protect everyone’s job] and be sustainable.”

Ambar pointed to a declining number of high school graduates nationally as well as a growing number of people questioning the cost of private education as contributing factors to the College’s growing deficit.

“If we continued to do nothing, we would have had a cumulative projected deficit of $162 million over 10 years,” Ambar said.

Protestors interrupted Ambar several times and were disappointed with her response.

“Nobody here is doubting that the administration has to make difficult decisions with regards to cost-cutting measures,” Kallas said. “We need to do that in a different way that does not involve taking away the position of someone who has worked here for 38 years.”

In her closing statement, Ambar asked those who disagreed with her to work with the administration to protect the College’s future.

“What I say to all alumni … there are going to be times when you disagree with me. I’m going to need you to find the one thing you do agree with me on and meet me there,” she said. “Here’s why it’s worth it: because the long-term resiliency of Oberlin is at stake.”

“We’re not going to roll over on this,” Shanabrook said.

Supporters encouraged one another to continue the fight.

“We are disappointed the administration does not want to de-escalate this issue,” Kallas said. “We will continue to find ways to advocate about this.”

Some members of the Committee expressed that they received the response they had anticipated.

“I expected [the president’s answer],” Frankel said. “The administration is focused more on the upper-level problems.”

“In total, we’ve received about 75 calls,” said Assistant to the President Ginny O’Dell on Wednesday.

As for Reid, he has since started Tom Reid Coaching LLC, a bowling and mental game coaching company. He told the Review he was surprised to learn the Committee to Reinstate Tom Reid existed.

“I didn’t know there had been a march until Tuesday [after reading the news],” he said.

When asked Thursday if he would accept an offer of reinstatement, Reid did not decisively answer one way or the other.

“I’m not dwelling on it and [am] moving forward. I’d listen, [but] it would depend on what the situation would be,” he said. “I still love Oberlin College and I wish everyone well.”