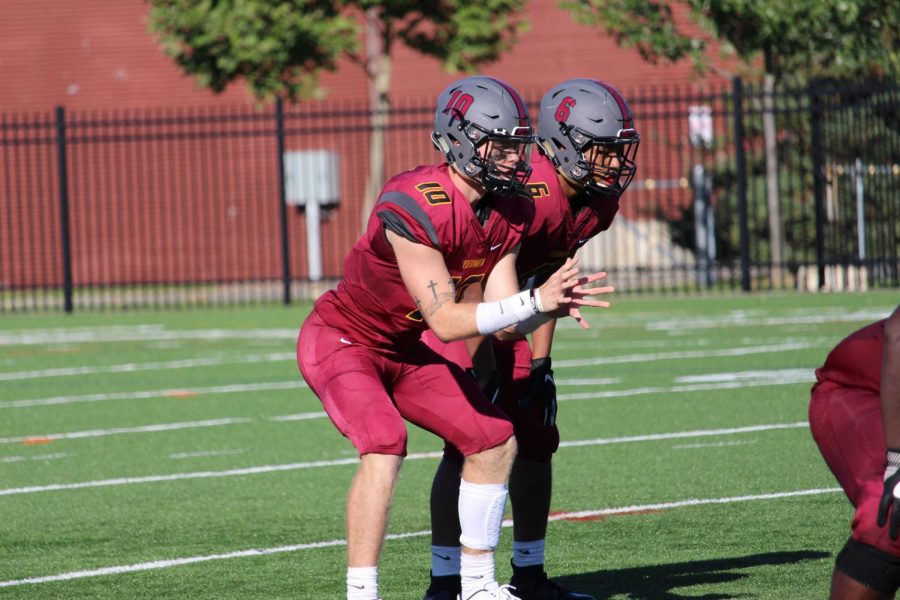 College first-year and quarterback Tommy Jenkins was subbed into the Yeomen’s matchup with the Hiram College Terriers Saturday when College junior and starting quarterback Zach Taylor broke his fibula. Jenkins’ brilliant play led the Yeomen to a victory in double overtime.

In the third quarter of Saturday’s football matchup between the Oberlin College Yeomen and the Hiram College Terriers, the crowd gasped as College junior and star quarterback Zach Taylor fell to the ground clutching his leg. Taylor, who had just become Oberlin’s career total yards leader with 7,096 yards a week earlier, broke his fibula and was unable to re-enter the game.

In a crunch and desperate to take home the win, the Yeomen put in first-year backup quarterback Tommy Jenkins, who has talent comparable to Taylor’s but hasn’t seen much playing time this year. Just a few days before the game, Jenkins himself was in a boot, managing ankle pain that had flared up during practice.

Despite the surprise of being thrown into a tight game, Jenkins didn’t falter. He took the offensive reins and helped propel the Yeomen into double overtime, where they won after junior running back Melvin Briggs ran into the endzone with a walk-off touchdown.

“There were only two minutes left in the third quarter when I had to go in,” said Jenkins, who, before Saturday, had only seen action in two games earlier in the season against Wittenberg University and Kalamazoo College. “But we got the ball back and scored, which eventually sent us into overtime and helped us win.”

Briggs earned North Coast Athletic Conference Player of the Week honors for his performance against Hiram, but credits the team for his success.

“It was a surreal moment to score the game-winning touchdown,” Briggs said. “Our team came together, and we played a complete game. We had dudes step up when their number was called, like Tommy Jenkins.”

Most first-years don’t get many minutes during their rookie season at the collegiate level. Even on a small team like Oberlin’s, newcomers usually spend their first season learning by watching their older teammates, rather than by playing themselves. But when the opportunity came for Jenkins to prove that he was ready to play, he wasn’t nervous.

“Everyone stayed really calm when Zach got hurt, which helped me for sure,” Jenkins said. “I get nervous leading up to games, but once they actually start, I’m never that nervous. I get into the right headspace.”

“When Zach went down in a crucial part of the game, Tommy was as prepared as he could possibly be,” Colarusso said. “He knew all the plays and reads and kept the team composed in a stressful game. That says a lot for a [first-year] to step up as a leader and take control of the game despite having never thrown a collegiate pass before. He is one of the hardest workers I know and deserved his shot to prove himself.”

College sophomore linebacker Luke Buck agreed that Jenkins stepped up for the team in more ways than one.

“Everybody can see the stats and watch the highlights and know that he came up big for us,” Buck said. “What they can’t see is how he stepped up as a leader. Going into and all throughout overtime, guys were looking to him and drawing strength from him. It was special.”

It’s no wonder Jenkins feels comfortable on the field — football has been a part of his life for as long as he can remember. A native of Nashville, TN, Jenkins spent most of his childhood playing football on the playground until he could officially start on a tackle league team in the fourth grade. His family relocated to Blairstown, NJ, for his high school years, and not only did he play all four years at Blair Academy, but his father was — and still is — a Blair Academy assistant football coach.

Much like Oberlin’s squad, Jenkins’ high school team was small but strong and showed him the value of playing sports with a small community.

“I always knew I wanted to play in college, but I really liked the family atmosphere we had on my small high school team,” Jenkins said. “That feeling has really carried over here. The guys are really close and we all hang out together.”

Taylor had surgery this week and will spend the next several weeks recovering, so Jenkins will have another chance to prove himself in tomorrow’s game against Allegheny College in Meadville, Pennsylvania. And there are no doubts among his teammates or coaches that he’ll be ready to rise to the challenge again this week.